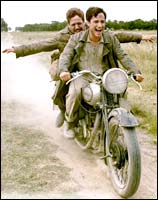 Today, the flying kisses from giddy female fans are mostly for his good looks.

But Gael Garcia Bernal, who had two high profile films -- Bad Education and The Motorcycle Diaries -- at the Toronto International Film Festival, is also getting recognition as an actor of compelling presence.

And yet unlike the bigger Toronto favourite Orlando Bloom, who has had starring roles in big films including Troy and The Pirates of the Caribbean, Garcia Bernal is relatively unknown.

Oscar watchers may remember him as the gentle actor who on Oscar night in 2002 appealed for world peace in a dignified and heartfelt way. It was the same evening where Michael Moore loudly attacked President George W Bush while accepting his Oscar for Bowling for Columbine.

Some stargazers in Toronto knew that Garcia Bernal starred in the Mexican film Y Tu Mama Tambien which was quite a hit in art-houses in North America three years ago. And yet the 26-year-old star has to have a string of hits before the stargazers also recognise him as an actor of charismatic talent.

But things are changing fast for him, thanks to Bad Education, directed by Pedro Almodovar, and The Motorcycle Diaries helmed by Walter Salles.

Garcia Bernal portrays a young Ernesto 'Che' Guevara in Diaries. The critically acclaimed film, detailing a momentous journey Che, then a young medical student, takes with a buddy over 50 years ago, opens in New York and Los Angeles on September 24 and adds screens in other cities in the following weeks. It has already become a hit in Europe.

The film, produced by a group of left-leaning and liberal Hollywood producers including Robert Redford, was one of the sold-out shows at Toronto.

On November 19, Sony Classics will release Bad Education which tells the story of two men, one of whom is a film director, who meet again in the 1980s, 20 years after they attended a Catholic school together during the Spanish dictator Franco's rule. The movie, which received very good reviews in Toronto and packed the festival theatre, is turning into a big hit wherever it has been released.

Garcia Bernal told a press conference for Diaries that he was intrigued by the prospects of working in the film based on Che Guevara's diaries.

The journey, covered by motorcycle, by hitch-hiking and by boat, was pivotal in nudging Che towards a revolutionary career. The medical student had many opportunities to observe abject poverty, disease and exploitation firsthand. The journey spread across thousands of miles mostly in Argentina, Chile, and Peru.

Along with fellow actor Rodrigo de la Serna (Alberto Granada), who The New York Times proclaimed a scenestealer on September 12, Garcia Bernal spent over three months preparing for his part, listening to tapes, watching footage, studying the history of the region.

And yet, he confessed, "I felt scared. I didn't have the grasp, for me, to tell the story."

Garcia Bernal said he received a lot of support and suggestions from Alberto Granada, who is now 83, lives in Cuba and still cherishes his friendship with Che who was killed by government forces in Bolivia in 1967 aged 38.

"He (Granada) said to me, 'Why are you trying to sound like my friend?'" Garcia Bernal recalled. Granada wanted the actor to be truthful to the memory of Che but not try to imitate him blindly. "That was a liberating moment for me," the actor said, "and allowed me to tell the story."

Garcia Bernal said researching for the film and working in it had reaffirmed his vision of a humanistic society. He hastened to add that the violent path undertaken by Che doesn't have to be imitated today. The fall of many military-backed governments in South America showed that changes can be sought to be brought about by non-violent means.

"This film asks: what side of the river do you want to live?" Garcia Bernal said. He knew the answer, of course: "The side where you can make a change."

"A lot of our ideals in Latin America are like a tried horse," the actor continued. "Ernesto Guevara made change pretty resonant, but we are not in the times of Che anymore. Hopefully, this film gives a hint of where we should go back to."

For director Walter Salles, whose movies include the acclaimed Central Station, and who also produced the winner of this year's Oscar for best foreign film City of God, directing Diaries posed one big challenge.

"I did not want to make a biopic or an induced documentary," he said. "I wanted to be faithful to the books, but also faithful to the spirit of the journey. I wanted the adventure to mirror what they had lived 50 years earlier."

The film, he said was really is about discovery and self-discovery," he said. "It was also about getting in terms with a social and political reality."

A reporter asked if the memory of Che Guevara has been "sabotaged" by capitalism, with images of his face on T-shirts to coffee mugs. Salles recalled a story from the Cannes film festival where his film had its world premiere.