Why Priyanka is UNSTOPPABLE!

I have heard cynics say that Priyanka Chopra Jonas as we know her today is the creation of a PR machinery, but that is rather a poor reading of a determined woman and the work she has done to get to where she is.
Aseem Chhabra salutes the movie star on her 40th birthday on July 18. Forty years ago today, a baby girl was born in Jamshedpur's Tata Main Hospital to a middle-class couple, both doctors in the Indian Army.

I don't know if the baby's parents Madhu and Ashok Chopra got a janampatri made for their daughter.

Surely, they would not have believed if they had been told their daughter Priyanka would one day go to the US to study, become Miss India after she returned and before she turned 18, followed by Miss World, a model, a Bollywood star where she would rise to the top of the game.

Then she would walk away from her safety net to start a new career in the US, first as a pop singer and then a lead performer on a prime-time television show. Now she is a star once again, in a country where few had heard her name until 10 years ago.

She is regularly featured on the covers of women's fashion magazines, invited as a guest on popular talk shows, features in Hollywood franchises, has invested in a number of businesses, declared as one of TIME magazine's 100 most influential people, is married to a well-known pop star, and also is a mother.

I have heard cynics say that Priyanka Chopra Jonas as we know her today is the creation of a PR machinery, but that is rather a poor reading of a determined woman and the work she has done to get to where she is.

Of course, PR helps a lot to build the image of a celebrity. But this is not a definite path to fame and success.

The celebrity has to eventually deliver what she has promised to her fans.

There may be some celebrities -- from reality television for instance -- who manage to draw attention without doing any important work but they are mostly treated by the media and audience who consume gossip, as a big joke.

This is what Priyanka's Baywatch co-star Dwayne Johnson aka The Rock wrote about her in a brief introduction to TIME magazine's 2016 list of the year's most influential people: 'She has drive, ambition, self-respect, and she knows there's no substitute for hard work.'

And he added: 'It's an amazing time to watch as she pierces the US market. She has an ability to inspire people to do more and achieve more. When I look at her success from the 50,000-ft view and see everything that Priyanka has already done, is currently doing and has the desire and the bandwidth to do, I can see that her impact is going to be invaluable.' There are various ways to measure a person's success, but no matter what benchmark we look at Priyanka has achieved a lot more than most of her contemporary actors in India.

She had a solid acting career in India before she made home in the US, with quite a few remarkable films like Bajirao Mastani, Dil Dhadakne Do, Barfi and Fashion.

India's first definite crossover star (Karan Johar told me she was 'India's biggest crossover success story'), she has since then managed to develop a parallel career in the US.

Perhaps all of her choices were not outstanding and A-list projects but for every A Kid Like Jake and Isn't It Romantic, where she had supporting roles, Priyanka gave a very fine performance in The White Tiger.

Some critics and even her fans may not have been impressed with her supporting role in The Matrix Resurrections, but at least she found a spot for herself in one of the coolest Hollywood franchises. And in between, she opened Sona, a high-end Indian restaurant in Manhattan with her friend and partner Maneesh Goyal.

In reality, Priyanka is just a creative consultant at Sona, and as The New York Times explained 'she has no ownership stake in the restaurant, but gets most of the media coverage.'

Most articles about Sona refer to it as 'Priyanka Chopra Jonas' new restaurant'.

She has also invested in the French clothing line Perfect Moments with her husband Nick Jonas.

Earlier, she launched a range of shampoos under the brand name Anomaly, and even her own home décor products. Until her marriage to Nick in 2018, Priyanka would shuttle between the US and India.

She still does that sometimes, but it is obvious that her base is in the US.

Even though she is not actively involved in Bollywood, barring playing a lead in The Sky is Pink (2019) and the recently announced Jee Le Zaraa, she continues to be a part of the Bollywood conversation.

This may be largely due to the fact that Priyanka has a high-profile presence in social media, with over 80 million Instagram followers.

She constantly engages with her followers, keeping them abreast about her personal and profession life, often promoting the businesses she has invested in.

She is way ahead in her follower count in comparison to two of the leading Bollywood stars, Deepika Padukone and Alia Bhatt.

Deepika and Alia may have delivered many more critically acclaimed and hit films in recent years, but both stars have slightly under 68 million Instagram followers. Four years ago when I wrote Priyanka's biography, I was often asked one question by the press: What surprised me the most about the actress?

My answer always was that Priyanka walked on an uncharted path, even when there was no guarantee of success (and she did encounter some failures since her transition to the US).

And I will always be impressed with how hard she works, continues to be in conversation, and especially her relentless pursuit to learn and evolve.

At 40, Priyanka Chopra Jonas is unstoppable.

She never gives up. 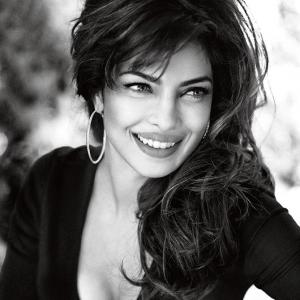