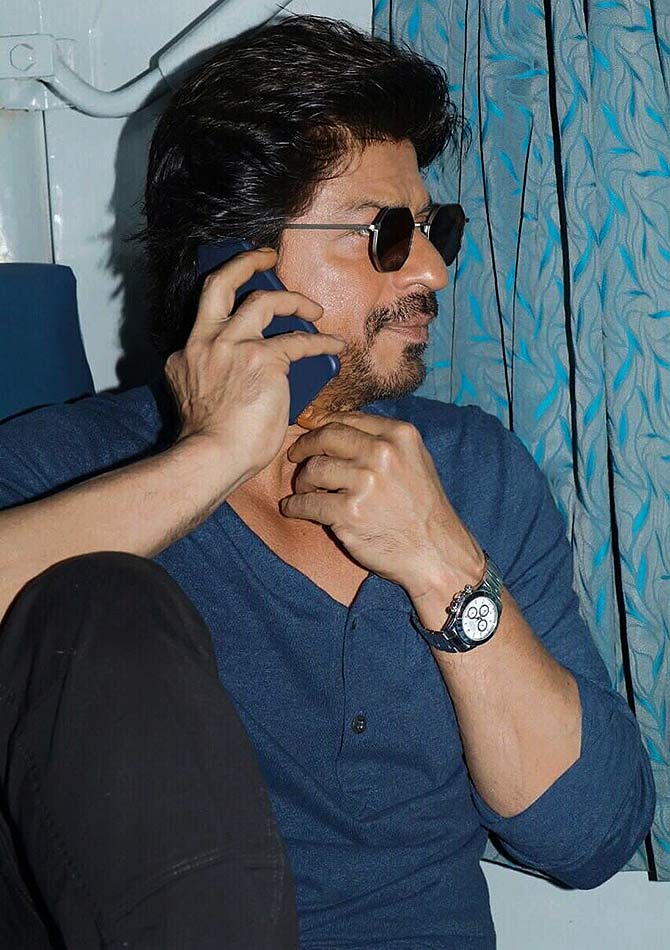 Week after week, in a process that is terribly mechanical and monotonous, movie stars dash from one city to another in trendy attire and publicise their big Friday release.

And then, there are some promotional strategies that make no sense at all. Like, why would someone watch a movie just because someone in it travelled by train? Perhaps I am not star-struck enough to see the appeal in Shah Rukh Khan journeying from Mumbai to Delhi by train to advertise Raees.

As things turned out, it's not just a lacklustre idea but a foolish one as well when the news of a man dying in the disorderly crowd gathered to catch a glimpse of the Khan at Vadodara station spread like wildfire.

Obviously, the actor did not mean for this unfortunate incident to happen but he has ample experience of overzealous fans and ill-equipped infrastructure to take such risks. Could this be the inspiration behind Paresh Rawal's iconic claim in Andaz Apna Apna -- Teja main hoon, mark idhar hai?

Four years before Rajkumar Santoshi's cult comedy was released, Sanjay Dutt starred in and as Tejaa, an eminently forgettable, Western-rip off revenge flick.

Besides bumping off his parents 20 years ago, evil Ranjeet is also responsible for a scar on Dutt's neck caused by a noose. Right before the grown-up Tejaa is ready to punish Ranjeet for his sins, Dutt shows off the mark and reminds him of the same.

Okay, okay, so it's not really an Easter egg but if there's one film that deserves to be dug deep into for the teeniest bit of trivia, it's Andaz Apna Apna.

Sridevi can light up a room from inside a television set.

She may not be as active professionally these days, but I can't think of anyone more electrifying -- how skillfully she imbibes the character of a diva, a devil or a dimwit.

The idea of her as the antagonist in Dhoom 4 is simply irresistible to me. The franchise has only used male villains so far; now, how about focusing on a femme fatale? Even a mediocre action flick like Khiladiyon Ka Khiladi got its edge from Rekha's sultry presence. Besides, Sri and Yashraj have such memorable history anyway.

Dhoom baddies are all about disguises and deceit and we all know Sri's mastery in the area. And she also knows how to have fun with it. 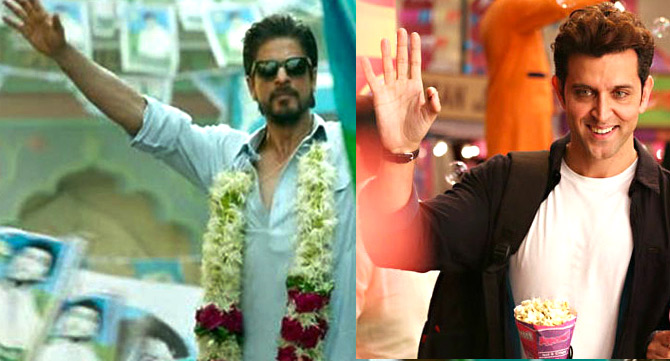 This week at the movies felt a lot like time travel.

Both Kaabil and Raaes are old-school filmmaking overruled by a leading man who takes the law in his own hands and yet retains the entitlement of a hero. If one's driven by revenge, the other is driven by ambition.

As I wrote in my review, 'Kaabil is a done-to-death story -- a shattered husband taking the law into his own hands to punish the men who hurt his wife' and that 'if we are still doing this, something as foreseeable needs skillful deception to engage.'

Hrithik Roshan's commitment to make it work is appreciable but Kaabil's tendency to entertain preposterous notions of a woman's honour and sacrifice for the sake of sentiment made me cringe.

And, while it had its share of problems, I enjoyed a good deal of Raees. Shah Rukh Khan puts a fresh spin on Bachchan's Vijay and applies his intuitive charisma to demonstrate just how bad is bad enough.

But the film's dimaag and daring like in Nawazuddin Siddiqui's winsome cunning. The cat and mouse between him and SRK felt like a spunky recall of Feroz Khan and Amjad Khan's camaraderie in Qurbani.

Even though Pakistani actress Mahira Khan has a strictly supporting role, she's terrific enough to create an impression that firmly states, 'I know him better than anyone else.' (Also, haven't seen such gorgeous, bouncy tresses since Dimple Kapadia.)

Raees gets too busy in the latter chapters when sassy ambition makes way for a sudden burst of conscience. It feels heavy-handed. The climax disappointed me hugely. Still, it's got enough wind in its moments to ensure the period masala leaves us high, not hanging. It's like the world has been taken over by control freaks.

A group of activists in Jaipur storm inside the sets of Padmavati and rough up its director Sanjay Leela Bhansali for allegedly distorting history.

I can't wrap my head around such behaviour. In a country where there's no dearth of real, serious problems, is this what activists strive to preserve? These are no archaeologists or historians but politically motivated protectors of filthy ideas that have no place in history.

Also, these guys need to watch television where pretty much everything from mythology to history to science is mangled to manufacture entertainment. The tragedy is that such activism is selective; the bigger name it attacks, the louder the noise it attracts. Within minutes of watching journalist Rajeev Masand's delightful interview with Rishi Kapoor, discussing his autobiography, I am signed into Amazon buying the Khullam Khulla ebook.

I devote the whole night to reading this extremely entertaining, unputdownable memoir of an actor who doesn't hold back or mince words. There's no style, structure or fancy words but there's honesty and pluck, pages and pages full of it as he rattles off about his family, friends, films and fraternity.

I liked the frankness with which he spoke about the women in his father Raj Kapoor's life or Amitabh Bachchan's lack of acknowledgement for the part his co-heroes played in his phenomenal success. I was happy to know his grandfather Prithviraj Kapoor and director Yash Chopra, also two of my favourite people, a little more closely through his fond recollections.

I laughed loudly at the bits from his childhood, all those hilarious episodes starring Shammi Kapoor and what he thought Amar Akbar Anthony would originally be about.

I admired the detached attitude of his self-assessments. As proud he is of his performances, he's quick to make light of his blunders or even those of his co-stars -- be it Urmila Matondkar's dancing, Kumar Sanu's singing or Ranbir Kapoor's choice of films.

It was bittersweet reading about his altered equation with best friends Rakesh Roshan and Jeetendra. 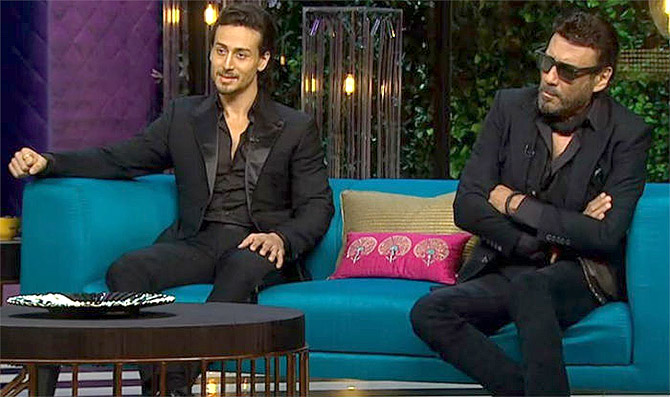 Koffee With Karan is at its least gossipy when Karan Johar chats up the dashing father-son pair Jackie and Tiger Shroff.

The duo is a character study in contrasts. Where body language goes, Tiger's composure brims with grace even as Jackie is fidgety and playful. But the latter's lack of affectations, the trademark 'Bhidu' vibe lends this episode of KFK a unique humour and charm.

All through the episode, Jackie doesn't shy from loving demonstrations, gently rubbing his son's arm or defending him -- 'It's not ego.' It's an endearing sight that prompts KJo to admit just how wonderfully affectionate his late Papa (Yash Johar) was as well.

My favourite moments from the show:

When Tiger compares working with Amrita Singh in Flying Jatt to having his dad around because of how freakily alike their temperaments are.

When Jackie discloses that his late-night conversations with neighbour Aamir Khan include topics like water harvesting, seeds and plants.

When filmmaker Vidhu Vinod Chopra reveals how Jackie offered to pay for the some of the sets on 1942: A Love Story because of his commitment to the authenticity of a scene.

When we caught a glimpse of his co-star Meenakshi Seshadri, looking ravishing as ever, lovingly speak of her Hero after decades. 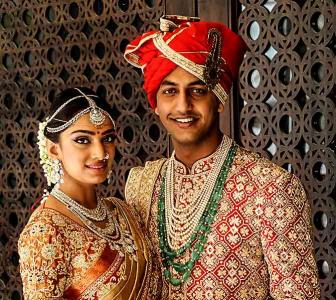 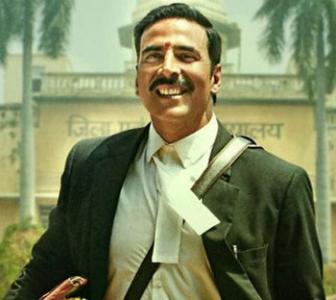 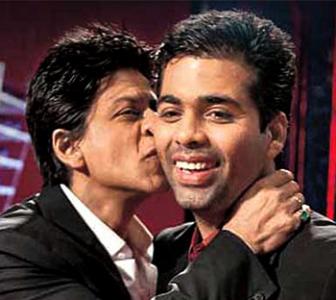 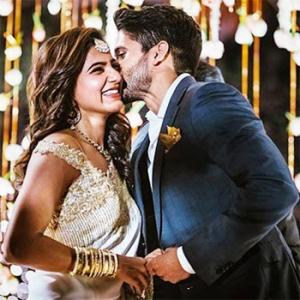