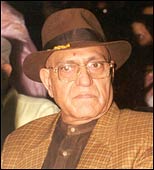 The mortal remains of veteran Bollywood actor Amrish Puri were today consigned to flames at the Shivaji Park crematorium in Mumbai. Prominent members of the film industry paid their last respects to the actor who passed away on January 12, after a brain haemmorhage.

The body was brought from Hinduja Hospital to his suburban residence earlier this morning. The flower-bedecked body was kept at his Juhu residence for members of the film industry, and his fans to pay their last respects.

From the world of politics, Maharashtra state PWD minister Chhagan Bhujbal, former Jammu and Kashmir [Images] chief ministerFarooq Abdullah and former state minister Kripashankar Singh were among those who offered floral tributes to the screen legend.