The aircraft, which has been grounded since March following two fatal crashes which killed 346 on board, is crucial to Indian low-cost airline SpiceJet’s fortune, which has up to 205 aircraft on order.

With the grounding, the airline’s capacity expansion plan is suffering. 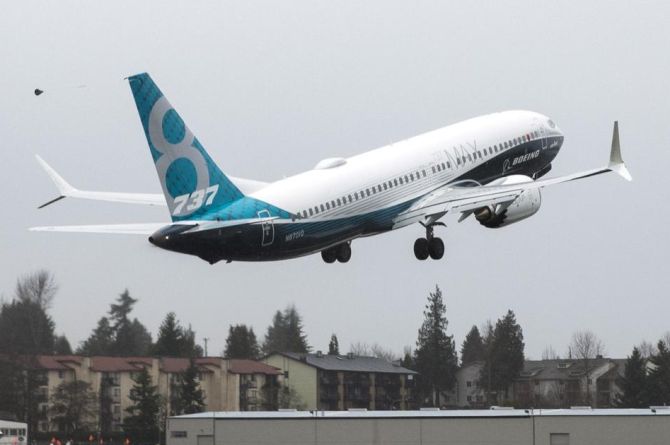 Boeing has started negotiations with Indian aviation regulator Directorate General of Civil Aviation (DGCA) for return of the grounded 737 MAX to service.

Crucial among them is a demand that the US-based plane maker provides simulator training centre to pilots.

Additional but costly simulator training for pilots may dent the cost benefit of the aircraft as minimum hours of transition training (as low as one hour) for pilots was the main selling point among low-cost carriers across the world.

“One of the key observations from Indian aviation regulator is pilots flying the 737 MAX will require additional simulator training.

"Ideally airlines would want the simulator to be based out of India, but if not, SpiceJet will send its pilots to the Singapore-based simulator for training,” said a person aware of the development.

The aircraft, which has been grounded since March following two fatal crashes which killed 346 on board, is crucial to Indian low-cost airline SpiceJet’s fortune, which has up to 205 aircraft on order.

With the grounding, the airline’s capacity expansion plan is suffering.

The primary reason behind the crashes has been found to be faults with the anti-stall system called Maneuvering Characteristics Augmentation System (MCAS), which the company said is trying to redesign.

The Indian aviation regulator has said pilots would need additional training on the new design.

“Simulated training for pilots in the new MCAS is a must,” said a person aware of the development.

A top Boeing executive said the company is in discussions with DGCA about the necessary work required to press the plane into service.

Boeing has tested over 800 test flights on this aircraft and the company is working on improving the training process, said Darren Hulst, director-product, forecast, and current market, Boeing Commercial Airplanes.

“Boeing is providing regulators around the world, including the DGCA, with detailed information regarding the 737 MAX,” said Salil Gupte, president at Boeing India.

Unlike normal circumstances, when regulators across the world follow the lead by the regulator of the country where the aircraft is manufactured (in this case US aviation regulator Federal Aviation Administration (FAA), since Boeing is based out of US), regulators around the world approve the grounded jet to fly at their own pace instead of following the American regulator.

DGCA officials had met Boeing and FAA executives during global aviation conferences at Kathmandu and Montreal where Boeing tried to impress upon DGCA about the safety of the aircraft.

“We will take our own time. We want to be absolutely sure,” said a senior DGCA official.

The return of the 737 MAX is intricately connected to Boeing’s fight of market share with Airbus in India as its European rival has left it behind in the race for single-aisle aircraft market, while Boeing still maintains a grip over the wide-body market winning new customers like Vistara.

SpiceJet boss Ajay Singh recently said that delay of return of the 737 MAX may force him to open negotiations with Airbus for an order.

“Airbus has pushed us hard since the day we started flying Boeing aircraft, and of course with the current problems, they’ve pushed us harder,” Singh recently said.

However, Hulst recognising the importance of the Indian market said the company will continue to work for orders from carriers.

"This market continues to be one of the fastest-growing in the world and greatly interests us.

"We see tremendous potential for even more growth as India’s middle class expands and more consumers are able to fly,” he said.