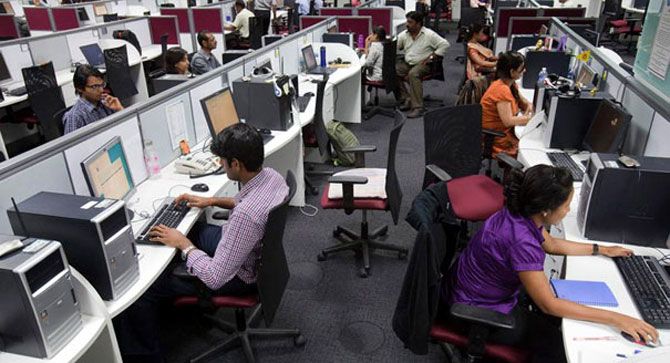 For the export-driven Indian IT services industry, the year 2018 did not start on a very positive note.

In the fiscal year ended March 31, there were fewer additions to jobs on a net basis.

Banking, financial services and insurance, the largest revenue earning sector, was still battling with its own set of issues.

Also, there was a pause in spending by healthcare clients due to the scrapping of Obamacare and retail clients were completely devastated by the Amazon onslaught.

However, as the year progressed, the sector pulled a spectacular turnaround, with most companies upbeat on ending the year on a high single-digit to double digit-growth.

In January, only TCS was announcing large deals with the likes of M&G Prudential and Rolls Royce while there were concerns on IT clients cutting spending. This was due to the low demand environment, so year-on-year growth of the top five IT players had taken a hit.

The BFSI sector was entirely on a wait-and-watch mode.

But over the year, each of the IT services players went all out to train and hire better sales teams and target clients aggressively.

The results were clearly palpable in the June quarter onwards.

Infosys, for example, signed deals worth $1.12 billion during the quarter, the highest ever total contract value signed by the firm in the last 15 quarters while HCL added 27 new deals in one go.

The trend continued in the subsequent quarter (July-September) as well.

By Q2, Tech Mahindra, posted an all-time high net new deal wins with TCV of $550 million while Infosys recorded its best large-deal wins in a quarter with TCV of $2 billion.

TCS reported its quarterly large deals with $4.9 billion in TCV (compared to $4.8 billion in Q1FY19).

Even though Wipro did not share this number, the firm indicated a good quarter of order-booking which should augur well for the second half of FY19 and beyond.

Not only have North American clients turned around but the IT sector has leveraged a number of new geographies like Europe, Japan and Australia effectively.

This year also witnessed TCS racing ahead of its Indian peers into the global IT race, almost neck and neck with Accenture.

Subsequently, industry-wide digital revenue share has grown over 50 per cent y-o-y with most firms reporting almost 25-30 per cent digital share in the latest quarter.

"Stronger demand environment was helped by continued increase in digital sizes, aided by shift in spending to core transformation and integrated digital deals.

"This was opposed to the consulting-heavy phase earlier and continuing momentum of deals signed that will flow into revenues in the early part of the year," noted Kanwaljeet Saluja, analyst at Kotak Institutional equities.

Similarly, on the employment front, the sector had a very slow first half as it still reeled under the impact of job losses and lower hiring from 2017.

Consequently, employee utilisation levels peaked across most companies while many even deferred their regular salary hike cycle or split it across few quarters to ease margin pressure.

Yet, as the year ended with a good demand environment, companies have already boosted hiring both on and off campus, including lateral hires.

The campus recruitment season in 2018 witnessed a comeback by companies that had been keeping a low profile, as well as IT mid-caps that have been vocal about hiring.

Most importantly, to offset the rising visa concerns in their primary market of North America, every single IT player, irrespective of their size, has been hiring locally.

Local hiring has been offset by large number of US-based innovation hubs set up by companies like TCS, Infosys and Tech Mahindra as they seek to train their new recruits.

The sector has also followed global IT leader Accenture in full swing in 2018 to make large mergers and acquisitions not only to access new client bases but also to acquire expertise in digital technology.

Even TCS, which had been keeping clear of acquisitions, with internal skilling as top focus, acquired boutique consultancies, adtech and design firms just like Infosys, Wipro, Cognizant, and Tech Mahindra, which are hinting towards a sector-wise appetite for new service offerings. 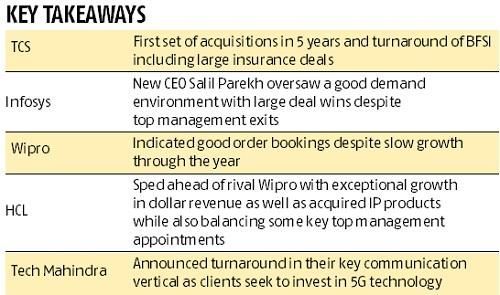 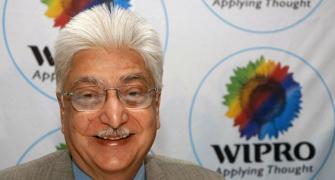