News
Business
Movies
Sports
Cricket
Get Ahead
Money Tips
Shopping
Sign in  |  Create a Rediffmail account
Rediff.com  » Business » Why this hum and haw over Google buzz

Why this hum and haw over Google buzz

When Sanjeev Handa logged on to check his Gmail a week back, he was welcomed by a screen which invited him to join Google Buzz or proceed to check his email. "I was pleasantly surprised, but did not know what the buzz was about," he said, adding: "When I clicked on the link, it asked me if I wished to connect with my Gmail friends. I thought why not?" 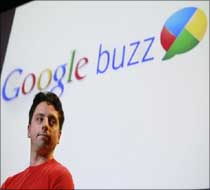 Handa is one of the nearly 176.5 million Gmail users who have impulsively clicked on Google Buzz, scaring the life out of other micro-blogging sites like Twitter and social networking sites like Facebook and MySpace.

"Where else can you get such a massive installed base with a single click? By building Buzz directly into Gmail, the service has an instant audience," says Mahesh Murthy, founder and chief executive officer of search marketing firm Pinstorm.

It is hard to start a social network from scratch, which explains why Orkut has not made much of a dent in markets like the US.

On the other hand, since its launch, Google has been buzzing all across with over nine million posts and comments. There were tweets on "Google Buzz" within every 11 seconds and technology forums were discussing Buzz with over 1,000 posts per day.

Incidentally, there are now more than 200 Yahoo! and third-party sites that feed into Yahoo! Updates. These include Flickr, Twitter, YouTube, Yelp and Yahoo! But the Buzz around Google (like all its other products) is very strong. Why is it so? Buzz can be said to be a stream of status updates, pictures, links and videos from your friends. You can "like" these items and comment on them.

And if you use Flickr, Picasa, Google Reader or Twitter, you can automatically have those items imported into your stream. Buzz also recommends items you may like based on your friends' activities. "The first thing we do when we find something is to share it," reasons Google, adding: "...more sharing happens online".

Google Buzz resonates a lot with FriendFeed but with a massive installed user base - all of which has literally made it the talk of the town (rather world).

"Google Buzz has created a whole new platform for promoting brands to create visibility through Google profiles. It would be bliss for the new age of spammers, because spam would not be in the guise of emails anymore, but in the shape and size of Buzz," points out Moksh Juneja, social media analyst.

Google had a gap in its offering when compared to Facebook and the introduction of Buzz could help it establish a Google-searchable social network. Users, however, do not see Buzz as a Facebook-killer. Subhash Pais, business head at i9 Communications, would like to see Buzz evolve more.

"Too many people are sceptical about Buzz, and are running it down as a Twitter 'me too'. Buzz needs to be given time."

From Orkut to Lively to Google Friend Connect and beyond, Google has tried to succeed with social products that just haven't caught on. But for Singapore-based automobile designer, Bikram Haldipur, Buzz was the most logical step for Google. "It's built right into my Gmail page, so I don't have to invite a new set of friends from the scratch. I am already following 54 friends and their updates," he says.

Nineteen-year-old Pune University student, Ankita Lunawat, wondered on her Facebook page: "It seems to me that Google Buzz is exactly what Google Wave should have been in the first place." Google Wave, launched last year, was intended to be an online tool for real-time communication and collaboration.

Vikram Shirur, manager (corporate communications) at Victorinox India has not taken to Google's latest social networking tool. "Having one window for social networking and mails is irrelevant. I wouldn't like mixing my business contacts with Buzz without my approval on Gmail."

Shirur is referring to the default settings on Buzz, where people you follow and the people that follow you are made public to anyone who looks at your profile. In other words, before you change any settings in Google Buzz, someone could go into your profile and see the people you email and chat with most.

The user's online identity has evolved beyond the email address and it is unlikely that one's entire social network uses the same email provider, argue users. "One need not know an email address to find someone on Facebook or Twitter, making connecting an easier process than it will be on Gmail," said New Delhi-based Kiran Khemani, social marketing specialist, over a Facebook message.

Khemani believes the social functionality will enhance the Gmail experience but the new product does not appear to provide a compelling reason to switch from Facebook to Gmail for social networking.

But will Buzz do a Twitter eventually? The number of Twitter users has risen 75 million, but the growth rate of new users is slowing and many Twitterers are inactive, according to a new study by RJMetric Inc, which develops online metric analysis software.

The rate of new user growth peaked last July to about 7.8 million a month. That number has dropped to about 6.2 million new users a month. Twitter, according to the report, has between 10 million and 15 million active tweeters. Earlier, HubSpot - a Cambridge, Mass.-based Web analytics company - revealed that the number of users joining Twitter started to drop off dramatically last fall.

And what about privacy concerns? Google announced some changes to Google Buzz. It will now ask Buzz users, "How do you want to be seen to others?", when they log into the service for the first time.

The default option will be, "Show the list of the people I'm following and the list of people following me on my public profile," but that box can be unchecked and the option is easier to find than the convoluted process that was required to hide that list prior to the update. Tibrewala feels, "Within 24 hours, Google had addressed the privacy concerns and Buzz now distinguishes between followers with public profiles and those with private profiles." Google, though, is yet to Google Buzz to its Privacy Dashboard.