This is part of an 'aggressive and decisive set of action' to shore up the company. 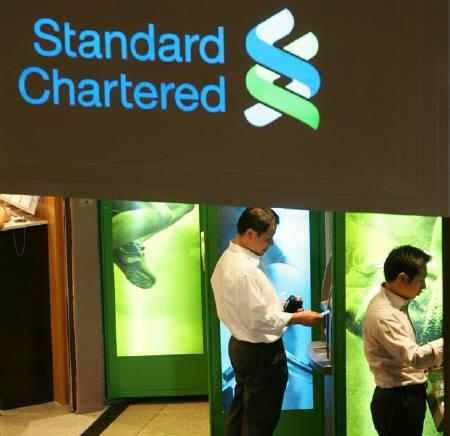 Standard Chartered said it would axe 15,000 jobs and raise $5.1 billion by selling new shares as its new chief executive set out plans to restore profitability to a bank hit hard by an economic slowdown in emerging markets.

It will cut 17 percent of the workforce to reduce costs by $2.9 billion by 2018, and sell or restructure $100 billion of loans, on a risk-adjusted basis - or a third of its total.

CEO Bill Winters, a former JPMorgan investment bank boss who took the helm of Standard Chartered in June, described this as an "aggressive and decisive set of actions" to shore up the company.

It was the fifth successive quarter of falling revenue for StanChart, hit by an economic slowdown in Asia - where it earns more than two-thirds of its profits - and rising bad loans, as well as weakening currencies in the region compared with the dollar, in which it reports its results.

Its London-listed shares were down 6.2 percent at 669 pence by 0910 GMT, the worst-performing stock on the European bank index.

They have fallen 31 percent this year, partly due to expectations Winters would launch a rights issue and also on the Asian slowdown.

"Post restructuring and recapitalisation Standard Chartered will be a stronger and more focused group. But the group will remain a complicated work-in-progress during the upcoming years," said Ronit Ghose, analyst at Citi.

Winters was appointed after previous CEO Peter Sands failed to reverse the company's fortunes with restructuring efforts that saw him axe over 4,000 staff.

The rights issue, StanChart's first capital-raising in five years, will be launched on Tuesday at a price of 465 pence per share, a 35 percent discount to its last traded price in London.

Two new shares will be issued for every seven existing shares.

StanChart said Singapore's Temasek, the bank's top shareholder, had indicated it intends to take up its full allocation of the issue, representing 15.8 percent of the existing share capital.

"[There is] still a lot of hard work to put in but the path is clear," said Hugh Young, managing director at Aberdeen Asset Management, the bank's second-biggest shareholder, in an email.

Standard Chartered also said it would not pay a final dividend for this year, saving the company $700 million.

The capital-raising and asset-restructuring will together push the bank towards a new common equity tier-1 capital (CET1) ratio goal of 12-13 percent, according to the company.

The bank's current CET1 ratio - a measure of financial strength - fell slightly in the third quarter to 11.4 percent. It will increase to 13.1 percent after the rights issue.

Analysts had expected that Winters would wait until after Bank of England stress test on Dec. 1 before announcing the widely-expected rights issue. StanChart said British regulators were aware of the bank's plans and had not objected.

"The capital-raising is clearly good from our viewpoint and so is credit positive. But they have a lot of restructuring costs to get out of the way and so will need more capital to cover these," said David Marshall, credit analyst with independent research firm CreditSights in Singapore.

© Copyright 2021 Reuters Limited. All rights reserved. Republication or redistribution of Reuters content, including by framing or similar means, is expressly prohibited without the prior written consent of Reuters. Reuters shall not be liable for any errors or delays in the content, or for any actions taken in reliance thereon.
Related News: StanChart, Standard Chartered, CET1, CEO, Bank of England
SHARE THIS STORY
Print this article