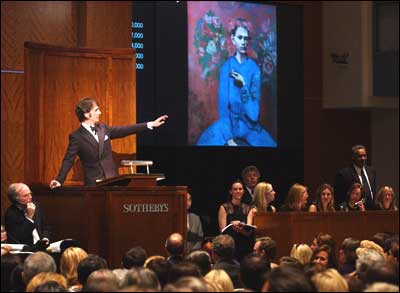 FROM THE GREENTREE FOUNDATION: The painting was one of 34 pieces on sale from the Greentree Foundation from the collection of Mr and Mrs John Hay Whitney.

The painting was bought for $30,000 in 1950 by John Whitney, a former US ambassador to Britain. It was being sold by the Greentree Foundation, a philanthropic body created in 1982 by his wife, Betsey, after the death of her husband.

Tobias Meyer (L) of Sotheby's points to bidders during the sale of Pablo Picasso's Garcon a la Pipe (R, image projected on a screen) which eventually sold for $104,168,000. A row of Sotheby's employees below the painting and a man (L)

take phone bids for the artwork.

Start: The world's most expensive painting!