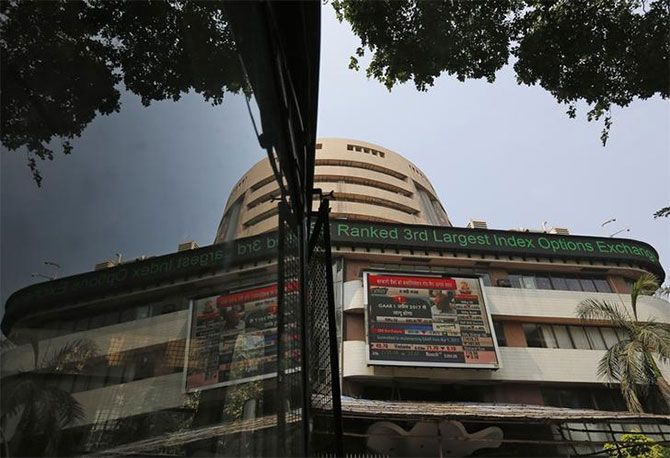 However, the downside was limited due to buying among oil & gas segment. Investors are eagerly waiting for teh ECB minutes later today.

Mustafa Nadeem, CEO, Epic Research adds, "Nifty ended down for second consecutive day making a 'Long Black Candlestick' after a bearish belt hold confirming the intermediate trend to be in grip of bears. The importance of the current bearish moves is upper resistance trendline drawn from recent peaks of 8,968 coupled with third top confirmed after formation of bearish belt hold. Pattern wise we are forming a h&s and current downmove may validate to be right shoulder on breach of 8,590."

Globally, European and Asian stocks rose as a healthy US economic report and rising oil prices overnight bolstered investor optimism. Markets in mainland China were closed for a weeklong holiday.

Oil futures dipped on Thursday after Saudi Arabia trimmed the price of its flagship physical crude to Asia, but were still near more than three-month highs following a drop in US crude inventories.

Back home, IT, FMCG, pharma, banks, realty and auto sectors were the main draggers in trades today. However, oil & gas sector outperformed with BSE Oil & Gas index rising by over 2%.

Top losers from the Sensex pack were M&M, NTPC, ITC, ICICI Bank, Axis Bank and Dr Reddy’s Labs, all falling down between 1%-2%. On the gaining side, GAIL, RIL, HUL, ONGC and Maruti Suzuki rose between 1%-4%.

In view of weak power demand, the dispatch of coal by Coal India (CIL) to power sector declined by 12.7 per cent to 26.4 million tonnes (MT) in August this year. Coal India slipped by 1%.

The Cabinet Committee on Economic Affairs on Wednesday gave its nod to the acquisition of 11 per cent stake in Russia’s Vankor oil fields by ONGC Videsh (OVL) from Rosneft Oil Company for $930 million, which will take its overall stake in the project to 26%. Shares of ONGC gained almost 1%.

Jindal Steel and Power said on Wednesday it had not made interest payments due on some of its non-convertible debentures, underscoring the size of the debt-laden company's woes. The stock slumped by 6%.

Grasim Industries was up over 2% on the BSE after the stock turned ex-stock split in the ratio of 5:1 on Thursday.

Indian Oil Corporation (IOC) rose over 5%, after hitting all time high of Rs 659. The state-owned oil marketing company has fixed October 19, 2016 as the record date for 1:1 bonus issue.

Goodyear India surged around 13%, hitting new high of Rs 921 on the BSE in intra-day trade, after Goldman Sachs bought stake in tyre maker through open market.