India was the flavour of the year, at least in the FMCG sector, as multinationals hiked stakes in their subsidiaries lured by long term potential of the country, while homegrown executives made their way to top hierarchy of global firms in 2013. 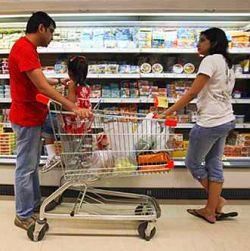 The Indian FMCG sector, which is currently pegged at around $13.1 billion, also saw various challenges in the form of subdued demand despite good monsoon and bumper harvest that were expected to boost rural sales.

Unilever, GlaxoSmithKline and PepsiCo made big bang announcements during the year as they decided to enhance their play in the "strategic and emerging" Indian market.

It, however, fell short of its target of 75 per cent from the earlier stake of 52.48 per cent due to lukewarm response from the shareholders to the offer.

Likewise, UK-based GlaxoSmithKline (GSK) also hiked its stake in its consumer healthcare arm in India to 72.5 per cent from the earlier 43.2 per cent stake in a transaction worth Rs 4,800 crore (Rs 48 billion).

Towards, the end of the year, the UK-headquartered firm, which terms India as a key emerging market, also announced plans to raise stake in its Indian pharmaceutical arm for a total consideration of Rs 6,389.02 crore (Rs 63.89 billion).

The year also saw global beverages and snacks major PepsiCo announcing to invest, along with its partners, Rs 33,000 crore in the Indian operations, as a part of which it announced to set up the company's biggest beverages plant in Andhra Pradesh at an outlay of Rs 1,200 crore (Rs 12 billion).

Signifying the importance of the Indian market, PepsiCo Chairperson and CEO Indra Nooyi said the company was making the investments in order to more than double the capacity of the business in the country by 2020.

PepsiCo's announcement came more than a year after its arch rival Coca Cola had said it, along with partners, would invest $5 billion in India by 2020 on various activities, including setting up of new bottling plants.

The Atlanta-based firm reposed its faith in the Indian market and said it won't slow down its $5 billion investment plans in India despite the current slowdown, saying it expects the country to be in its top five global markets within the next seven years.

The huge investments in the sector notwithstanding, analysts said the impact of good monsoons and bumper harvest has not been reflected in the increasing rural demand so far.

"However if demand starts improving in first quarter of 2014 calender year, it would be not only due to monsoon but higher spending in tier II and tier III cities and rural areas ahead of forthcoming elections," Prabhudas Lilladher Senior VP Research Amnish Aggarwal told PTI.

Meanwhile, on the positive side, 2013 witnessed many Indian managers taking over global roles in their respective firms.

In a major change in its organisational structure, Coca Cola promoted India and West Asia CEO and President Atul Singh, as Deputy President of the company's Pacific Group.

Besides, Gautham Mukkavilli was promoted as Senior Vice President, Business Transformation – AMEA (Asia, Middle East and Africa) to be effective from March 1, 2014.

During the year, PepsiCo also roped in former Nokia head for emerging markets, including India, D Shivakumar as its Chairman and CEO, India Region.

This followed the departure of its India Region President Manu Anand after working with the company for 19 years.

FMCG giant Hindustan Unilever Ltd (HUL) also saw its CEO Nitin Paranjpe taking up a global role at parent Unilever and become the President, Home Care, of the FMCG giant.  He was replaced by Sanjiv Mehta, who is now the MD and CEO of HUL.

In a significant move, Nestle India's board approved an increase in royalty payment by 0.20 per cent per year for the next five years to its parent firm, thereby enhancing it to 4.5 per cent of the sales. Nestle SA had asked two years ago for a review of the two decades old royalty rates.

Later, the company also inked a pact with private equity firm Creador to divest its non-core food business in Indonesia for an undisclosed amount.

Marico demerged its Kaya skin care business into a separate entity and listed it independently on bourses.

Kaya skin care business, which was launched in 2002, has 82 clinics in 26 cities across India, 19 clinics in the Middle East and 2 clinics in Bangladesh.

Despite the year being quite eventful, Aggarwal points out that the double digit food inflation and uncertainty regarding employment has impacted the consumer sentiment and demand.

The impact of an economy in a downturn was also felt in the Rs 45,000 crore (Rs 450 billion) consumer durables sector, as the industry tried hard to deal with slump in demand on one hand and the effect of rupee depreciation on the other.

Rupee depreciation squeezed margins of companies as import of components pushed up input costs. It forced them to hike prices by up to 10 per cent across the products twice in 2013.

"During 2012, the industry had a turnover of around Rs 45,000 crore and this year by an large it was same. There were some marginal gains on some products but again in some segments as home appliances, there was a degrowth due to decline of the economy," Consumer Electronics and Appliances Manufacturers Association (CEAMA) Secretary General Suresh Khanna said.

In terms of new technology hitting the market, this was the year when ultra high definition (UHD) TV sets were launched in India by global manufacturer such as Sony, LG and Samsung priced up to Rs 27 lakh.

As 2014 knocks at the door, FMCG and consumer durables players will be hoping that the new year will bring some cheer on the sales counter at least.
Munish Shekhavat and Kumar Rahul in New Delhi
Source: PTI© Copyright 2021 PTI. All rights reserved. Republication or redistribution of PTI content, including by framing or similar means, is expressly prohibited without the prior written consent.
Print this article