The Comptroller & Auditor General of India has castigated the Maharashtra government for alleged irregularities in the sale and allotment of land in the past eight years, resulting in loss to the exchequer. 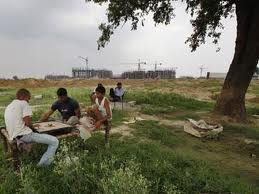 The CAG report, findings of which encapsulated in a CD, was presented by BJP legislator Devendra Phadnis to the state Assembly Speaker, has made critical observations on the plots allotted to parties, including ministers and legislators.

The top auditor has also pulled up the government for the land it allotted to the Ashirwad Cooperative Housing Society, promoted by current and former ministers and legislators.

The CD containing the report has been in circulation, but -- as the state government clarified on Wednesday -- no pertinent CAG report has so far been tabled in the legislature. Chief minister Prithviraj Chavan said he had not received a file relating to the auditor's conclusions. "Therefore, I will not like to make any comment," he said.

Assembly Speaker Dilip Walse-Patil said a CAG report, being an audit, would not become a valid accusation even if it blames a minister or legislator for a suspected flaw. "Such things will have to be examined by the Public Accounts Committee," he added.

According to the report, though land was allotted to Ashirwad in 2004 and its possession was handed over to the society in April the following year, the actual execution of the agreement between it and the Mumbai suburban district administration took place four-and-a-half years later -- in December 2009.

It was also found two members who had flats in Ashirwad had subsequently acquired flats in another society, violating the Maharashtra Land Revenue Code.

On the allotment of land to Mumbai Education Trust in Nashik, the CAG said it was done on occupancy right basis for medical and engineering college at a price of Rs 7.53 lakh.

This allotment was in addition to an earlier allotment of land measuring 41,300 square metres made in November 2003 at an occupancy price of Rs 1.55 lakh.

The allottee, the report said, "was the nephew of the state public works minister from whose department the land was transferred." Thus there was apparent "conflict of interest" in transfer and allotment of this land.

On the allotment to the Sindhudurg Shikshan Prasarak Mandal, the CAG observed that the Trust that was meant for educational purposes acquired government land on concessional rate of lease for the purpose of community centre and used if for commercial purpose.

This has resulted in breach of terms and conditions. As such, the land was required to be resumed by the government along with a structure on it. The cost of the land was Rs 6.68 crore (as per the Ready Reckoner of 2010), but was allotted to the Mandal for a meagre amount.

According to the CAG, scrutiny of the land records revealed that the Collector of the Mumbai Suburban district, while allotting the land to Manjra Charitable Trust in Borivali through a letter dated November 23, 2006, did not make a mention about the basic condition regarding the "completion of the entire work within a period of two years so as to commence educational activities".

While scrutinising the records, it was noticed that out of four applicants for the said plot of land, the chief minister had approved the application of the Manjra Charitable Trust for allotment of land in preference to three other applicants without assigning any specific reasons for the preferential allotment.

Though four years have elapsed after taking possession of the land, it was not put to use for the intended purpose. The non-mentioning the mandatory clause deprived the government its chance to get back the land. On its part, the Trust got the privilege of retaining it by paying only Rs 6.56 crore against the market value of Rs 30.37 crore as per the ready reckoner of 2006 on occupancy rights basis.

The auditor has suggested that the government should prescribe a mechanism to conduct periodic surveys to ensure that the land allotted was being utilised for the purpose for which it was granted, and that the terms and conditions under which land was allotted was not being used.