Brace for a hot summer in North India

'The season averaged maximum temperatures in Himachal Pradesh, West Rajasthan, Konkan, Goa, Coastal Karnataka, Kerala and Arunachal Pradesh are likely to be higher than normal by 0.5-1.0 degree Celsius,' the Met department has said in its forecast. 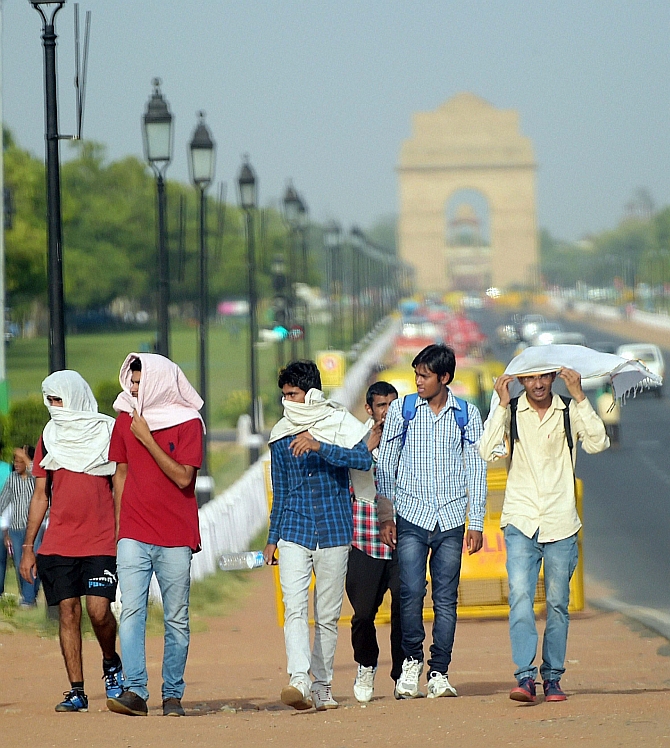 North India -- which comprises states like UP, Punjab, Haryana and Rajasthan -- along with parts of southern and north-eastern areas of the country may experience 'above normal' summer in the March-May period this year, the India Meteorological Department has said.

In the rest of the country, the temperatures are expected to be normal over most subdivisions.

"The season averaged maximum temperatures in Himachal Pradesh, West Rajasthan, Konkan, Goa, Coastal Karnataka, Kerala and Arunachal Pradesh are likely to be higher than normal by 0.5-1.0 degree Celsius," the Met department has said in its forecast.

It also said there is 37 per cent probability of the maximum temperatures in 2019 being above normal in the core heatwave zones of Punjab, Himachal Pradesh, Uttarakhand, Delhi, Haryana, Rajasthan, Uttar Pradesh, Gujarat, Madhya Pradesh, Chhattisgarh, Bihar, Jharkhand, West Bengal, Odisha and Telangana.

On El Nino, which is expected to impact the southwest monsoon, the IMD said that at present near borderline El Nino conditions are prevailing over the equatorial Pacific Ocean and this is expected to persist during the March-May period and weaken thereafter.

A weak El Nino augurs well for the southwest monsoon season in India which immediately follows the summer months.

Private weather forecasting agency Skymet, in its early monsoon forecast released last week, had forecast that rains have more than 50 per cent chance of being 'normal.'

The forecast will be updated in April after more details pour in and the current prediction is based on weather patterns available till January end, said Skymet CEO Jatin Singh.

The overall national forecast has little consequence on final agriculture harvest as much depends on timeliness, spread and distribution of the southwest monsoon over the critical rainfed regions of the country.

The State-run IMD is expected to release its first forecast some time in April.

A normal monsoon in 2019 could augur well for the country's agriculture sector and boost crop yields.

But it could further depress prices, hurting farm incomes unless credible measures are taken to dispose of the surplus.

In 2018, Skymet, in its first monsoon forecast made in April, had said that rains are expected to be 'normal', that is, around 100 per cent of the long period average (LPA).