Jaitley appears for the Birlas 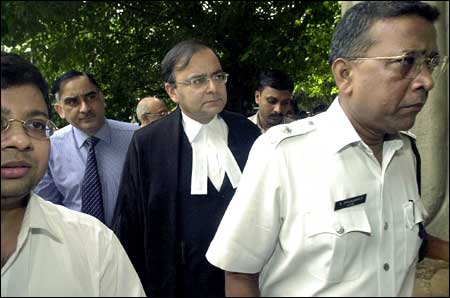 The Calcutta high court on Wednesday adjourned the hearing of the application on dismissal of four caveats by the Birlas in the Birla vs Lodha case, till September 1.

The application on the probate of the 1982 mutual will by M P Birla and Priyamvada Birla was adjourned till Monday.

Former Indian law minister Arun Jaitley (C) escorted by India police arrives at Calcutta high court to appear for the Birlas  in Kolkata on Wednesday. The case involves the disputed last will and testament of Priyamvada Birla in which she left Rs 5,000 crore of the family's wealth to her chartered accountant, Rajendra S Lodha. Photo: Deshakalyan Chowdhury/AFP/Getty Images