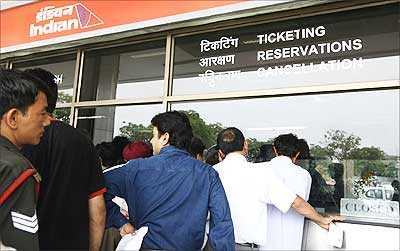 A strike by employees of state-owned carrier Indian on Wednesday created chaos in airports across the country, leaving hundreds stranded as flights were cancelled or delayed, even as the government initiated legal action against a union and warned of a lock-out if the stir was not lifted by Wednesday night.

The Indian management moved court in New Delhi and served a legal notice on the Air Corporation Employees Union (ACEU), which has a strength of over 12,000 and represents the airline's ground staff and cabin crew.

Official sources said the government would even consider a lock-out if the strike continued beyond Wednesday night, with Civil Aviation Minister Praful Patel saying that 23 staffers had been served suspension notices.

The employees began a flash strike late Tuesday night after walking out of negotiations with the management on key issues like career progression and parity with Air India staff once the two state-run carriers are merged in July.

"We will review the situation. If they do not withdraw their illegal strike by this evening, we will take stern action against them," Patel told reporters in New Delhi.

He warned that a proposed Rs 267-crore (Rs 2.67 billion) package to clear the arrears of Indian employees "can also be reconsidered" if the strike was not withdrawn.

About 40 per cent of the nationwide services of Indian were disrupted, including cancellation and delays of a large number of flights.

Indian cancelled at least 13 flights from Nedumbassery and Kozhikode in Kerala, Kolkata, Nagpur, Delhi and Chennai. Other flights were delayed by several hours, leaving hundreds stuck in airports.

Indian cancelled four flights from Kerala, causing hardship for passengers bound for various destinations, especially in the Gulf. The airline cancelled the Chennai-Coimbatore-Kochi-Sharjah flight, scheduled to leave from Nedumbassery airport, and three fligts from Kozhikode.

The Muscat-Kochi-Chennai flight arrived nearly two hours late and the Bahrain-Doha-Kozhikode-Kochi-Mumbai-Delhi flight was delayed by an hour.

In Thiruvananthapuram, authorities roped in private agencies after about 80 ground staff at the airport joined the strike.

Hundreds were stranded at the NSC Bose International Airport in Kolkata as no Indian planes took off. About 700 ground and technical staff struck work. Some striking employees staged protests outside the airport.

In Mumbai, Indian flights were delayed by at least an hour while the Mumbai-Nagpur-Mumbai flight was cancelled. There were also reports from Chennai of flights being delayed.

Five Indian flights from Delhi were cancelled and 10 others were delayed.

The Indian management last night declared the strike illegal. Indian Chairman and Managing Director Viswapathi Trivedi held talks with the striking workers at the airport in Delhi but no solution was arrived at.

ACEU general secretary J K Badola said, "We are open to talks. We are ready for a settlement. We are urging the management not to be adamant as we cannot put pressure on passengers. But we also have to find a solution to our problems."

The AITUC extended support to the strike by Indian employees, and its general secretary and MP Gurudas Dasgupta said: "The threat of the government to impose suspension will be met with opposition."

After protracted negotiations on wage revision, the ACEU and the Indian management entered into a settlement on May 22, which was referred to the civil aviation ministry for approval.

The ministry asked the airline's top management to continue negotiations, which were being carried out under the aegis of the Chief Labour Commissioner (Central).

Official sources said the CLC persuaded the ACEU to consider the payment of wage arrears with effect from January one, 2000, which was also agreed to by the management subject to government's approval.

On the career progression front, the ministry's prime concern was to ensure rationalisation between Indian and Air India in view of their impending merger, sources said.

The Indian management held meetings and discussed the career progression pattern sought by the union in tandem with the pattern existing in Air India.

The conciliation proceedings were continuing at the CLC office on Tuesday when the ACEU leadership insisted on the implementation of the original career progression pattern and walked out and later launched the flash strike, they said.

However, talks on the issue with Airlines Radio Officers and Flight Operations Officers Association are yet to begin. -- PTI

Passengers queue at a closed Indian counter at Indira Gandhi Airport in Delhi on Wednesday.