News
Business
Movies
Sports
Cricket
Get Ahead
Money Tips
Shopping
Sign in  |  Create a Rediffmail account
Rediff.com  » Business » Hyper-growth is over. What next for Indian IT firms? 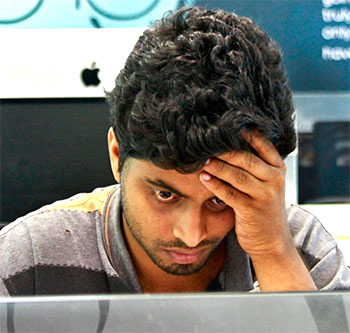 Elliott Capital’s letter to Cognizant, detailing how the latter can reinvent itself, has many lessons for its India-listed peers like TCS and Infosys, says Akash Prakash. 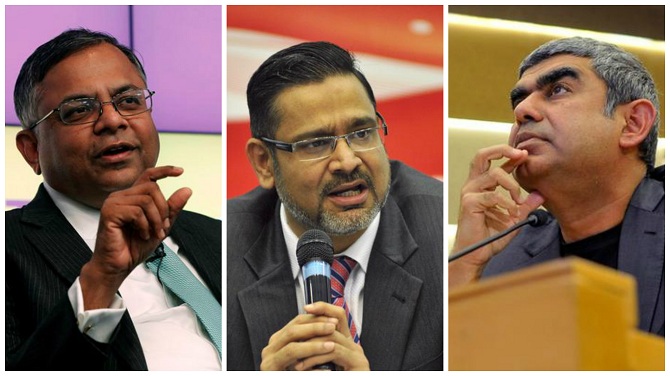 IMAGE: From left, TCS CEO N Chandrasekaran, Wipro CEO Abidali Neemuchwala, and Infosys CEO Vishal Sikka. Spoilt by 20 years of a 25 per cent revenue compound annual growth rate, the Indian IT players may not have made the shift to understanding what will drive their share price returns from here onwards. Photographs: Shailesh Andrade (left) and Abhishek N Chinnappa (center and right)/Reuters.

On November 28, Elliott Capital released a letter addressed to the board of Cognizant Technology Services (CTSH), outlining a set of proposals to increase the shareholder value.

CTSH, though listed in the United States and headquartered there, is a peer of Tata Consultancy Services and Infosys, with the vast majority of its delivery resources in India. It is for all practical purposes the second-largest Indian information technology (IT) services company. It has a superb track record of industry leading growth, with revenues rising 70x over the past 15 years to nearly $14 billion. It has also delivered huge shareholder value with market capitalisation rising by 43x over the same 15 years.

Elliott is an activist hedge fund, one of the largest with assets under management (AUM) of over $30 billion. It has taken a 4 per cent stake in CTSH, an investment of over $1.4 billion.

In the letter, Elliott lays out how CTSH can increase its share price by 50-70 per cent in just 12 months. It believes that Cognizant needs to lay out a formal capital-return strategy of both share buyback and dividend, combined with a willingness to increase margins. These steps, combined with changes in board composition and realignment of incentive structures, can drive a rerating of CTSH shares.

While CTSH may not be relevant for India-based investors, the letter is well-written, detailed and has many lessons for investors in India looking at IT services stocks.

First of all, even though Elliott makes it clear that CTSH is an industry leader with strong positions in old and new service lines, it builds in only a 9 per cent revenue growth rate for the company in its base case. Even in the bull case, this goes to 10 per cent. These numbers are arrived at in consultation with industry experts, consultancy firms, investment banks and detailed diligence. Clearly the days of 15-20 per cent revenue growth are now over for the industry. The industry and its major companies have all matured.

Their modelling shows that CTSH can increase its operating margin to 21.5 per cent, from 18 per cent today. This margin expansion is based on improving efficiency and benchmarking the CTSH delivery organisation, general overhead and sales and marketing spend to its Indian peers.

Given that TCS and Infosys are still delivering like-to-like margins of 26.6 per cent and 25.4 per cent, 400 to 500 basis points above the CTSH aspiration, one may question the sustainability of these margins. After detailed diligence, if Elliott feels that an optimised CTSH can only deliver margins of 21.5 per cent, can its Indian peers maintain such a margin superiority for a very similar gross margin structure and business mix?

If TCS and Infosys were to see margins decline, combined with 9-10 per cent revenue growth, this delivers only single-digit earnings growth.

I am not sure markets are prepared for this. It is possible that a rupee decline may bail out the Indian companies. 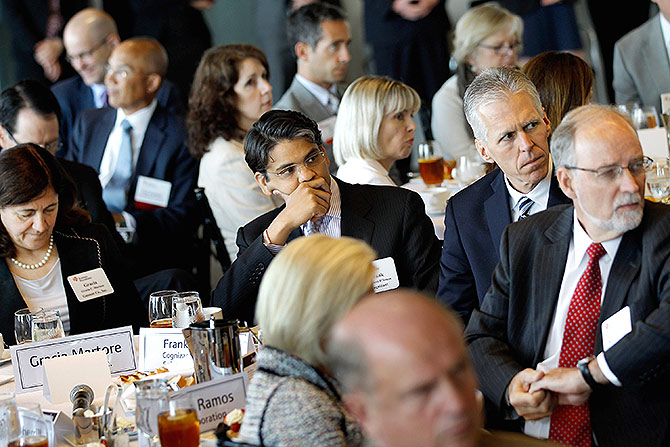 IMAGE: Cognizant President and CEO Francisco D'Souza (second from left) and about 100 other business executives at a business round-table in Washington, DC. Elliott Capital's letter lays out how Cognizant can increase its share price by 50-70 per cent in just 12 months. Photograph: Chip Somodevilla/Getty Images.

The Elliott letter also highlights the importance of capital allocation, especially as a company matures and ends its hyper-growth phase. The activist fund slams CTSH for not having a formal capital return policy. The company pays no dividend, and does only limited buyback, just enough to offset dilution from Esop (employee stock ownership plan) issuance.

Given the cash generative nature of IT services, CTSH generates over $2 billion of cash flow every year and is sitting on $4 billion of net cash, they have tremendous financial flexibility. Elliott has asked the company to immediately start a dividend, buy back $2.5 billion of stock in calendar year 2017 and commit to returning 75 per cent of the US free cash flow to shareholders every year.

The fund believes these steps will drive a rerating of Cognizant stock.

There is a lesson here for the Indian big boys as well. While they all pay a dividend and have payouts between 40-65 per cent of free cash flow, some are still squatting on large cash balances. Keep some cash for mergers and acquisitions, but return the balance to shareholders.

Spoilt by 20 years of a 25 per cent revenue compound annual growth rate, I am not sure the Indian IT players have made the mental shift to understanding what will drive their share price returns from here onwards. If you are going to grow revenues at only 10 per cent, you need smart capital allocation to deliver shareholder returns greater than revenue growth. This did not matter when you were growing revenues at 25-30 per cent and disrupting the incumbent IT stalwarts. It matters today when you are the incumbents and growth has dropped to 10 per cent.

Elliott also makes a point on the board and employee incentives. They point out that more than half the board has been there for nine years. There is need for fresh thinking, especially in an industry as dynamic as technology.

They also point out that incentives are almost entirely weighed towards revenue growth targets. Again, show me the incentives and I can predict the behaviour. This overwhelming focus on growth may have been appropriate when CTSH was a challenger trying to gain share, but not today when it has nearly $14 billion of revenue and is an industry leader. There is a need to align incentives in a more balanced way to include earnings growth and TSR targets in addition to revenue.

The Indian companies have better incentive alignment, but need to consider the Elliott comments on board composition. Do you have a board which is relevant for today’s IT services world? 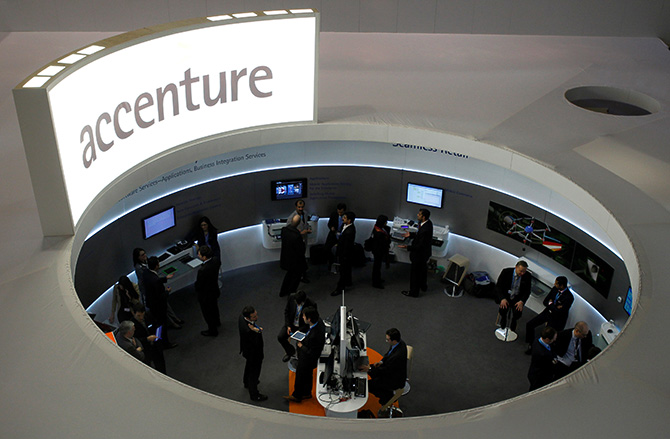 IMAGE: Elliott Capital uses Accenture as a role model. The company has reinvented itself as a leader in digital through smart acquisitions. Photograph: Albert Gea/Reuters.

Interestingly, Elliott uses Accenture as a role model. The company has reinvented itself as a leader in digital through smart acquisitions. Despite very muted revenue growth, Accenture’s stock has outperformed through margin expansion and capital returns (pays out 100 per cent of free cash flow). A company once thought of as a structural market share loser has found a way to adjust, catch the next wave of growth and adapt to changed circumstances. It has rebuilt investor confidence to such an extent that Accenture now trades at the highest multiple in IT services globally — 20 times earnings.

Indian IT services as an industry has ended its hyper-growth phase. It is unlikely to grow at 20 per cent in a sustained fashion again. When an industry matures, the major players have to relook at their business and financial strategy. Capital allocation, balance sheet optimisation, use of M&A, board composition and incentive alignment are all issues which may need to be re-examined.

Just like CTSH, its India-listed peers need to relook at some of these issues as well.