News
Business
Movies
Sports
Cricket
Get Ahead
Money Tips
Shopping
Sign in  |  Create a Rediffmail account
Rediff.com  » Business » Economy: Why Modi must be on guard

'The road ahead for the government's fiscal management will be full of many new challenges,' warns A K Bhattacharya. 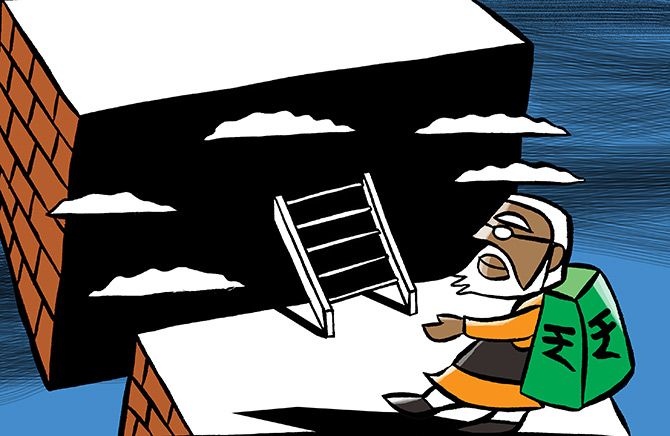 Provisional actuals of the Union government's revenue and expenditure in the first two months of the current financial year, released recently, lend greater clarity to the nature of the stress that government finances are likely to face in the coming months during 2020-2021.

Challenges will, of course, arise because of a significant widening of the fiscal deficit, compared to the Budget estimate of 3.5 per cent of gross domestic product made in February.

But the nature of the fiscal challenge can be better understood by studying the granular details in those provisional numbers.

They shed more light on the actual level of increase in borrowing, how the government has tried so far to finance the growing deficit, the areas of revenue flows that have been adversely affected and the specific areas of government expenditure which have been subjected to a squeeze. Five trends are worth noting.

One, in April-May 2020, the government's fiscal deficit or its total borrowing was estimated at Rs 4.66 trillion, which was almost 59 per cent of the annual Budget estimate of Rs 7.96 trillion.

Compared with the borrowing in the first two months of 2019-2020, the current year has seen a 27 per cent increase in borrowing.

There is, however, another way of looking at the slippage. Already, the government has raised its annual borrowing target to Rs 12 trillion from the Budget estimate of Rs 7.96 trillion.

So, as a proportion of the enhanced borrowing level, Rs 4.66 trillion of borrowing in the first two months of the year is just about 39 per cent.

This is not a hugely comforting number, but better than the 59 per cent figure calculated in comparison with the Budget estimate, which for all practical purposes has become irrelevant.

In the first two months of 2019-2020, the government's total borrowing or fiscal deficit was 52 per cent of the figure mentioned in the Budget estimate.

But compared with last year's actual deficit figure of Rs 9.35 trillion, the share of the deficit in the first two months came to 48 per cent.

In other words, the current year's borrowing so far does not show any significant deviation, when compared with the enhanced borrowing level already decided by the government. Indeed, it may provide some cushion in the coming months.

Two, a quick look at the sources of financing the deficit in the first two months of 2020-2021 shows a sharp increase in the government's reliance on external financing.

The increase in external financing is in addition to fresh borrowing of Rs 53,000 crore from the National Small Savings Fund, which was not budgeted earlier.

Three, the government's receipts during April-May 2020 have been hit on account of a decline in both tax and non-tax revenues.

Gross tax revenues in this period were estimated at Rs 1.26 trillion, a decline of 41 per cent over what was collected in the same period of 2019.

This was an obvious impact of COVID-19 and the lockdown imposed in this period, which significantly slowed economic activities across sectors.

Similarly, non-debt capital receipts, which largely include the government's revenues from disinvestment, have fallen by 73 per cent to Rs 831 crore.

With over Rs 2.1 trillion of revenues depending on divestment, a 73 per cent drop in non-debt capital receipts is a cause for concern.

Interestingly, however, the government's capital expenditure grew in this period by 16 per cent to Rs 55,206 crore.

Its revenue expenditure fell by 1.85 per cent to Rs 4.57 trillion, but the break-down of the decline reveals the government's changed focus in view of the pandemic.

For instance, its spending on the departments of agriculture, cooperation and farmers' welfare (largely for the PM Kisan scheme) shot up by 89 per cent to Rs 30,580 crore in April-May 2020 over the same period of 2019.

There is also a huge increase in the expenditure on road and highways --from Rs 328 crore last year to Rs 12,636 crore this year.

These increases also mean other departments, not connected with the welfare schemes needed during the COVID-19 pandemic, had to suffer a bigger decline in their spending.

Finally, the government's expenditure on major subsidies on food, fertiliser and petroleum products declined by 41 per cent to Rs 67,469 crore in the April-May months of 2020-2021. This was largely because of lower oil prices and the gains may well be temporary.

The road ahead for the government's fiscal management will be full of many new challenges. The trends in the first two months show that the government needs to be on its guard. 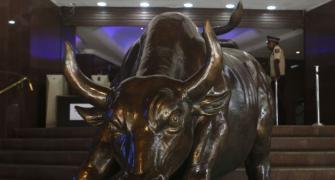