The Infosys saga shows how efforts to remote-control a company by its powerful promoter, even with good intentions, might hurt the entity, says Asish K Bhattacharyya. 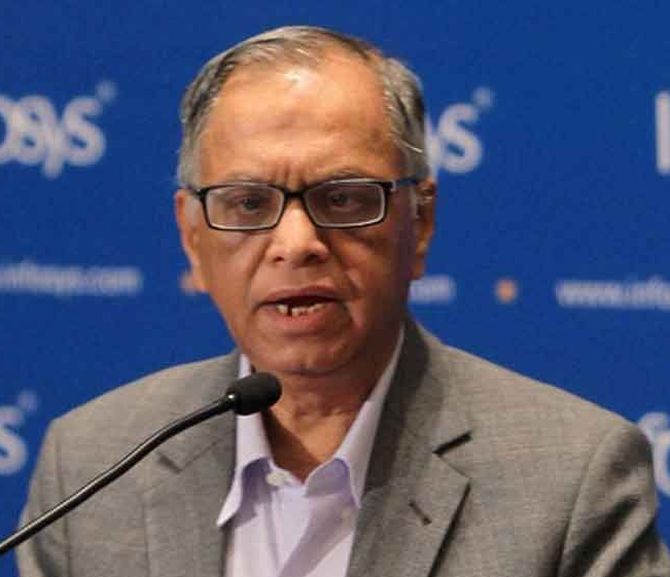 The resignation of Vishal Sikka as chief executive officer (CEO) of information technology giant Infosys will definitely slow down the process of much-needed transformation, and will hurt investors’ interest.

The Infosys saga shows how efforts to remote-control a company by its powerful promoter, even with good intentions, might hurt the entity.

In early 2017, an anonymous whistle-blower alleged lapses in governance at the company.

The most serious allegations were impropriety in acquisition of an Israeli company (Panaya) in 2015 and payment of ‘hush money’, in the form of high severance pay, to then chief financial officer (CFO) Rajiv Bansal, who was not in favour of the deal.

Narayana Murthy, the most eminent co-founder of the company, was unhappy about some decisions of the board, such as high severance pay to the outgoing CFO, high salaries to Sikka and Pravin Rao (COO), and high spending by Sikka.

The board appointed globally reputed law firm Gibson Dunn to investigate the allegation. The firm did not find evidence of ‘wrongdoing’.

The board published the summary of the investigation report. It also hired reputed law firm Cyril Amarchand Mangaldas to review corporate governance practices.

On severance pay to Bansal, in February 2017 the board publicly admitted that there was an “error of judgement”, it had “learned from the incident” and “there would be no more Rajiv Bansals”.

Murthy was not happy. He used the media to continuously attack the board for allegedly sliding corporate governance standards.

He said the board was dysfunctional and had failed to provide appropriate checks and balances. Some of his supporters believe Sikka was driving the board.

Murthy and his supporters might have inferred those from the fact that Sikka enjoyed a ‘free hand’ and the board’s support in his initiatives, and that he was not stopped from taking decisions that were against some of the past ‘good’ practices.

Although independent investigation found no impropriety, it is likely Murthy believes the Panaya deal was approved without proper due-diligence and that led to the conclusion that the board was dysfunctional.

Therefore, it is difficult to comprehend why a board constituted of highly successful business leaders and professionals would lack the commitment and motivation to lead the ‘transformational journey’ of a highly respected company.

Cohesiveness is essential in strategy implementation. Therefore, implementation of a new strategy often requires change in organisational culture and structure.

Companies change ‘ways of doing business’ to align these with new business models and changed contexts.

Good companies bring changes without compromising on ‘core values’, such as fairness to all stakeholders, integrity and transparency.

Every practice was considered good at some point in the life of a company should not be included in ‘core values’.

Such inclusion hinders desirable changes in ‘ways of doing business’.

For example, practicing of frugality should not be included in core values.

Murthy could be wrong in accusing the board that it undermined long established values and corporate governance standards only because the company deviated from some practices that were considered good in the past.

Murthy is genuinely concerned that corporate governance standards are sliding.

Perhaps he believes every practice that was considered good in the past should continue.

Another source of his concern is his faith in the principle of ‘compassionate capitalism’ and his belief that high CEO salary is against those principles.

It also appears he believes the whistle-blower’s allegations are true. It is possible his concerns were exacerbated by emotional attachment to Infosys. Murthy said in 2014 that Infosys was like his ‘middle child’.

The flashpoint of his attack on the board was his insistence on publishing the full investigation report on the whistle-blower’s allegations.

The board declined to oblige Murthy. The new board is yet to take a decision.

If the new board publishes the report and wrongdoing is revealed, the board has to take responsibility for damaging the company and Murthy’s position will be vindicated.

On the other hand, if the report is not published or does not provide evidence of any wrongdoing, Murthy has to take the blame for damaging the company.

The promoter should either participate in directing the company by joining the board or keep himself/herself detached from the company’s governance. Shareholder activism is desirable.

But, when a highly respected and powerful promoter speaks against the board or CEO publicly, the company tumbles into a crisis.

The writer is adjunct professor in the Institute of Management Technology (IMT) Ghaziabad; and Chairman of Riverside Management Academy; E-mail: asish.bhattacharyya@gmail.com