Her bones were broken, her dreams are not 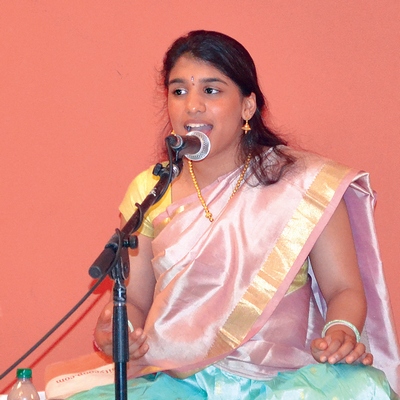 In the final part of a series on Presidential Scholars, Arthur J Pais profiles Maya Lakshmi Srinivasan who recovered from her shattered dreams of being a national gymnast.

Wind rushed through my hair, whisked past my ears," Maya Lakshmi Srinivasan thought four years ago.

"I flipped through the air, wishing these moments could last forever.

Nothing else mattered -- I did what I loved and I loved what I did. I was invincible."

The summer of 2009, just three years from the London Olympics, the teenager from Saratoga, California, was in the gym five hours a day, six days a week, training, she recalled in her Presidential Scholarship essay, 'until the excruciating pain from my torn calf muscles shot down into my heels, until my hands bled from bar routine after bar routine -- until every part of my body ached, begging me to go home. '

She was rushed into surgery. The doctors told her that with luck and months of rehabilitation, she might be able to return to the gym.

A piece of bone was separated from her foot, and yet for three months she trained rigorously.

'I almost had my skills back,' she said in an interview.

'I guess I didn't have a choice but to just forget that it was broken. If I kept thinking about it, then it would have just been worse. I would tape my ankle to make sure that it didn't roll in or anything, and then I would just go.'

After nine agonising months of watching and conditioning on the sidelines, and one month back at practice, her other ankle broke.

"The doctor bluntly gave me a choice: I could continue gymnastics and possibly lose the ability to walk, or I could 'choose' to end my gymnastics career and 'hopefully find another hobby' to pursue," she recalled.

'My world and dreams were as crushed as my ankle,' she wrote in her essay.

'One mistake had taken away a decade of training. I had failed to see my dream become a reality. Gymnastics was much, much more than a hobby -- it was my life, my purpose, my existence.

'How could I even begin to imagine a future in which gymnastics wasn't the sole purpose to wake up each day, in which the Olympics was not the ultimate happily ever after? To the world, I put on a facade of positivity, but inside I was broken.'

Maya had worked so hard that she had sacrificed a lot of her childhood fun and happiness for gymnastics, her mother Saradha Srinivasan, who had taken a special pride in her daughter's gymnastics skills and achievements, told a local newspaper.

Despite the second setback and the final realisation that she had to give up gymnastics, Maya slowly began to heal physically and emotionally.

"I think my training in classical Indian music played a big role in healing," Maya, who sings in the Carnatic style, added. "Our music carries some spiritual feeling."

Instead of giving up on her dream, she chose to redirect it. She says she found a passion for diving, a natural progression from gymnastics.

'Once again I was soaring through the air, feeling invincible as I once had in gymnastics,' she wrote in her essay.

'While gymnastics was everything to me, I realised that the end of gymnastics was not the end of my life, but the beginning of another journey; it didn't stop me from moving on, from feeling that excitement again, from succeeding.'

After having been home-schooled for two academic years, Maya returned to public school for eighth grade. But now she was focusing more on her studies, and with her grades flying high, she was able to compete and win a Presidential scholarship.

"I've learned to move on and make the best out of the bad things that happen," she said.

"To describe what I learned from that experience, I would use one word -- resilience.

"The past four years in high school have been eye-opening.

"What I thought to be a world of blacks and whites, I soon realised is actually a world of differing shades of gray.

"In other words, I've learned to find the silver lining in every raincloud.

"Regardless of the setback, the obstacle, the challenge, there is always a lesson to be learned in the fight to come back.

"Instead of brooding over the difficulty itself, I choose to internalise only what I must change in myself to avoid encountering the same problem again.

"Whether an issue is a result of my own mistake or that of something or someone out of my control, I've realised that the only way to make a situation positive is by making a change in myself.

"When I focus on the positive change I hope to see in myself, my mind, body, and energy goes entirely into seeking this change.

"This shift in focus from negative to positive allows me to clearly see the lesson to be learned, and to make the best out of any misfortune."

More from our Achievers section here

Part One of the series: This poet-playwright knows her words' worth

Part Three: This 'princess' strives to make a difference

Part Five: He wants to heal the world

Part Seven: Fighter for a world free of sexual assault

Part Eight: He is teaching a bankrupt city the value of money

Part Nine: Be it music or golf, she plays for a better tomorrow

Part Ten: He brings warmth and smiles... one quilt at a time

Part Twelve: Like Steve Jobs, a trip to India changed his life