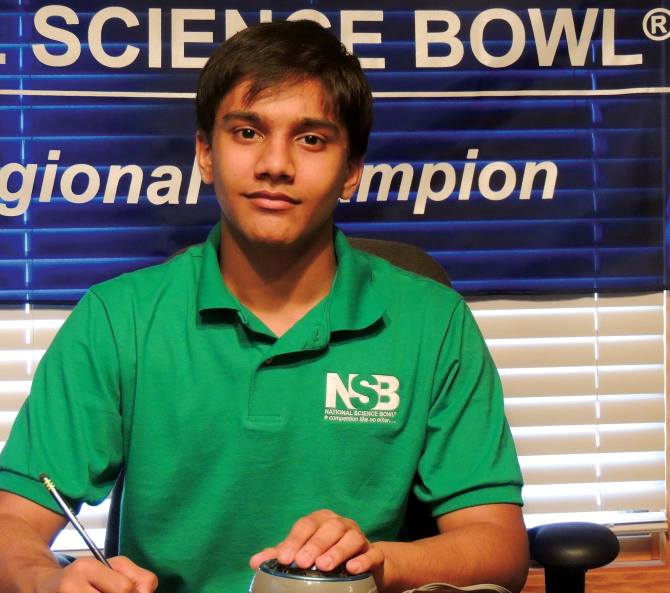 One of Akshay Rajagopal's prized possessions is an 18-page, poster-sized atlas for kids.

The Presidential Scholar from Lincoln, Nebraska, who as a boy had lived with his parents in several Asian countries, began learning the capitals of all the countries, discovering his joy for geography even before he became a teenager.

"In my early years, I experienced the wonders of a cultural melting pot," said Askhay, who is also a budding scientist. "As with most people, a passion for geography was not something that came naturally to my parents. But they developed a passion for it themselves so they could engage with me."

His mother soon became "somewhat of a geography whiz herself in the process of nurturing my passion."

This was before he found out about the National Geographic Bee.

"When we started preparing for the Bee, my mother became my geography mentor and was a major factor in my successes," Akshay said.

Akshay, who has won many competitions over the years, is going to study biomedical engineering at Stanford University.

'Though I play sports like tennis and cricket for leisure, I never did so competitively,' he wrote in the Presidential Scholarship essay. 'This wasn't a problem for me; at the schools I attended, there was no dearth of academic and extracurricular opportunities. Presented with such a wide variety of choices, I decided I would try to take advantage of as many as I could. I could be a leader where it counted, leading my schools to multiple state championships in Science Bowl. I also attended national tournaments in the National Forensic League and ARML. Being part of the Speech and Debate team allowed me to improve my speaking skills while keeping abreast of world developments -- a necessity for International Extemporaneous Speech. I have been fortunate to be a part of a community that values academic achievement and extracurricular involvement.'

He also discussed his work on a gene that has the potential to unlock the secrets to a possible cure of Parkinson's disease.

'I stumbled across this when I signed up for a summer research internship programme last year at the University of Nebraska Lincoln,' Akshay wrote. 'The main focus of the project was to determine how the DJ1C gene regulated the formation of chloroplasts in plants. My advisor told me one day how interestingly enough, the same gene appears in animals, where it seemed to play a role in Parkinson's disease.'

His ultimate goal is to create 'revolutionary medical solutions that are easily accessible and affordable throughout the world,' he wrote, 'as I firmly believe that effective medical treatments are not the prerogative of the privileged or the insured only.'

He has also discovered recently the satisfaction from tutoring students from his middle school. The Lux Middle School science bowl team has had an enviable record of winning the state science bowl competition. Last year, when he attended the National Science Bowl as part of the high school team, the emcee mentioned Lux as one of three schools that had sent their team to the nationals the most number of times. But that year, no one from Lux was there to hear this.

Akshay knew his middle school science bowl coach was busy with his PhD and would not be able to devote much time to the science bowl team. Akshay volunteered to be an assistant coach.

'I immersed myself into the task of coaching them in different subjects,' he wrote in the essay. 'While I have often volunteered to help my classmates when needed, this was the first time I was tutoring students from my former school. Nurturing young minds and seeing them blossom into a formidable team and to have contributed to it has certainly stirred a passion for teaching in me. Lux became state champions once again, filling me with an enormous sense of pride.'

He has also been taking economics classes, so he may study business; he hopes to open his own bioengineering company.

"My dad always says," Akshay said, chuckling, "the more you know, the luckier you get."