News
Business
Movies
Sports
Cricket
Get Ahead
Money Tips
Shopping
Sign in  |  Create a Rediffmail account
Rediff.com  » Getahead » The Girl Who Flew Across The World

'I've always wanted to be a pilot; setting records is the icing on the cake.' 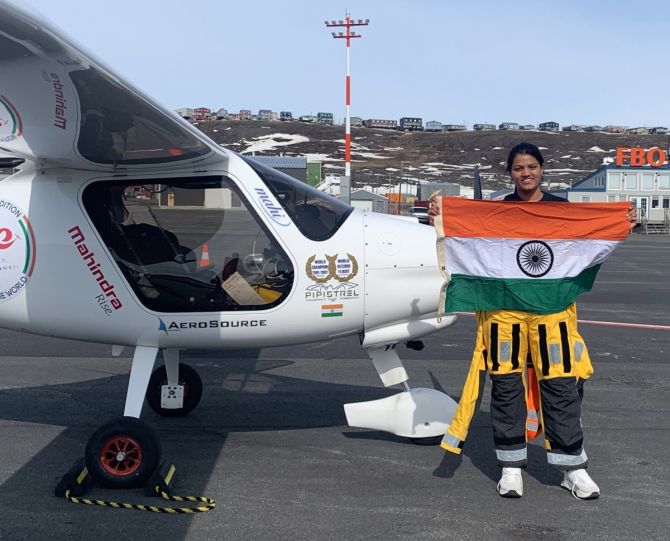 IMAGE: Aarohi Pandit at Iqaluit airport in Canada after she flew across the Atlantic Ocean. Photograph: Kind courtesy Wikimedia Commons

Not everyone, she says, gets the support and opportunity to achieve their dream.

She did. She wanted to fly and today, at the age of 26, holds four world records, including being the world's first woman -- and the world's youngest pilot -- to fly solo across both the Atlantic and Pacific Oceans in a light-sport aircraft.

She is proud of the fact that India has the largest number of women pilots in the world, she tells A Ganesh Nadar/Rediff.com.

Aarohi's achievements are chronicled in the inspirational series, Azadi Ki Amrit Kahaniyan. Presented by the government of India, it follows the lives of seven incredible women and currently airs on Netflix. 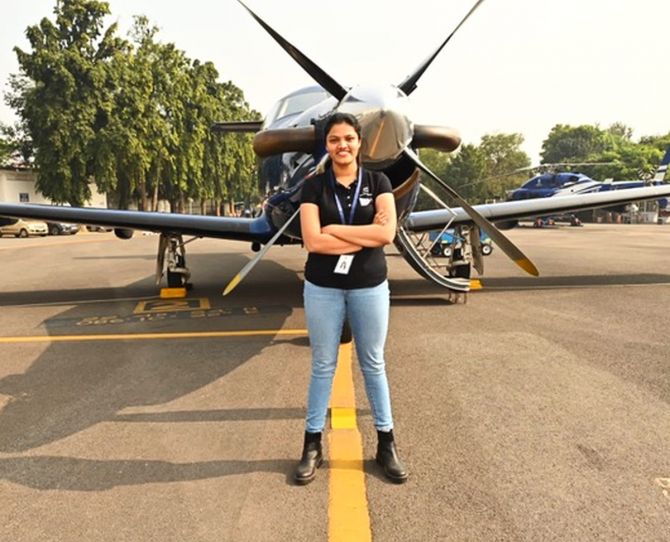 When did you realise flying was your first love and this is what you wanted to as a career?

My grandfather started taking me horseback riding when I was four years old. We were so regular that, after a few weeks, the horse owner would recognise me and let me jump the line to ride first.

I also participated in volleyball at the state level for my school.

I loved travelling by plane even then. As my father owns a travel company, I had the opportunity as an eight year old to fly in Air India's jumbo jet for the first time in 2004.

That's when I decided I wanted to become a pilot when I grew up.

Did you need to convince your parents? Learning to fly is expensive. What kind of financial investment do you need to become a pilot?

My parents and family, particularly my uncle, have always been supportive of whatever I wanted to do.

Learning to fly is indeed very expensive. Parents may end up exhausting their savings to support a child's flying career. But that was a risk my family accepted.

Earlier, commercial pilot training did not qualify for an educational loan.

Now, you can now apply for one to support your education. 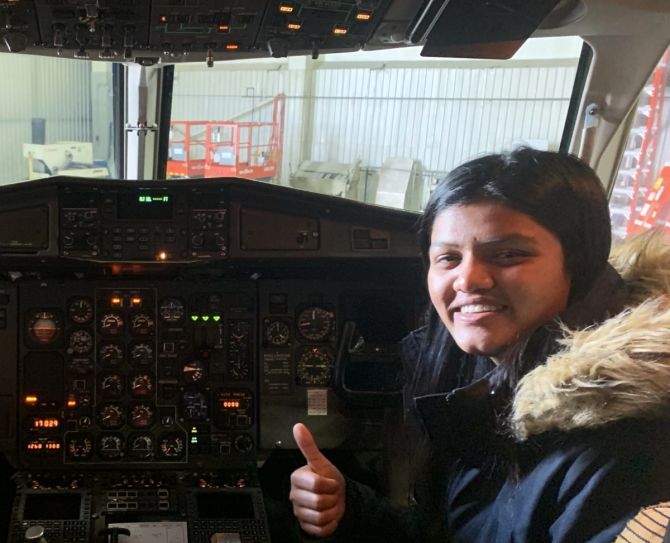 You were 17 when you enrolled at the Bombay Flying Club. Did you know how much effort would be involved on your part to become a qualified pilot? What were the challenges you faced?

A pilot's work requires a high level of proficiency.

You must be a good decision-maker, communicate effectively, be physically active and, most importantly, keep a cool head.

Flying at 30,000 feet presents numerous problems. Every flight puts your abilities and expertise to the test.

As a student pilot, I was completely unaware of all of this.

Initially, my flying sorties were flawed. But, as long as you are committed and persistent, you learn.

Your first big break came at the age of 21, when you were selected for the Women Empowerment Exhibition's around the world trip that you would fly on a light-sport aircraft. Can you tell us a bit more about this, especially the preparations and challenges involved?

I signed up for the WE! Expedition, a record-breaking all-woman round of the globe in a light sport aircraft, after I graduated.

It was a fantastic opportunity for my colleague, Captain Keithair Misquitta, and myself.

The training for this expedition was quite different from the training you undergo as a commercial pilot.

Flying for six to seven hours in a two-seater ultralight aircraft with an 80-hp engine is very different and more difficult than flying in the large jet aircrafts used by commercial airlines.

As the first woman to fly solo across the Atlantic Ocean, Pacific Ocean, the Greenland ice caps and cross-country across Canada in a light-sport aircraft, you have four world records to your credit. How did you prepare for them? What was your actual experience on these flights? Has your life changed after you achieved these records?

I had no knowledge about the world records before I started this mission.

I accepted the assignment because I enjoy flying.

I've always wanted to be a pilot; setting records is the icing on the cake.

I consider myself really fortunate to be doing something I enjoy and am also knowledgeable and skilled at.

You recreated JRD's first flight last year when COVID cases were still rampant. Can you share what that experience was like? What did you learn about JRD? What are the standout moments for you from that flight?

It was a dream come true to recreate JRD's flight. I had a great team to help me for this legendary tribute.

He flew the first Indian commercial flight from Karachi to Juhu in Mumbai on October 15, 1932.

My team -- the Indian Women Pilots' Association, the Tata Power Company and the WE Expedition -- and I got the amazing opportunity to re-enact (part of) his flight after 89 years.

As an aviator, I have always admired him; more importantly, I have admired his leadership abilities. He became my role model because of how he treated and appreciated others around him.

The flight took off from Bhuj airport (Gujarat) in honour of the women of Madhapur village, who played a crucial role in India's 1971 War victory (300 women rebuilt the damaged Bhuj airstrip in 30 days).

I used less than 60 litres of petrol during the journey, which lasted approximately five hours and covered a distance of 500 nautical miles.

The challenging aspect was staying below 5,000 feet above mean sea level at all times, just like JRD, without using GPS, autopilot or any computerised technology.

The finest part of the flight, for me, was the water salute and the waving of the National Flag when I landed at Juhu airport.

Receiving such a warm welcome in my hometown was an emotional experience.

Before each flight, how do you prepare personally and professionally?

I don't have a pre-flight motto.

I just make sure I'm hydrated and mentally prepared to start the engines.

When I'm in the captain's seat, I forget about my other issues and am ready to take off.

How does your family feel when you do a solo flight? Do they have any advice for you?

My family was really concerned about my first few trips. Then, they got used to it.

Now, I inform them about my whereabouts on our family WhatsApp group chat; their only advice is that I eat on time and sleep well (smiles).

Are you facing pressure to get married?

For the time being, marriage is not on my agenda.

Managing your professional and personal lives is critical, especially if your job is a demanding and time-consuming one.

Your family is very crucial in balancing your life; having the support of your family or in-laws is essential.

I believe a woman should marry when she is ready and not because of any kind of pressure exerted by anyone or by society in general. 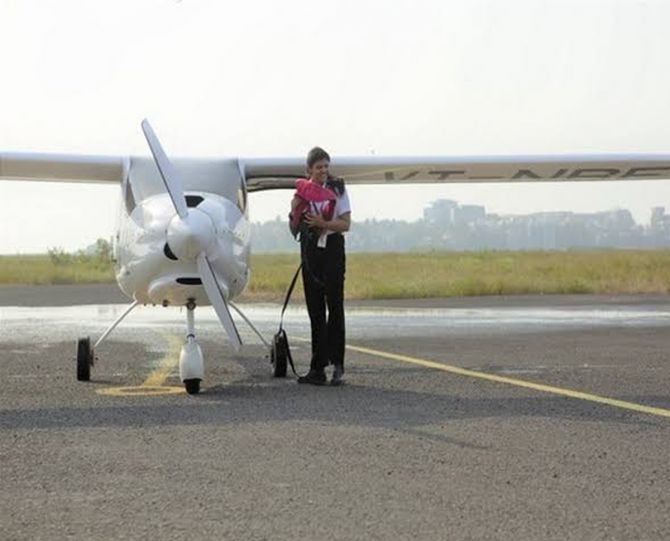 Can you tell us what you are doing currently?

I am a trained commercial pilot. At present, I have elected to work as an ultralight pilot with The Navy Blue Foundation.

As I explained earlier, there is a distinction between flying a commercial aircraft and flying an ultralight aircraft around the world. You have to train separately for that. I completed my training programme on the Pipistrel aircraft in Serbia and Italy.

Flying ultralight is more of an adventure. The risk involved is much higher than when you fly a commercial aircraft.

I was flying a single engine, low-powered, slow-moving aircraft. I was traversing high-altitude mountains and vast oceans with only a life raft and a limited amount of fuel on board.

Any flight can be your last, but that's the charm of it.

Of all your flights, which one has been the most memorable and why?

I've done various flights around the Arctic Circle, which is one of my favourite regions to fly in.

Since the climate in the northern hemisphere is so unpredictable, flying there is both difficult and scenic.

Can you share some of the dangerous, life-threatening or frightening moments you have faced while you were in the air?

Crossing the Atlantic Ocean was one of the hardest challenges.

The flight time was approximately six hours and the weather was extremely poor.

I didn't have many options due to the limited fuel on board, so I continued the flight at a fairly low altitude, dodging the terrible weather and navigating in dark clouds and rain at extremely cold altitude.

I was in a similar situation near the Pacific coast and had to land in extremely low visibility; it was about 200 metres, which is well below the ultralight minimum standards.

However, due to resource constraints, landing was unavoidable.

The Indian Women Pilots Association says India has the highest number of women pilots in the world. What do you think is the reason for this and what advice do have for young women who want to become pilots?

India holds the title for having the most female pilots in the country. This is something I am quite proud of.

The reason is the awareness in our country.

Many organisations, like the IWPA and the Ninety Nines: International Organisation Of Women Pilots, are reaching out to the community and conducting events in various institutions and schools to meet youngsters and create an environment in which everyone can be a part of aviation.

I am a member of these organisations and I enjoy meeting young kids and speaking to them about aviation.

What is the next record you are aiming for?

Currently, I am not aiming at any record (smiles).

By profession, I am a commercial pilot.

In a few months, you will meet me aboard one of India's commercial airlines.

You are an inspiration to many. Who are you inspired by and why?

I am inspired by several people.

I like imbibing the best qualities from everyone -- be it boxing legend Muhammad Ali, who fought valiantly to get his people justice, to Ratan Naval Tata, an industrialist and philanthropist with a positive mindset, a risk-taker and a man of values. I respect them.

My ambition is to be the finest of the best.

What is your message to the youth in India? What can they learn from your life?

I would advise them not to learn anything from my experience.

Everyone's journey is unique. And it's best not to bring a guidebook with you if you want to enjoy it.

The only thing I'd like to say is, 'Be consistent. Never give up, no matter what.' 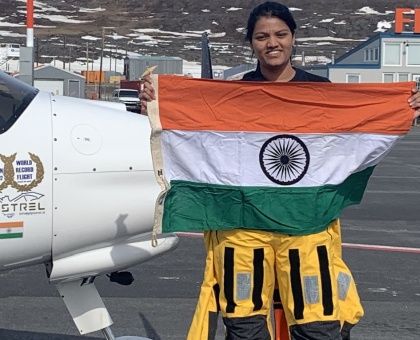 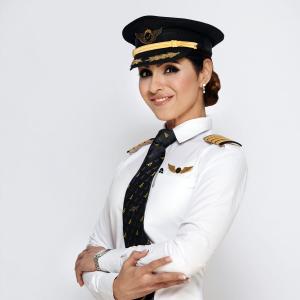