News
Business
Movies
Sports
Cricket
Get Ahead
Money Tips
Shopping
Sign in  |  Create a Rediffmail account
Rediff.com  » News » 'My dream is to fly the 747 one day'

Today: Captain Indu Nair, who joined a private airline after her tenure as a pilot in the Indian Air Force ended five years ago. From the second batch of women pilots in the IAF, she flew during the Kargil conflict. 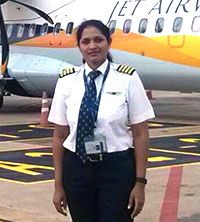 As a commercial airline pilot, one of her best experiences, she says, is taking off with an all woman crew! 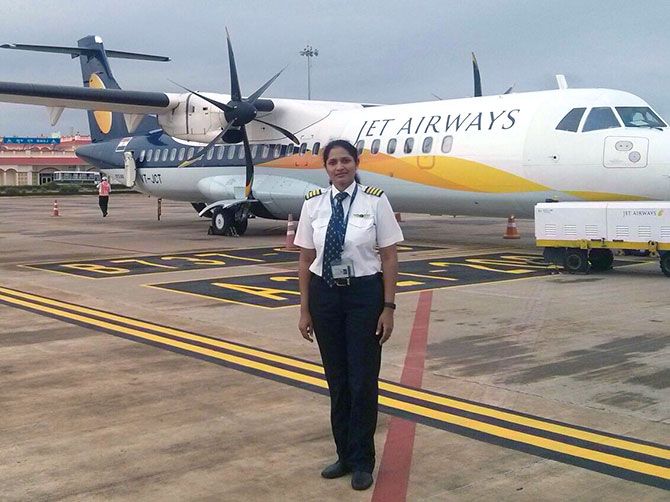 It is no longer unusual for passengers to have a lady pilot fly them to their destinations. I have been a pilot for 20 years and it has been a lovely journey. My dream, however, is to fly the Boeing 747!

India has many women pilots now. There are days when both the pilots in the cockpit and the cabin crew -- are all women. It is a superb feeling to have an all women crew.

I served the Indian Air Force as a pilot for 15 years and became a commercial pilot when my career ended since I was on a short service commission.

There was a time in school I wanted to be an air hostess, but my sister superior counseled me against it. I then started looking at the civil services but was always fascinated by the uniform and that's how I joined the IAF.

I was among the earliest batch of women officers. A male bastion till then, I think it took longer for the male officers to adapt to us that us to them.

At the time of the Kargil conflict, two of us women officers were called by our senior officer and told that while the male officers would fly for the Kargil operation, the two of us would be assigned ground duties.

We came out of his office and went back in again to tell him that we are trained pilots like the men and we can do the same. We were told that it would be hard, we would have to sleep in the airplane, use common toilets as the men and be in difficult terrain. We told him we were ready and we were giving flying duties during the Kargil conflict.

We flew in ammunition and supplies; on the way back we carried the bodies of our martyred soldiers.

Ferrying the bodies of young men who had died defending our country was one of the toughest things I have done.

It was tragic. It left me numb. 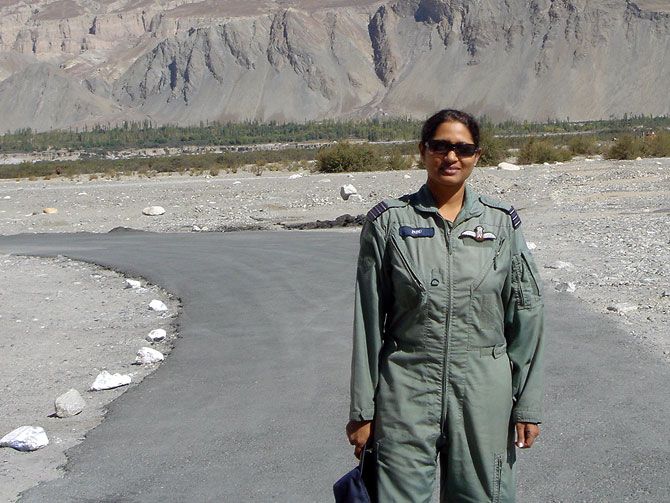 When I was in the Indian Air Force, I flew the AN-32 -- a rugged but forgiving Russian aircraft. You needed physical strength to operate the AN-32.

I now fly the ATR, a delicate machine.

Before a take-off, I take a walk about of the airplane and do the external checks. I often pat my aircraft and in my mind tell her to take us to our destination safely.

Safety is of paramount importance. As captain of the aircraft, I am responsible for the safety of the passengers and the aircraft.

I have seen sunrise and sunset, up in the sky, from the windows of my cockpit. I was telling my copilot just the other day how privileged we are to see nature in all its glory.

We have also seen how fickle nature can be, and how bad weather disrupts flying schedules. In all these years of flying, I have realised that a pilot has to respect the weather and follow the flying manual to a T.

I remember once on a flight, passengers got into an argument with the cabin crew when the flight was diverted because of poor visibility. They kept saying that if they can see the air strip from the window, why couldn't the pilot!

When we landed at the airport we were diverted to, the first officer and me as the captain, had to explain to the irate passengers that if the air traffic control tells us that we cannot land, we just cannot! 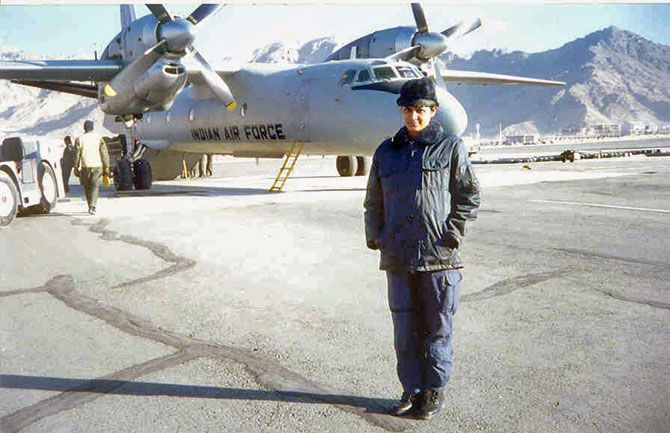 IMAGE: An AN-32, the Russian-made aircraft she flew in the IAF. Photograph: Kind courtesy, Indu Nair.

My usual schedule is 6 days of flying, followed by two days of rest.

I have to report at the dispatch room at the airport before the flight. We get written regulations; a medical and breath analyser test is done.

In the cockpit, I am in charge as the captain. The first officer and me discuss the flight, make the necessary announcements and steer the aircraft to the destination.

After a flight, we complete the necessary paperwork, go back to the dispatch room and then leave for home.

What I sometimes miss is having a regular 9 to 5 schedule, but such is the nature of my profession that this is not possible. 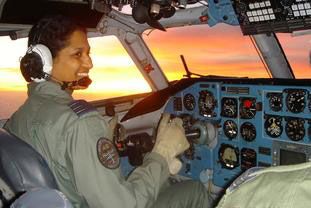 IMAGE: Her last sortie as a wing commander in the IAF. Photograph: Kind courtesy Indu Nair.

My children are used to seeing mummy as a pilot and my older child is showing some interest in following in my footsteps. Once I am home, I cook, spend time with the family and get early to bed. On my days off, I catch up on household affairs -- I like going and buying vegetables.

My husband laughs that I am better in the cockpit than in the driving seat of a car -- but driving on city roads is no longer a pleasant experience.

The thing that I don't enjoy too much about being away as a pilot is eating hotel food over days. How much airline and hotel food can you eat, after all!

So often, passengers on my regular routes have told me that once they hear I am in the cockpit, they know it would be smooth landing.

Women pilots are not an unusual sight and people, especially, girls look at us with pride.

More and more women every year are taking the commerical pilot's license. And over the year, women have proved to be efficient pilots. It is there for everyone to see.

Out of 5,100 pilots in India, 600 are women, according to the ministry of civil aviation.

A pilot with Jet Airways for the last five years, Captain Indu Nair will join another domestic airline next week. She lives in Mumbai with her husband, a former Indian Air Force officer, and two daughters.

She spoke to Archana Masih/Rediff.com