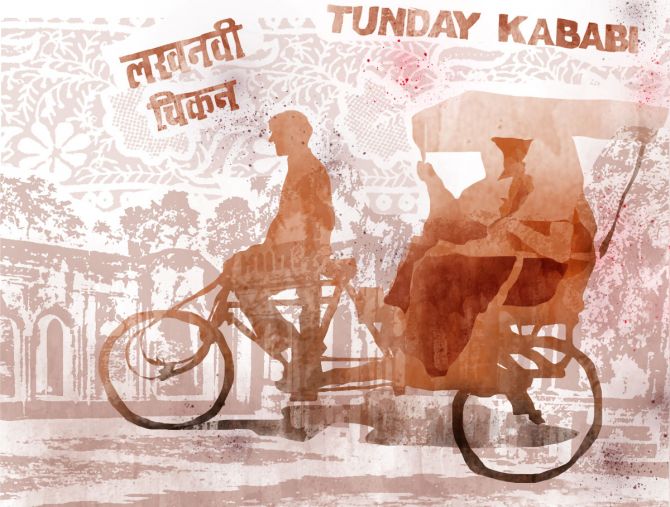 The Dominic Xavier family were fortunate enough to spend three lovely, whirlwind days and nights in Lucknow at Diwali and came away with a beautiful bunch of memories and impressions they would treasure.

The memories got built around several unforgettable forays into different parts of this gracious city.

A warm, sun-dappled morning was spent at the Residency on the Gomti river. Even if it was mostly in ruins, the elegance and grandeur, it once owned, came through more than 160 years later.

Called the Residency by the British conquerors, who took it over in 1856, this 40-acre little royal fiefdom was constructed by the nawabs of Awadh in 1774 and was the site of a 150-odd day siege during the First War of Independence in 1857 and eventually 2,000 Britishers lost their lives there.

Says Durga: "The Residency was very well maintained. I personally find ruins fascinating -- when you imagine what all happened there. And if you try to (conjure up) what (the place) would have been like at that time."

The wee palace, in the Residency, erected for the Vilayati Begum told mesmerising stories of its own. She was Mukhadara Aliya (Emma Hopkins Walters) and the British wife of Nawab Nasir-ud-din Haider, who taught him English. She is buried at the Residency.

Durga felt she could reconstruct what living there would have been like. When one went into certain chambers of the mahal, there was a palpable feeling that, "This would have been a room overlooking the lawn just for this lady."

A must on the itinerary was a trip to a crowded, mask-less (!) locality near Akbari Gate to sample the city's famous scrumptious Tunday kebabs. But that adventure, they discovered, amusingly -- quite like a crazy scene from The Thomas Crown Affair -- was a bit of a failure as there were shops named Tunday at every street corner and one could not pick out who was the original kebab artist! Eventually, a relative organised for the authentic kebabs to be brought home.

Top on Noah's list of the best experiences was tucking into the mithai. One cannot leave Lucknow without tasting its equally famous sweets.

The Class 9 student says: "I enjoyed the architecture (of Lucknow) and the sweets." He says he loved the Besan Laddus and the Kaju Katlis.

But for Durga the delicacy that she recalls to be the highlight of this brief holiday interlude was the opportunity to try out the matchless and wonderful-tasting Malai Makhan, that had to be procured before dawn and eaten while the sun was still coming up.

"This sweet you have to get before sunrise, because once the sun's rays reach it, the taste changes apparently. It's as light as a cloud. Basically, like whipped cream. It actually melts in your mouth."

"At Arjun's father's place (where they were staying) the table was lined with boxes of mithai all the time -- for breakfast, for lunch, for dinner!"

Witnessing a Lucknow Diwali turned out to be sweet occasion as well. "This was our first experience of a proper north Indian Diwali. Every house in Lucknow was lit up with those shaadi-wallah lights. Itna mithai khaya, itna mithai khaya (ate sooo many sweets). On Bhaidooj they put tikha for Dom and me too - that fascinating orange sindhoor."

Impressive too was the chance to view and run their hands over the rarest and finest masterpieces of chikan work done for saris and dupattas, some of it priced as high as Rs 100,000 plus, but worth every rupee, Durga says, for the 14 months of work that went into them.

"We saw the most, most beautiful chikankari work. Can't tell you how beautiful and intricate the work was. There was work as fine as one-thread embroidery."

The acclaimed 18th century Bara Imambara exceeded expectations for the family. An enormous mosque complex, with elegant 'Turkish' gates, it was built by some 22,000 labourers under the supervision of Nawab Asaf-ud-Daula.

"I loved the Imambara. There is a stepwell (bauli), there is a bhool bhulaiyaa (maze) and a mosque. I loved it, the arches... it's basically the sunlight and the shadows -- that's what I liked."

Dominic found that overall feel of the city grew on him -- "All the historic places, the crowd, food," especially the appetising home meals they polished off, offered to them, in true traditions of Lucknowi hospitality, by family and friends:

Maya, 19, who studies music production, too appreciated the beauty of both the Bara Imambara and the Residency. But what was most fun for all was discovering, for the first time, this charming state capital as a big family group, along with a band of cousins (some of them half-French), siblings, aunts and uncles.

On their return to Mumbai, the Dominics -- artists all -- put together sketch impressions of their visit to the City of Nawabs.

Please click on the images to relive the enchanting architectural beauty captured in their art. 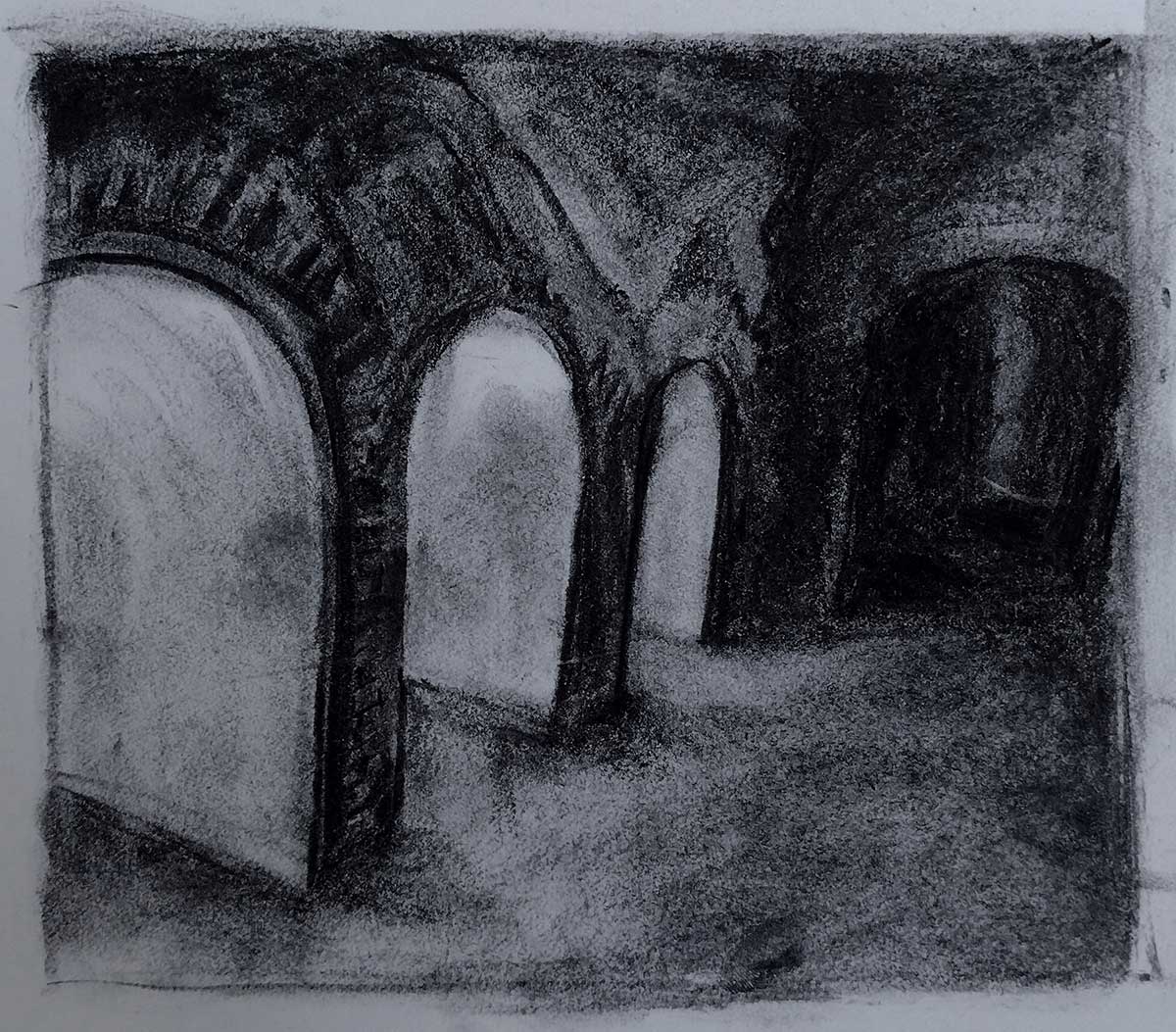 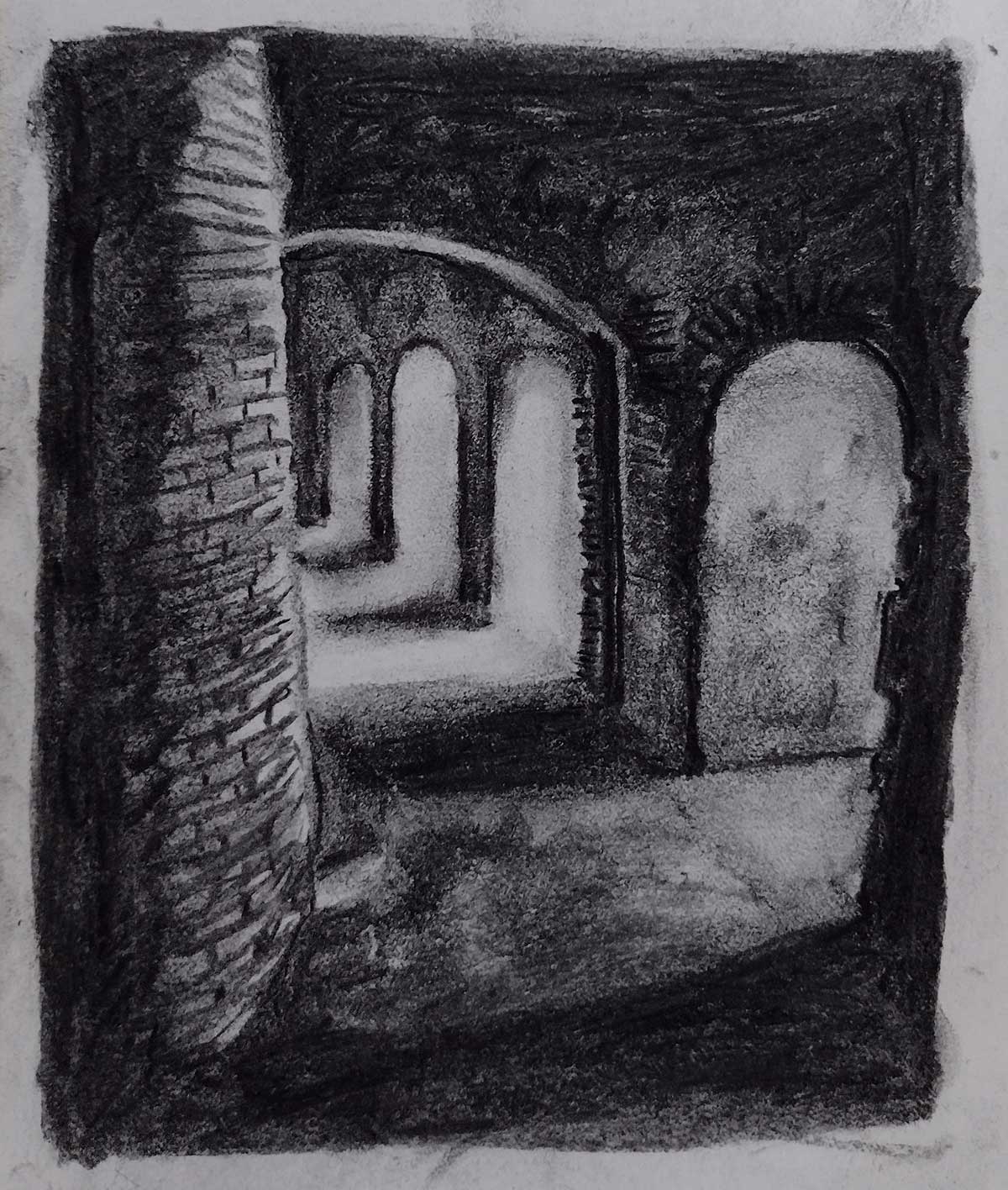 IMAGE: Capturing the play of shadow and light on the arches at the Shahi bauli or stepwell. Technique: Charcoal on paper.
Illustration: Durga Dominic 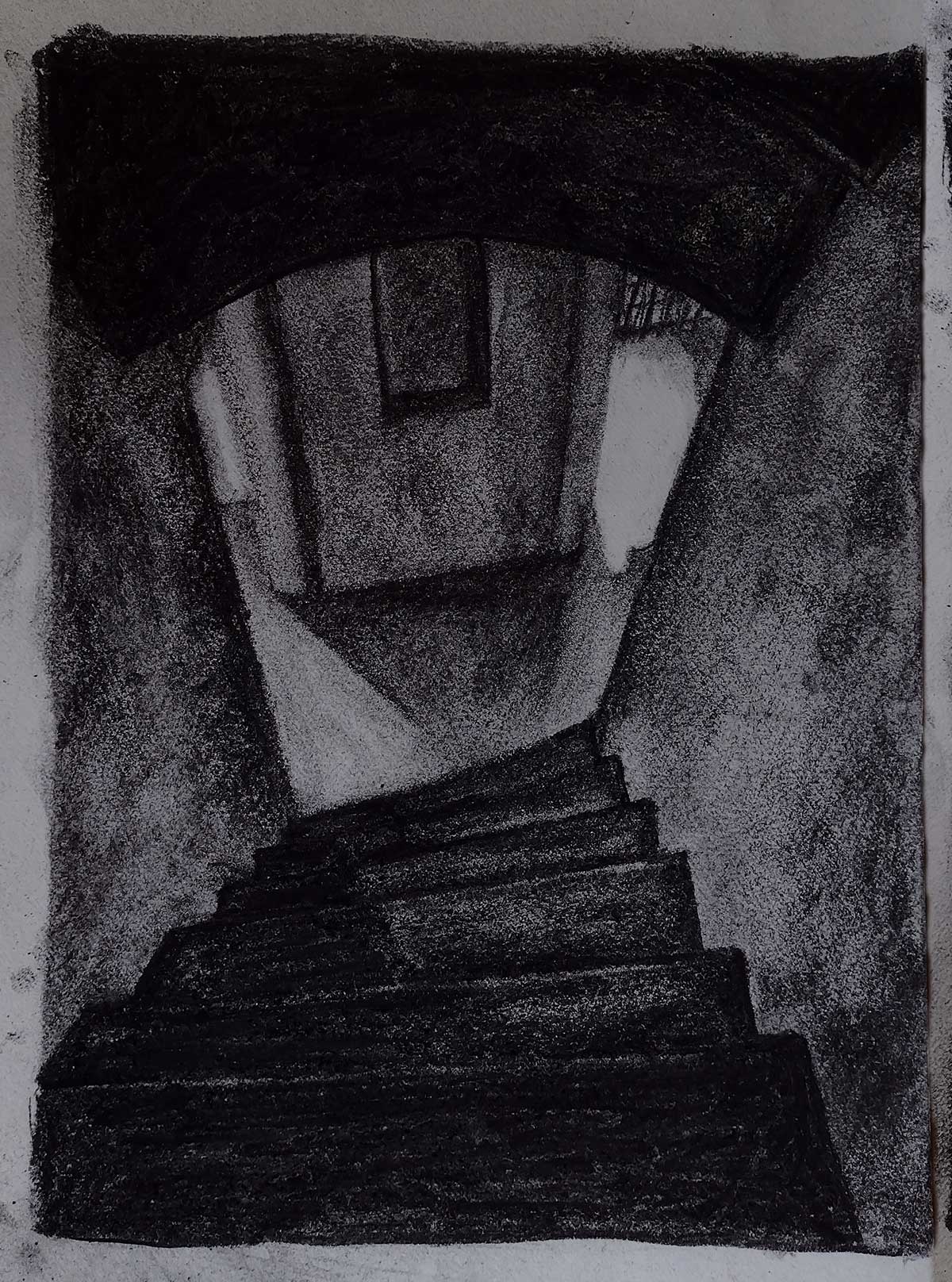 IMAGE: And on the steps at the Shahi bauli or stepwell. Technique: Charcoal on paper.
Illustration: Durga Dominic 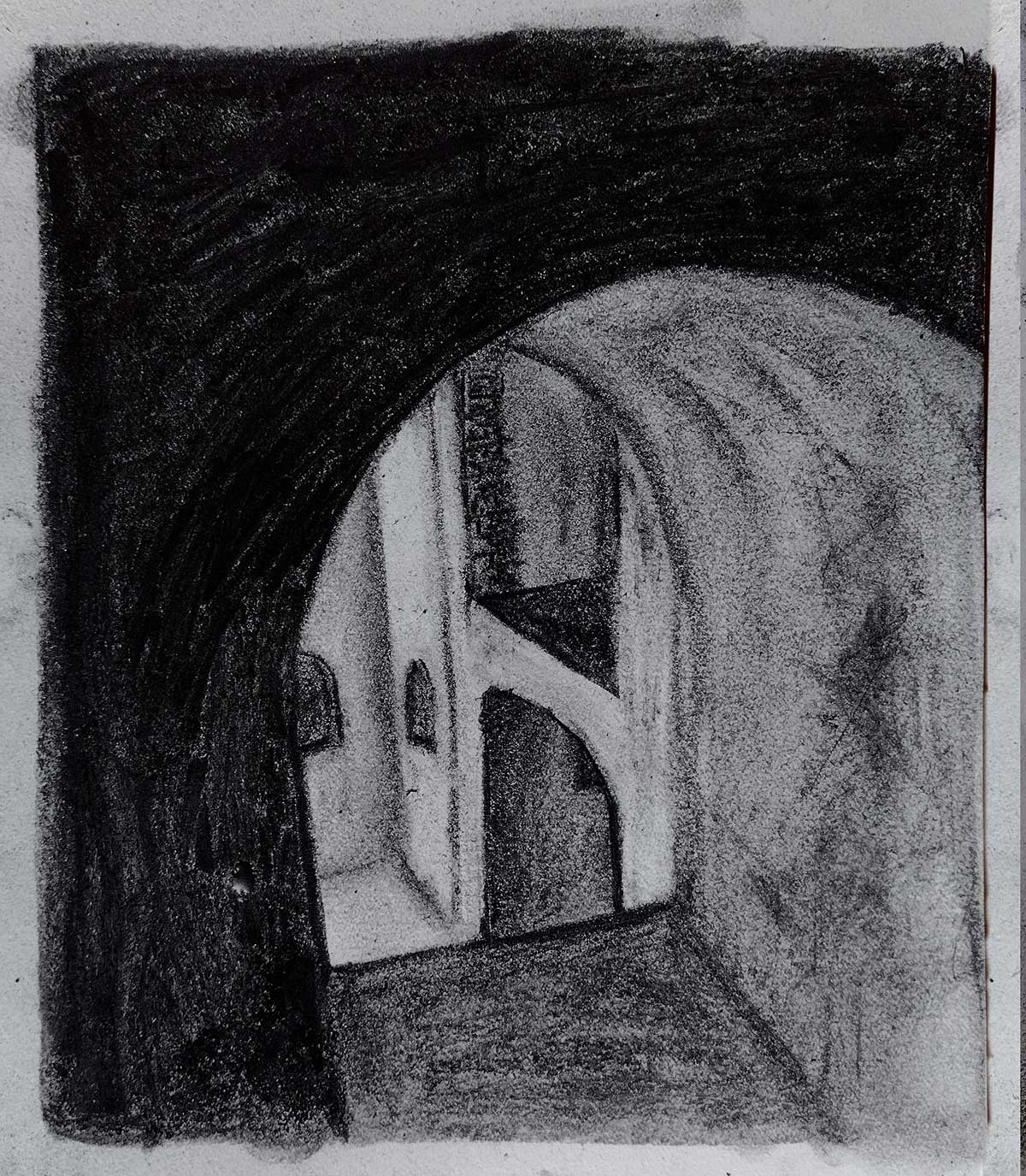 IMAGE: A chiaroscuro of the arches and the subterranean passageways at the Shahi bauli or stepwell. Technique: Charcoal on paper.
Illustration: Durga Dominic 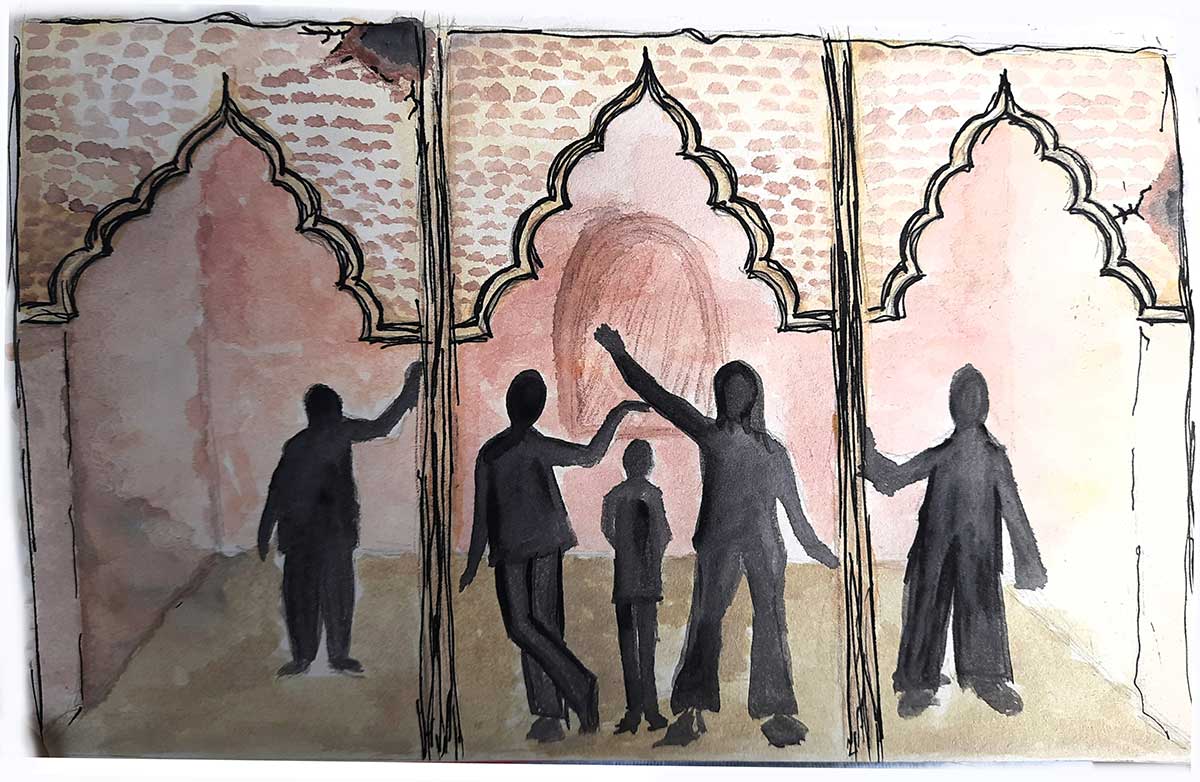 IMAGE: The arches and ruins of the mosque at The Residency with the family together in silhouette. Technique: Pencil and watercolours.
Illustration: Maya Dominic 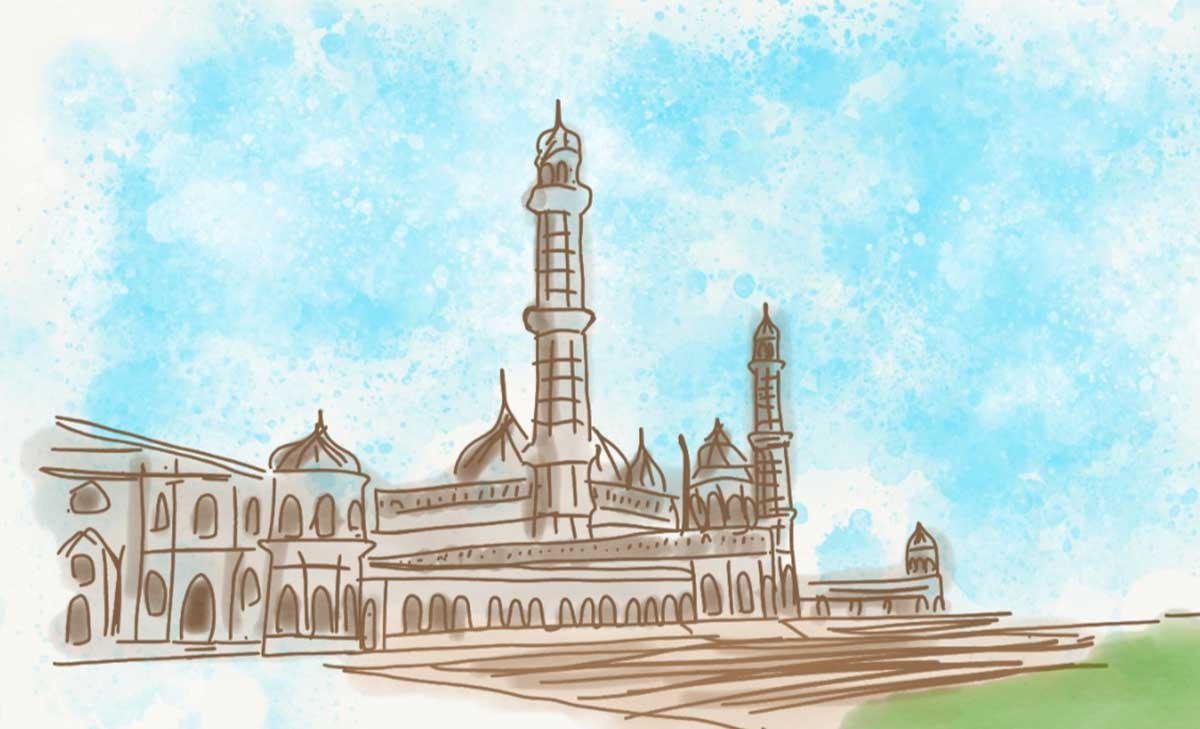 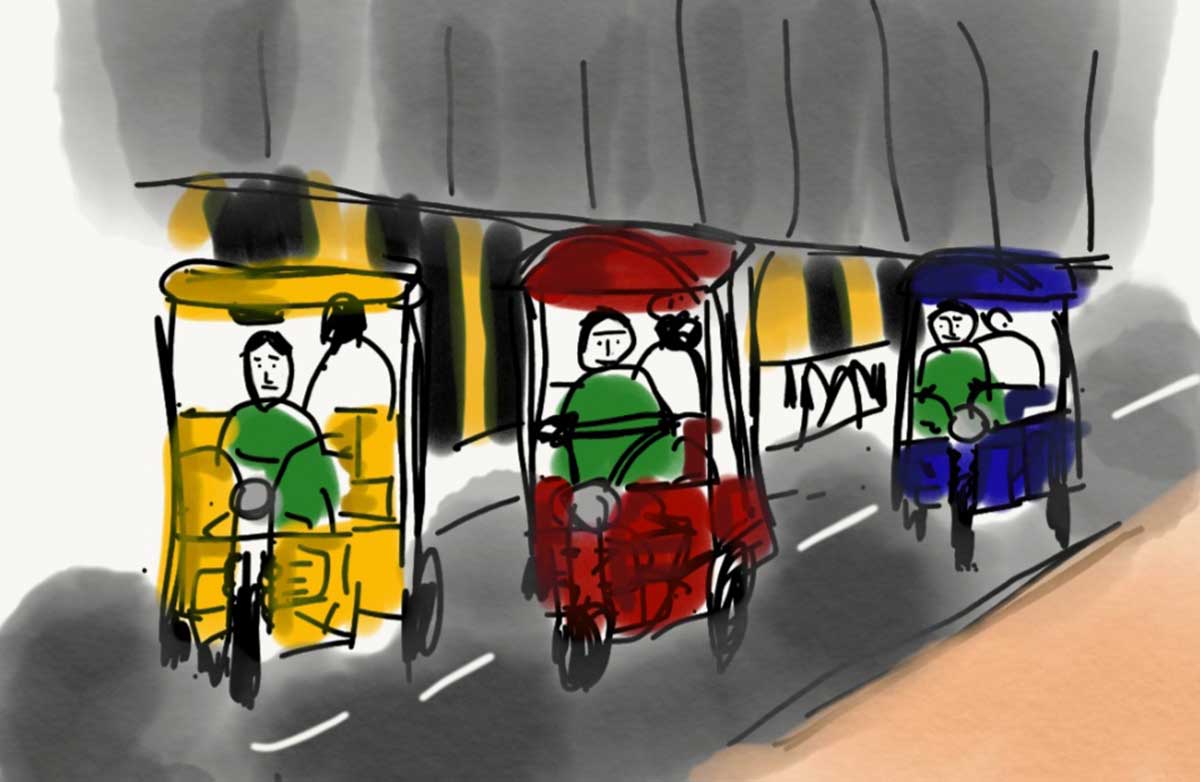 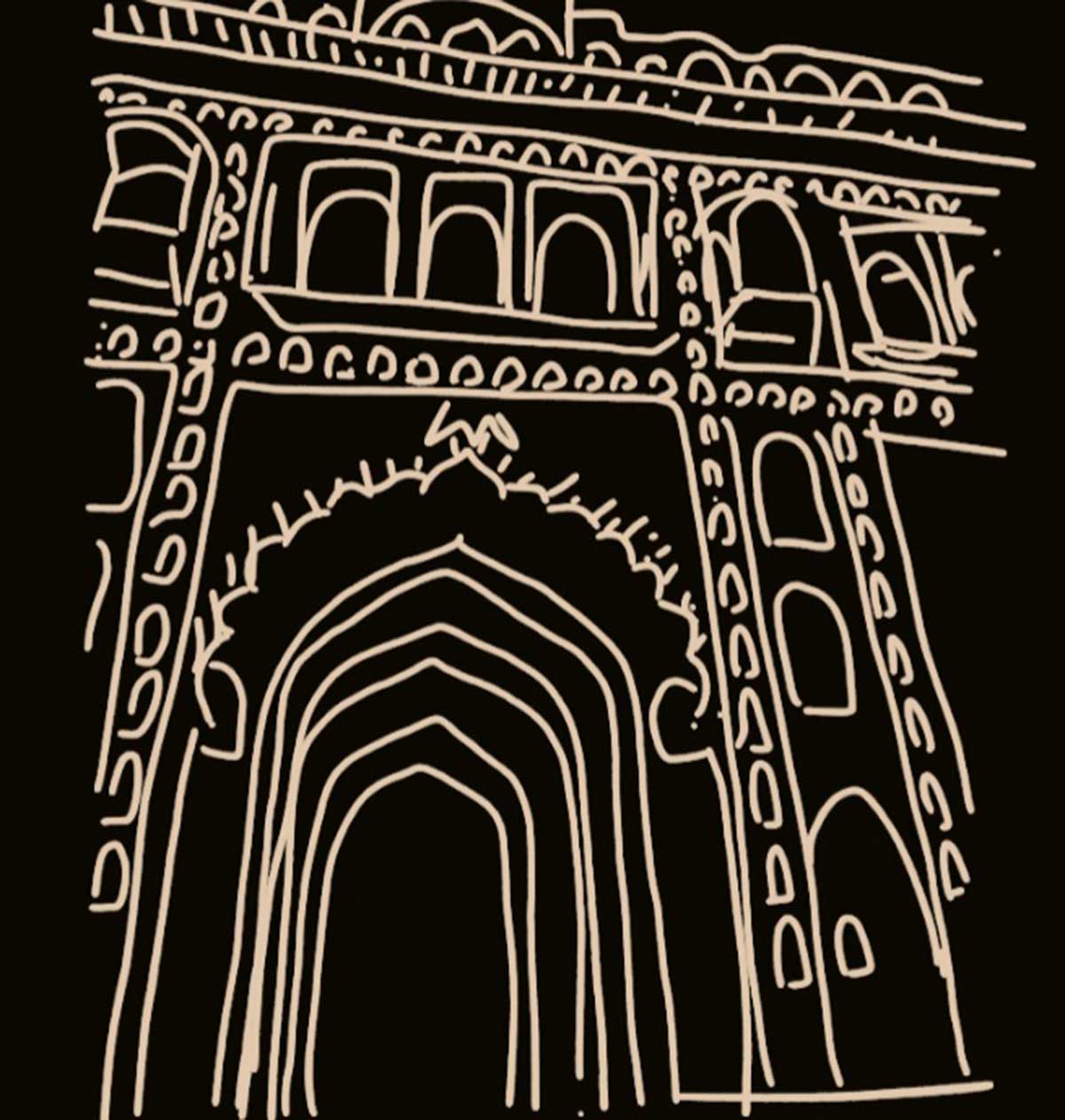 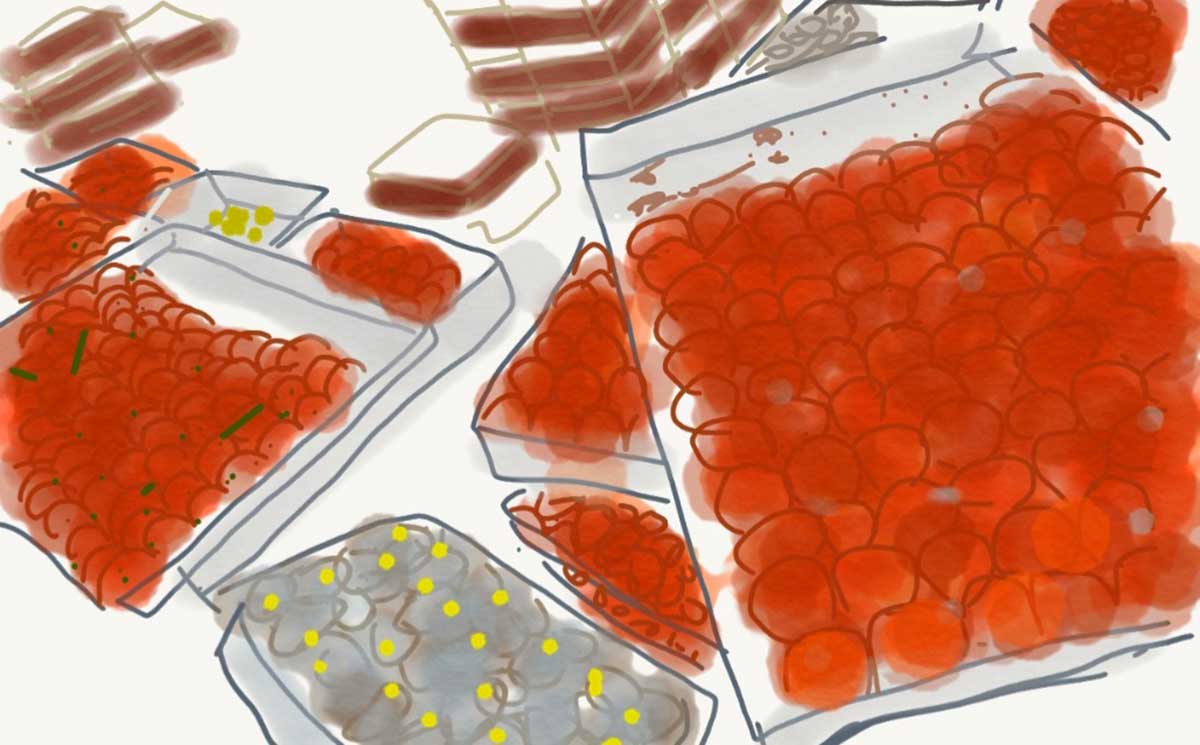 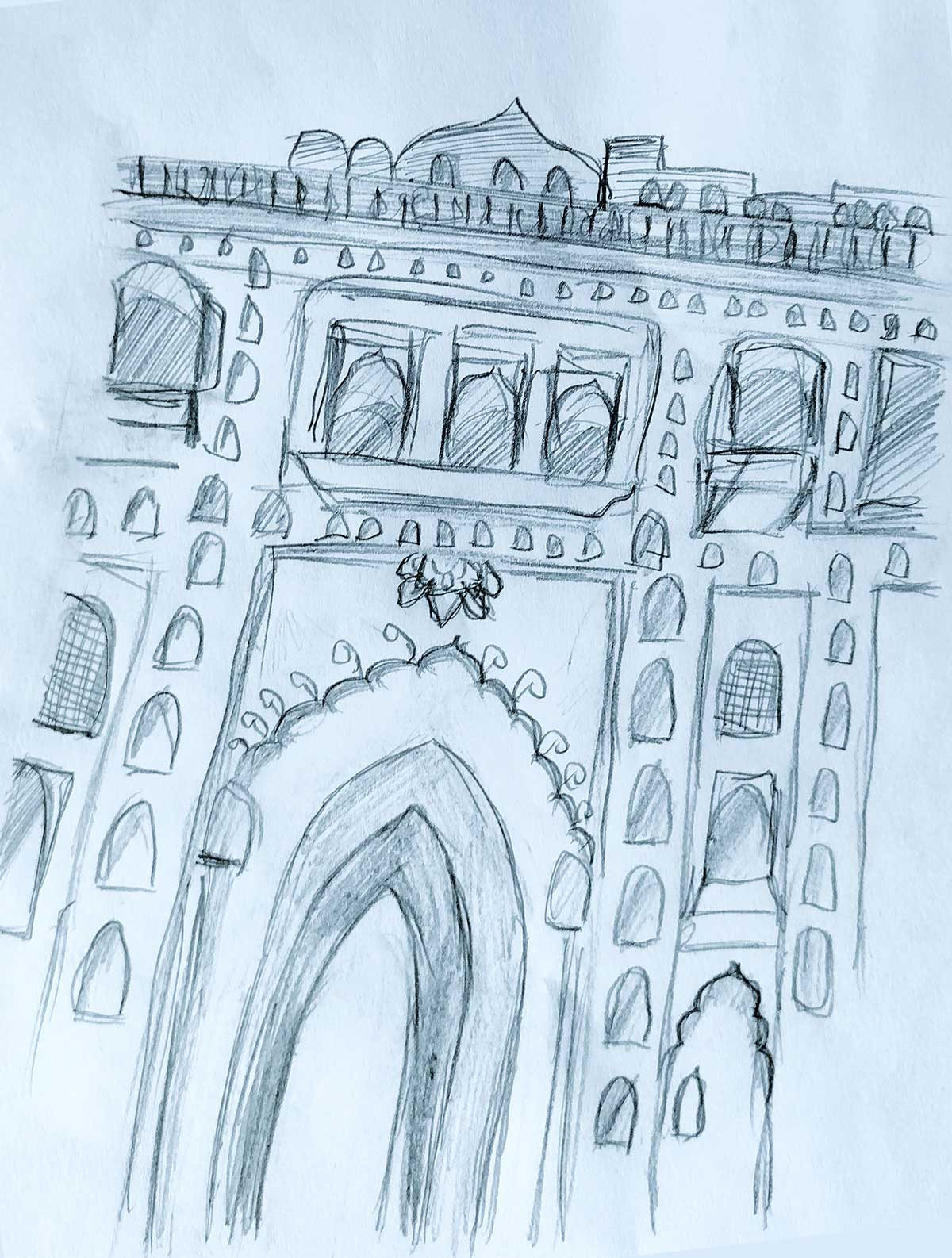 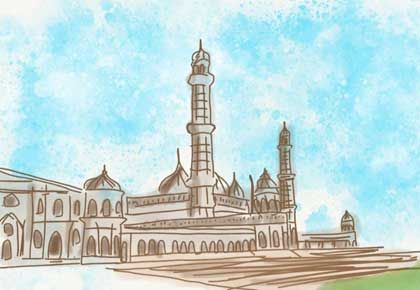 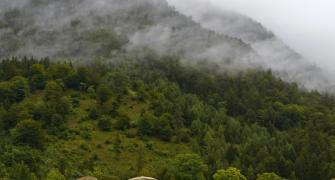 Have You Eaten A 32-Inch Parantha? 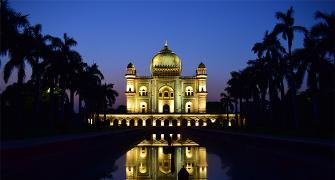 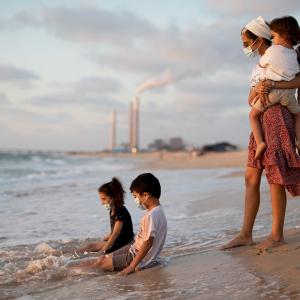 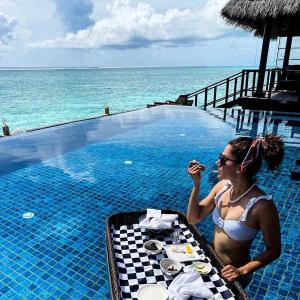 6 Travel Tips For The Perfect Holiday