Canada’s magnificent Cirque Du Soleil (literally, Circle Of The Sun) has had a long standing tradition – it always premieres its shows in Montreal.

But, for its 43rd original production, it has chosen to open in India, in Mumbai to be specific.

A huge Big Top (the tent where the performance takes place) -- it’s 62 feet high and has diameter of 135 feet -- will welcome 1,500 visitors for every performance.

The crew used the sea route to India, since they were accompanying 700 tons of equipment.

One of the largest theatrical producers in the world, Cirque Du Soleil’s grand productions are inspired by circus styles from around the globe.

It has a unique Indian touch; two Indian artists Rajesh Mudki and Kalpesh Jadhav will perform on the Mallakhamba as part of the show.

The Cirque Du Soleil website describes Bazzar as ‘an eclectic lab of infinite creativity where a joyful troupe of acrobats, dancers and musicians craft an awe-inspiring spectacle’.

Bazaar is a tribute to the origins of Cirque De Soleil, which was founded by two former street producers, Guy Laliberté and Gilles Ste-Croix, in 1984.

In Bazzar too, a maestro inspired to his followers to ‘invent a whimsical one-of-a-kind universe. In a place where the unexpected is expected, the colourful group reimagines, rebuilds and reinvents vibrant scenes in an artistic, acrobatic game of order and disorder.’

On November 14, Hitesh Harisinghani/Rediff.com (photographs) and Afsar Dayatar (video) had the opportunity to spend time backstage. These bright costumes, inspired by street performers would wear, were made in Montreal. An Indian assistants concentrates on the finishing touches to this colourful pair of shoes. Assistants stack accessories in readiness before the show. Rajesh Mudki and Kalpesh Jadhav, who will perform on the Mallakhamba, concentrate on their pre-show workout. A performer stretches before beginning rehearsals. Warming up before the final performance. Rehearsing in the Big Top. A glimpse of the Big Top.

Bazzar runs from November 15 to December 9 at the MMRDA Grounds in Bandra-Kurla Complex, Mumbai, and from December 25 to January 19 at Aerocity, New Delhi. 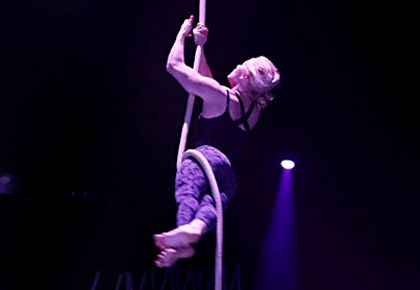 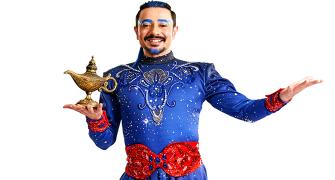 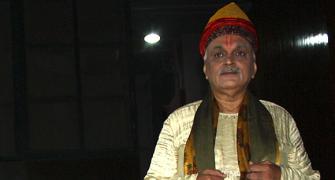