Sign in  |  Create a Rediffmail account
Rediff.com  » Movies » 'It is very difficult to do Shakespeare in Gujarati' 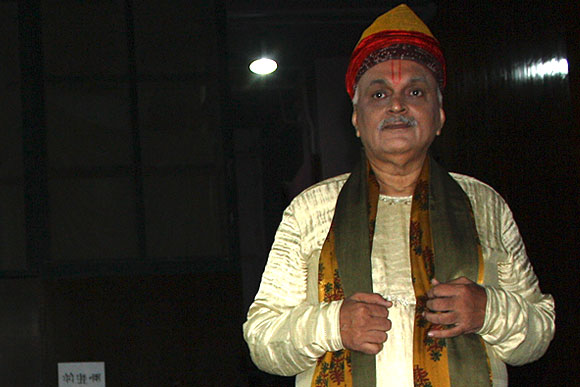 Shakespeare in Gujarati, to be performed at the Globe Theatre in London where most of the Bard's plays were staged some 400 years ago, is not a midsummer night's dream, but a fact.

Mumbai-based actor Utkarsh Mazumdar, who dreams and breathes theatre, will present Sau Saru Jenu Chevat Saru (All's Well That Ends Well) at the Globe as part of the Olympics festivities.

The play is produced by Arpana, the company co-founded by Mazumdar and the well-known theatre director, Sunil Shanbag, among others.

The Globe Theatre invited hundreds of theatre groups from all over the world to stage performances of Shakespeare's plays. Thirty-seven groups were finally selected, in 37 languages. Another Indian dramatic group will stage a play in Hindi.

Mihir Bhuta has adapted the play in Gujarati. Shanbag has directed the play while Uday Mazumdar has composed the music.

The songs, dances, dialogues, acting and mood is in the tradition of the popular Gujarati theatre of the early and mid-20th century called Bhangwadi theatre.

Utkarsh Mazumdar shares his delight with Rediff.com's Sheela Bhatt at performing Shakespeare in the theatre where the great dramatist's plays were first staged.

'Playing Shakespeare is a pleasure in itself' 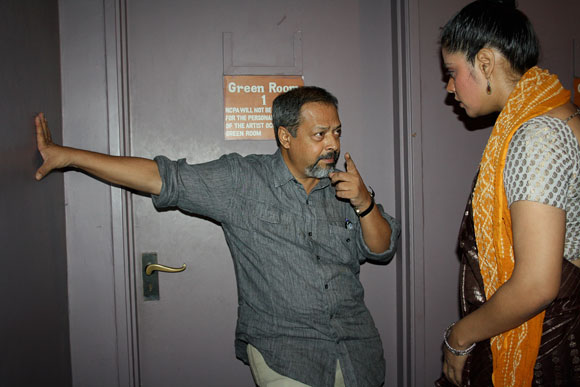 We were thrilled when we got selected last year to perform Shakespeare at the Globe Theatre.

We were given All's Well That Ends Well. A Hindi group was given Twelfth Night. The Hindi play is directed by Atul Kumar.

Our musical will play on the afternoon of May 23 and the evening of May 24. In our team of 14 there are three musicians who will play live.

We started rehearsals six months ago. We took the assignment seriously and selected people who could give us enough time.

I could convince () Archan Trivedi to leave his job and steady income of Rs 32,000 a month to join us.

He has just recovered from three types of cancer. For a sensitive actor like him, playing Shakespeare at the Globe was too attractive a proposition to let go. He plays the sutradhar (narrator) and has a comic role.

'Most of Shakespeare's plays are not viable on the Gujarati stage' 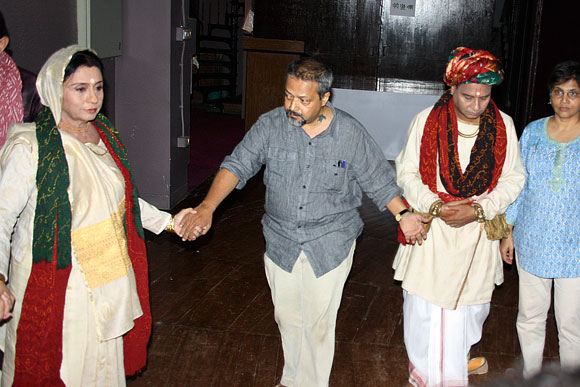 Playing Shakespeare is a pleasure in itself, but when you play it at the Globe, it's exhilarating.

The world over, actors like to play Shakespeare because he was attached to a drama company too. He was writing while performing. He knew the needs of the stage.

I have done around 50 plays in English, Hindi, and Gujarati, but haven't done Shakespeare yet. It is very difficult to do Shakespeare in Gujarati. Most of Shakespeare's plays are not viable on the Gujarati stage.

The Gujarati stage is thriving, but it is the only language theatre where the producer has to advertise in English as well! In a city like Mumbai, many Gujaratis don't read Gujarati because they have studied in English medium schools, but they understand the spoken language.

'It's a heady feeling to perform at the Globe' 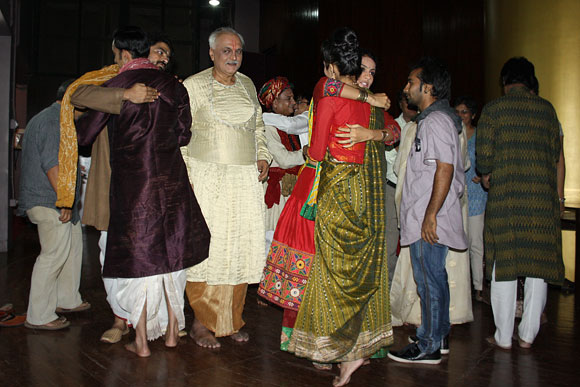 Image: Utkarsh Majumdar with other actors before the play
Photographs: Rajesh Karkera/Rediff.com

Sau Saru Jenu Chevat Saru is given the catchier title Maro Piyu Gayo Rangoon (My honey has gone to Rangoon) when we perform it in Mumbai.

The audience in Gujarati wants comedy and they largely come to the theatre to relax; they don't want to think while watching plays nor are they interested in supporting off-Broadway or off-off Broadway type of theatre which is so sought after in London.

I play the king of France in the play. In the Gujarati adaptation, I play a rich migrant Gujarati settled in Mumbai who has trading ties with China, Myanmar and other places.

It's a heady feeling to perform at the Globe. All the actors in the play have stopped taking assignments in television serials and in advertising. I have let go so much work just to ensure two shows of our play at the Globe.

Macbeth, Othello and Hamlet are my favourite Shakespeare plays, but personally I would like to play King Lear. It is the tragedy showing human weaknesses, foolishness and more.

'I don't want British critics to say, "This is not Shakespeare!"' 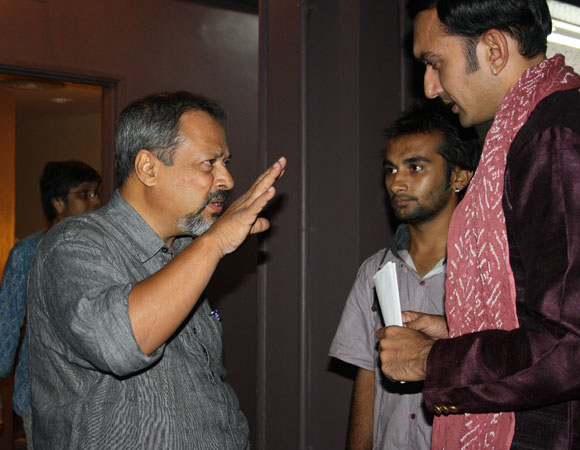 In my teenage years, my family used to go on vacation to Ahmedabad. My maternal uncle Bhalabhai Desai, a former government officer, had scripts of Shakespeare's major plays.

It was an amazing experience for us when uncle would play LP (Long Playing) records of Shakespeare's plays and we would read the script and match the audio with the text in our hand.

When I step into the Globe I will remember the recordings of those English plays.

Our Gujarati play will have sub-titles in English. I am sure non-Gujaratis will enjoy our musical too.

We have authentic costumes and great music by Uday Mazumdar. Sunil has interwoven the characters, Shakespeare's dramatic plot, and Gujarati family traditions and language very well.

I am bit tense because I don't want British critics to say, "This is not Shakespeare!"