News
Business
Movies
Sports
Cricket
Get Ahead
Money Tips
Shopping
Sign in  |  Create a Rediffmail account
Rediff.com  » Getahead » No more parties for me!

No more parties for me!

'Two hours to reach somebody's home seems a bit much for food you could just as easily order at home. Without having to talk to strangers. Or pretend to be having a good time. Or dreading a hangover,' sighs Kishore Singh.
Illustration: Uttam Ghosh/Rediff.com Breakfast is substantial: Two Tylenols, plus one more, and a Combiflam for added impact, along with some medicine for blood pressure. It's almost a filling meal, but the head still hurts.

Hangovers are the devil's own business, and he seems to have been particularly busy. The cranium feels like a mushy watermelon, only heavier. Somewhere, I know I have feet, but they don't feel connected to the rest of the body.

I think I ought to go back to sleep, but there's a woodpecker knocking fiercely on my forehead.

A shower hasn't helped. Nor has coffee. Or water.

I'm not going to any more parties either, especially when they're at the other end of the city.

Yes, I know, I'm lying again. But the traffic is insane.

Is everybody else going out too? It certainly seems that way from the top of a flyover when you spot cars gridlocked for what seems like miles.

Two hours to reach somebody's home seems a bit much for food you could just as easily order at home. Without having to talk to strangers. Or pretend to be having a good time. Or dreading a hangover.

Why do hosts insist on your having a third drink, and a fourth, and fifth?

Other perils include dressing up -- and, yes, it applies to men too. Do you have a fresh Diwali wardrobe? Repeating outfits is an offence punishable by excommunication from cards parties.

Not to be seen or heard at these shindigs is akin to social hara-kiri. Being dropped from party lists is a disgrace few can survive.

More friends suffer Diwali blues not so much because what they spend, or the bonuses they hand out to staff, as much as feeling left out because they weren't invited to three parties every evening, of which attendance at two is mandatory.

Every night for a month, then a lull before it's time for Christmas and New Year parties, poses another problem: Gifts.

Who gets the booze and who the recycled wine?

Should one scratch out the expiry date from eatables, or spa products -- because, as everyone knows, they aren't meant to be used as much as reprocessed till the packaging wears off and the products can finally be shared with the domestic staff.

If, sometimes, the packaging, or gift, looks familiar -- it might be because it's passed through your hands earlier.

Take care to not circulate repackaged gifts among the closest circle of friends because, chances are, you might be returning something to the very friends it originated from. Who might then hand it back to you on the next occasion.

And who plans the party menus? Because the food is always identical. You can predict to a certainty that is surprising only for its accuracy.

It seems like a single person has written out the list of what ought to be served, and is being followed diligently by everyone without interference.

It's enough to make you want to drink. A lot. But eat not so much. Resulting in that beastly thing that's happening to your head. A Tylenol may help. Or two, or three. 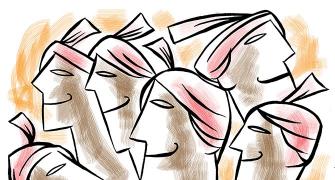 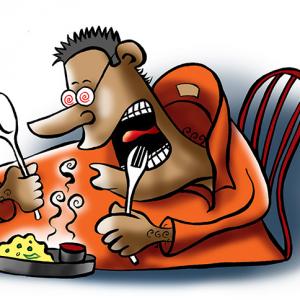 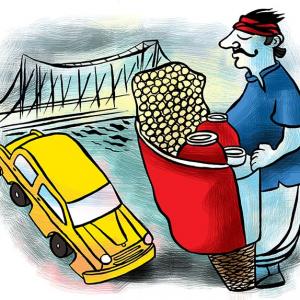