Srinivas Bhogle and Purnendu Maji reveal the Most Valuable Players of the India-Australia ODI series. IMAGE: Virat Kohli in the third ODI against Australia.

Steve Smith got to bat only twice, but still scored enough runs, at almost run a ball, to emerge as the most valuable player of the India-Australia ODI series (MVPI: 293).

Virat Kohli, the world's best ODI player, was second with a MVPI of 225.

The other top places were bagged by the usual suspects: Top order batsmen and wicket-taking bowlers. IMAGE: Rohit Sharma scored a century in the third ODI.

Rohit Sharma, in the form of his life, was below par although he produced that vital century India needed to bag the series after the shocking loss in the first game at Mumbai (MVPI: 186).

K L Rahul (MVPI: 200) was impressive, and his MVPI should rise even higher now that he is also the wicket-keeper. IMAGE: Steve Smith, the Most Valuable Player in the India-Australia series.

Most Valuable Players in the India-Australia ODI Series 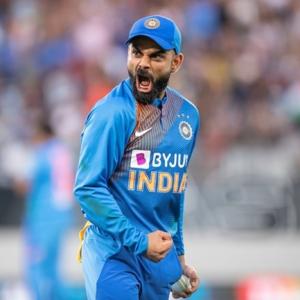