The IPL, which was perhaps the biggest gamble of his life, turned out to be the biggest success story ever, making Lalit Modi a cult in the echelons of global sport.
A fascinating excerpt from Boria Majumdar's Maverick Commissioner: The IPL-Lalit Modi Saga. 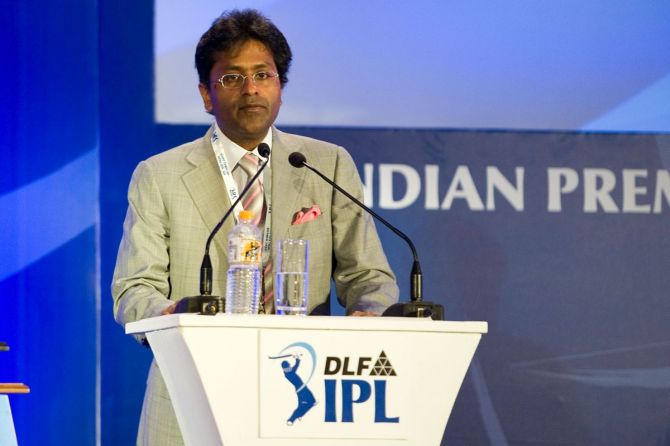 IMAGE: Lalit Modi, then chairman and commissioner of the Indian Premier League, at the IPL auction in Mumbai, January 19, 2010. Photograph: Ritam Banerjee/Getty Images

In his demeanour nothing much has changed, as of early 2022. He continues to live life king size in his luxurious apartment in central London surrounded by his own personal security who are all former marines with some of them trained in the art of armed combat. In every major cricket match he is visible. And each time he does so his photos go viral.

No ED or CBI has been able to pin him down and despite the BCCI doing all it can to push him away, he surfaces from time to time to take them on. While it is now close to 12 years that he has left India, he still follows every development in the IPL and Indian cricket.

Many claim that he is privately in touch with a host of powerful people and has many secrets with him. Some of these secrets are damning enough to cause an uproar back home and it is one of the reasons why nothing has happened to him. On his part, he has forever claimed that he is innocent and there is no proof of wrongdoing against him.

What exactly happened on the night when he left India?

Did he actually make a call to someone very influential in the BCCI that lasted for over an hour in which he spelt out his strategy going forward?

Was this call to a friend or to someone who he knew would never speak in public?

Why is it that details of this call remain unknown even after a decade?

What does Modi know that we will never know?

Why is it that the BCCI has never made this conversation public? While it is fair to say that the BCCI conducted an investigation against Modi that lasted for three years between 2010 to 2012 and subsequently imposed a life ban on him, questions will always remain as to why the BCCI did not stop Modi from taking some of the actions in the first place?

As the custodian of the game, was it not the duty of the BCCI to pre-empt wrongdoing and stop Modi on his tracks rather than take action in retrospect?

Was it that the BCCI and its mandarins were enjoying the success of the IPL and the billions that Lalit was bringing in and hence decided to turn a blind eye to things that were going on in Indian cricket?

Had the BCCI been more vigilant would things have drifted in the manner that they did?

How could Lalit Modi, who wasn't even the President, Secretary or Treasurer of the BCCI, become all powerful?

Between 2008-2010 it was as if Modi was way more powerful than even the BCCI President or Secretary and running a parallel Board. While the IPL is only a small part of the BCCI and a sub-committee, was it becoming big enough to overpower the mother institution itself?

Bluntly put, was Modi the Super Commissioner that many saw him as? IMAGE: Lalit Modi with Kevin Pietersen of the Royal Challengers Bangalore and Shane Warne of the Rajasthan Royals at the toss for the IPL T20 game at the Newlands Cricket Ground in Cape Town, South Africa, April 18, 2009. Photograph: Tom Shaw/Getty Images

In a career spanning a little more than 6 years in Indian cricket administration, Lalit Modi had changed the face of Indian cricket. By taking control of the Rajasthan Cricket Association in a manner that many would still consider unethical, he overpowered the Rungtas who had a stranglehold on the Association for a good two-and-a-half decades. And this is where the line starts to get blurred.

In the corridors of power, it is a very thin line between what's ethical and what's unethical. Power and control is equivalent to war and as the saying goes, all is fair in love and war. If Modi was unethical, can it be said that the Rungtas were always right in what they did? Could a family hold on to power for 25 years by doing everything by the book?

And once Modi was in control of Rajasthan, he tried to extend the ambit of his powers by forging a much bigger alliance that aimed to take control of Indian cricket from the clutches of Jagmohan Dalmiya.

In Sharad Pawar, Modi found someone who could be the face of the alliance. And once they had beaten Dalmiya, Modi had to demonstrate to the world that he was a better marketer of the sport than even Dalmiya who has forever been credited with commercialising global cricket. 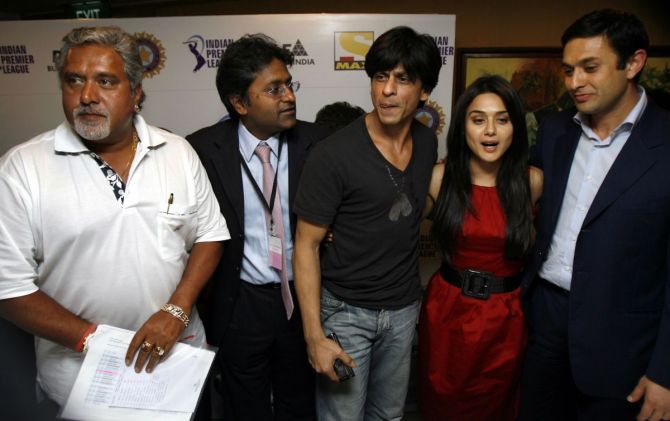 To take on the aura of Dalmiya, Modi needed the IPL. And for a start, all he had was a concept with very few takers. He had to individually reach out to friends and family and convince them to take the punt. He knew that he stood to lose it all if the punt ended in failure.

All he was selling was an idea and more often than not grand ideas end in failure. For Modi it was the IPL or nothing and he put all his eggs in that one basket.

From every account and every person who I have spoken to in the course of writing this book, it was the biggest gamble of his life. But with Modi a gamble was par for the course. Anything else would be unnatural.

He was born to take risks and more often than not would come out triumphant. The IPL, which was perhaps the biggest gamble of his life, turned out to be the biggest success story ever, making Lalit Modi a cult in the echelons of global sport.

And in creating the IPL, Modi ended up giving a new life to cricket in India and beyond. Cricketers found a new voice and marketers a new investment opportunity. Broadcasters found a magic product and the BCCI found its golden goose. While Modi had to give it all up in a few years and leave India for good, his imprint has stayed on making him one of the most talked about figures ever in Indian cricket administration.

So how did it all start and why did it end the way that it did?

How could Modi pull off the biggest cricketing heist of all time and then fall prey to the underbelly of fame in a matter of years?

What is his real legacy now that he remains in exile and chances are will never make a comeback to Indian cricket and the BCCI?

Can the IPL ever be a property that has no Lalit Modi claim on it?

Or is it always going to be the case that Lalit will be credited for creating Indian cricket's greatest money-spinner? While there aren't straight responses to many of these questions, it is important we deep dive and seek some of these answers. For in doing so, we end up discovering a man who was a genius as well as a maverick. His actions can't always be described in black and white and that's what adds to the aura of Lalit Modi. There are no straight answers. There are unsolved mysteries at key points in his life making him a fascinating subject of inquiry.

Is he the 'Infamous Architect' or the 'Super Commissioner'?

The jury will forever be out on this one.

Excerpted from Maverick Commissioner: The IPL-Lalit Modi Saga by Boria Majumdar with the kind permission of the publishers, Simon and Schuster India.

Lalit Modi in the midst of a Rs 10,000-cr family feud
'Modi tinkered with the rules at will' 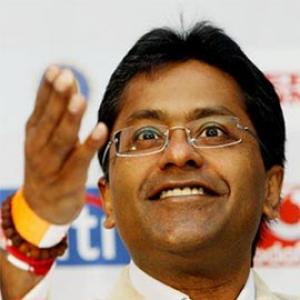 It's going to end by me getting a clean chit: Modi