Sign in  |  Create a Rediffmail account
Rediff.com  » Cricket » Exclusive! 'Can you imagine that the BCCI will have ANY credibility?'

Exclusive! 'Can you imagine that the BCCI will have ANY credibility?' 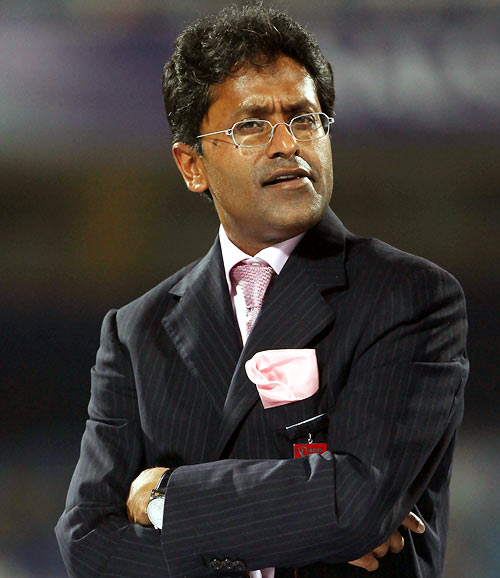 'Every element of this sorry saga is a complete and utter disgrace in which the politics of power is more important than the future of cricket,' Lalit Modi tells Rediff.com's Harish Kotian.

The arrest of three cricketers for allegedly being involved in the spot-fixing saga in the Indian Premier League is fresh in most Indian minds, but the Board of Control for Cricket in India appears unconcerned about cleaning up the mess.

BCCI President N Srinivasan was under immense pressure to resign following his son-in-law Gurunath Meiyappan's arrest for alleged involvement in the IPL scandal.

Instead, Srinivasan agreed only to step aside till the inquiry into the episode is completed, handing over the reins to Jagmohan Dalmiya who was named head of a four-member 'interim arrangement' to run the Board.

Former IPL chief Lalit Modi, who is based in London, believes the controversy is making India a laughing stock in the cricketing world.

Dalmiya's appointment, Modi says, was orchestrated by BCCI Vice-President Arun Jaitley, who is also a Bharatiya Janata Party MP and Leader of the Opposition in the Rajya Sabha.

In an e-mail interview with Rediff.com's Harish Kotian, Modi typically pulled no punches on the developments.

'Srinivasan is still calling the shots' 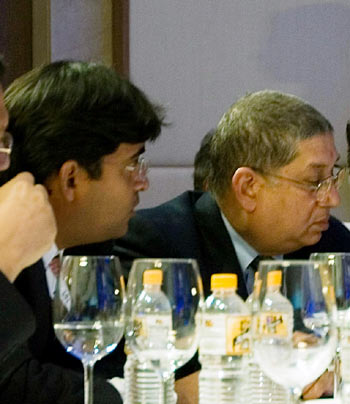 What is your take on the recent happenings in Indian cricket?

What is your take on the new agreement, wherein Jagmohan Dalmiya has been appointed interim BCCI chief?

The whole issue is totally unacceptable... the way people are behaving is a disgrace.

First of all, the whole episode is making cricket in India a laughing stock.

The BCCI has a reputation for forcing its will onto others and now it's proving that it can't even keep its own house in order.

N Srinivasan's refusal to step down, and to merely move aside, means he is still calling the shots -- you can be sure of that!

Mr Dalmiya's appointment as interim president neatly complies with one of Mr Srinivasan's demands that an appointment was made from within; so all that has happened is the same pieces have been moved into a different order.

'Dalmiya's appointment seems to have been orchestrated by Jaitley' 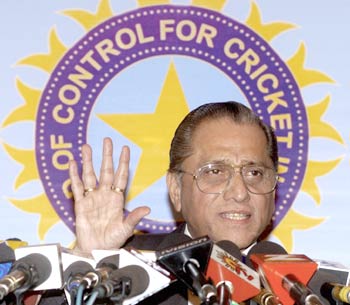 Why do you think politicians like Arun Jaitley let Srinivasan have his way at the BCCI meeting on Sunday?

Why do you think? Everyone is posturing because their own protection is worth more to them than the future of Indian cricket.

The whole thing is a sham and as the president of the Punjab Cricket Association, I S Bindra, said recently, they are taking the public for a ride.

Mr Dalmiya's appointment seems to have been orchestrated by Mr Jaitley and the wheels of the inner sanctum continue to turn without a challenge.

Meanwhile, the public is being short changed and the investigation is being conducted by insiders with Mr Srinivasan lurking in the background.

It's a complete cover up. Who was the ideal person to take over as the BCCI president?

I have advocated that Mr (Inderjit Singh) Bindra is the perfect man to restore confidence in Indian cricket.

He is a man of honour and would have the confidence of those within the structure who are seeking stability and hope.

There is none being offered at present. The whole system needs addressing and there has to be a complete change within the senior hierarchy.

It is the only way that trust can be regained. I believe I S Bindra is the perfect man to re-shape Indian cricket.

'Spot-fixing has to be attacked and the more it is delayed, the more difficult it will be' 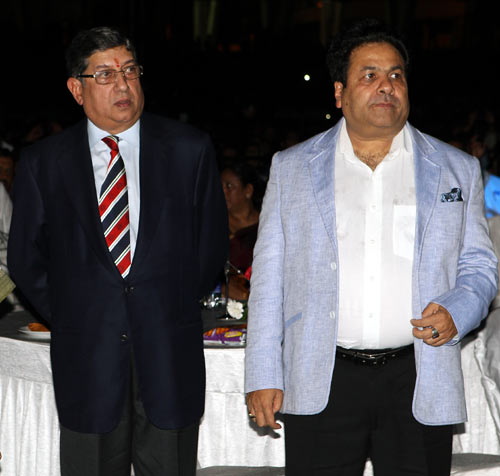 Have you ever seen a worse problem in the BCCI than this?

Put simply, no. The secretary, Sanjay Jagdale, and treasurer, Ajay Shirke, were asked to re-consider, but they refused.

Such is the depth of the problem that Mr Srinivasan is reported to have said that the resignations mean nothing!

When you have a president who loses people from two crucial positions within 24 hours and fails to recognise the significance, you really do have problems.

Every element of this sorry saga is a complete and utter disgrace in which the politics of power is more important than the future of cricket.

So how do you clean up the IPL?

Can you ever stop match-fixing or spot-fixing in cricket?

It has got to the point where you have to clean up the mess at the top before you can look at the issues that set the ball rolling.

Spot-fixing and corruption is a massive issue to face up to, but it has taken a back seat because of the shambles at the top.

Can you imagine that the BCCI, as it stands, will have ANY credibility in dealing with spot fixing?

The investigations into the son-in-law of a president who refuses to let go reflects the most obvious conflict of interest imaginable.

There can be no credibility to any of the activity that is going on and until you have confidence in those at the helm there's no point looking at anything else.

That said, spot-fixing has to be attacked and the more it is delayed, the more difficult it will be.

You have to restore a system whereby the authorities are working in tandem and the anti-corruption unit is working at full tilt.

When I was at the IPL we spoke with players all the time and the constant dialogue we had was certainly a positive aspect of the overall plan.

But don't even think of trying to instigate a plan until we have the right people in charge.

At the moment, we clearly don't.

'Anyone who thinks I am 'hiding' has got it very wrong' 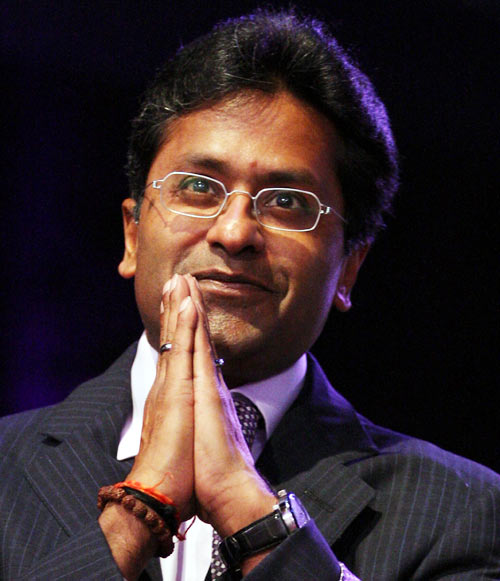 Given the chance, would you like to come back to India?

The charges made against me have all been instigated by the very administration we are talking about here.

The recent events should prove to people the type of set-up I've been dealing with.

The fact is I am currently unable to come back as my passport has been impounded and security issues surrounding my personal safety, which have been publicly acknowledged by the authorities, have been conveniently ignored.

So anyone who thinks I am 'hiding' has got it very wrong.

For three years I've been filing responses and documentation to EVERY show cause notice and each and every one of them is filed on my Web site for all to see.

I have absolutely nothing to hide, but I've been faced with a vindictive administration that is now being shown up as failed and flawed.

Perhaps, people will now begin to understand where I've been coming from for these last few years.