News
Business
Movies
Sports
Cricket
Get Ahead
Money Tips
Shopping
Sign in  |  Create a Rediffmail account
Rediff.com  » Cricket » Why Devdutt Padikkal may be the find of IPL 2020

'He has the mental strength and skill to play anybody and any attack.'
'He is a fearless cricketer.' 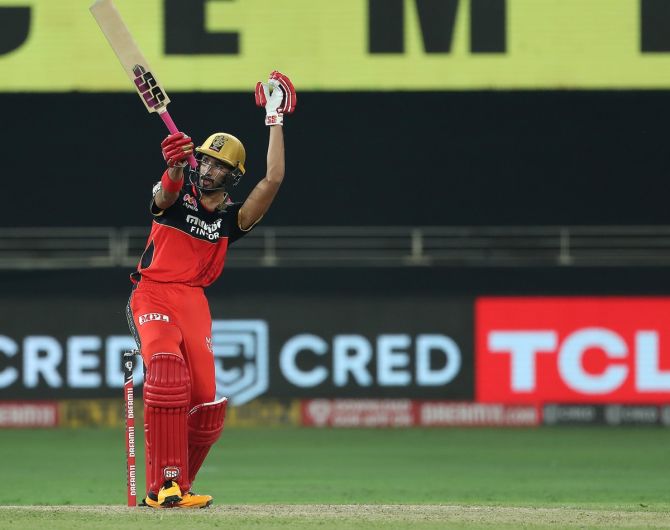 The 20 year old played a lead hand, scoring 56 off 42 balls, including eight fours, as Virat Kohli's side beat the SunRisers Hyderabad by 10 runs in their opening match of IPL 2020. 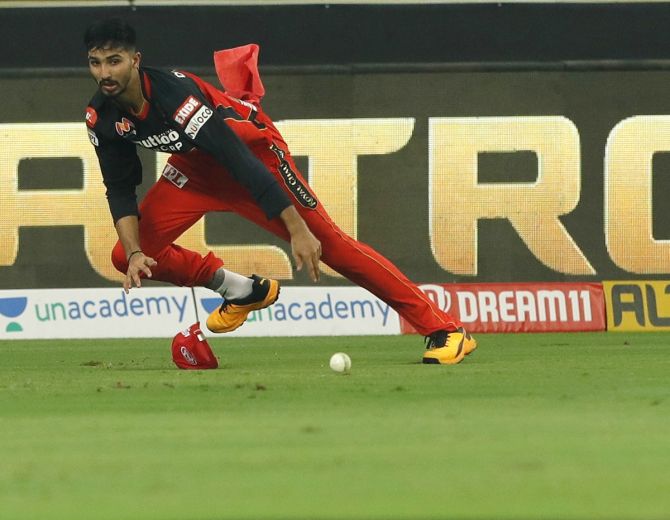 The Edappal, Malappuram, Kerala-born left-hander, who moved with his parents Ambili Padikkal and Babu Kunnath to Bengaluru very young, had an incredible run in domestic cricket in 2019.

After impressing with his stroke play, he was inducted into Karnataka's Under-14 and Under-16 teams. By the time he turned 15, he was in their Under-19 squad.

He rose to prominence during the 2017 Karnataka Premier League after smashing 72 off 53 balls, and followed it up with a stellar run in the 2018 Cooch Behar Under-19 tournament, where he aggregated 829 runs.

That was enough for a call-up to India's Under-19 squad. 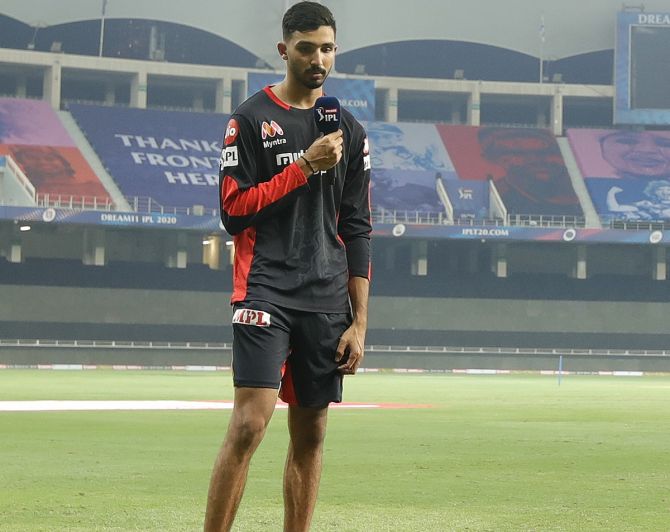 Having made his India Under-19 debut, Padikkal was picked to open for Karnataka in the 2018-2019 Ranji Trophy season.

On debut against Maharashtra, he scored 77 in the second innings.

In the 2019 Vijay Hazare Trophy, his debut List A tournament, he ended up with 609 runs.

Later that year, he debuted in the 2019 Syed Mushtaq Ali Trophy -- the Indian T20 tournament -- and top-scored, aggregating 580 runs.

Having offered enough evidence of his abundant talent, he was entrusted the role of opener for the Royal Challengers Bangalore.

And he did not disappoint on Monday.

His coaches discuss Devdutt's potential in conversations with Laxmi Negi/Rediff.com. 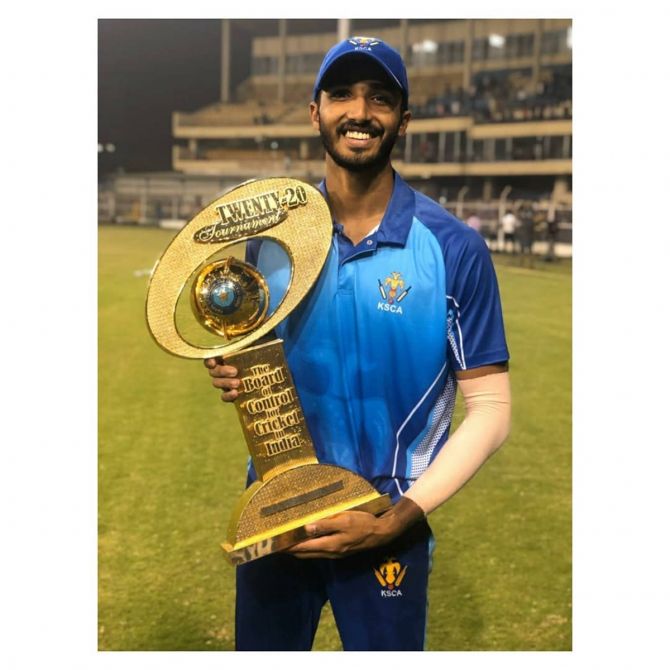 Last night when I saw him walk, I knew he would perform. He looked so calm and confident, as if he was ready.

Last year, he didn't get an opportunity in the IPL, but in domestic cricket he performed in all formats.

At the age of 15 he had the belief in his ability. He has performed well in T20s, Ranji Trophy.

Whatever situation he is in, he has performed.

Last year, we were playing in the Syed Mushtaq Ali Trophy against Andhra Pradesh and were 2 for 2 when he came in to bat.

He scored 122 off 60 balls while we were chasing 184. It was one of his outstanding knocks.

In 2018 he scored 180 against Mumbai at the BKC (Bandra Kurla Complex, Mumbai) ground. He showed that he could bat long too.

On his debut against Maharashtra he scored 70 on a difficult wicket.

He is a complete cricketer; the only thing he lacked was taking the initiative.

It was hard on him to expect him to do that at the age of 15-16, but once he started getting involved with the team, there was no looking back for him.

He has the mental strength and skill to play anybody and any attack. He is a fearless cricketer.

There will be more expectations from him now and opponents will target his weaker areas. But he has this hunger to shine.

It has been years of hard work that took him to the level that he is playing at.

Last night he showed that he could play all round the wicket; he can play the spinners well and can shine in the power-play.

He took the match away from SunRisers Hyderabad. 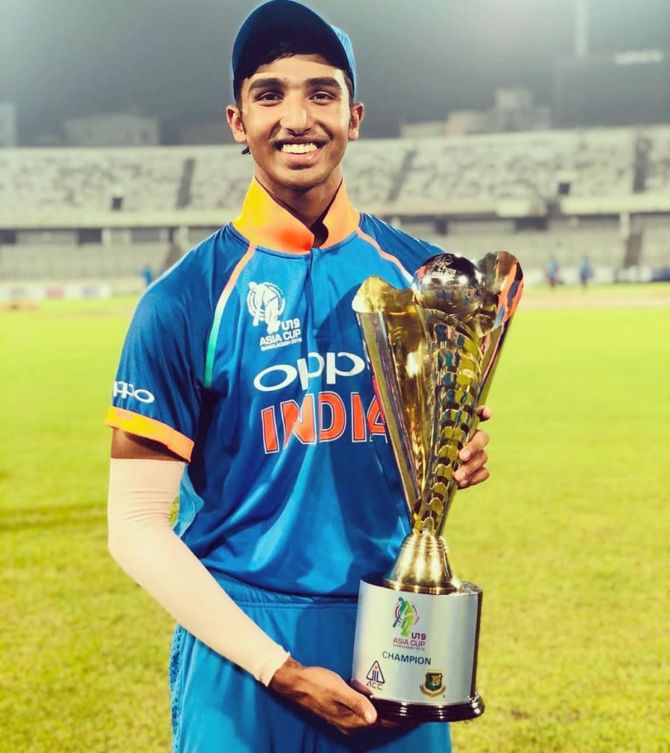 Devdutt was 15 when he came to the Under-19 Karnataka team.

In his first year he could not do much in matches, but we could see that he had the potential.

His batting was, of course, good, but his fielding was brilliant. He is also a part time off-spinner.

Over a period of time, he started performing.

When he scored 700-800 runs, and then made his Under-19 India debut, we knew that it was just a matter of time that he was going to make it big.

Within just two-three years he justified his potential. He is a smart cricketer.

The best part of his game is that he can adapt to any situation.

Cricket is a very skill-based sport. At the age of 15 a player might not be able to hit huge sixes, but his understanding of the game showed in his potential.

Last night, when he shone with the bat, it was not a surprise for me.

He is grabbing the opportunities that are coming in his way and that is the mark of a smart cricketer.

It won't be long before we see another Karnataka player in the Indian team! 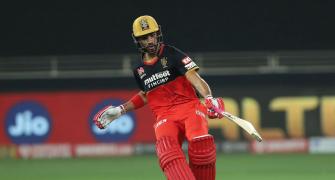 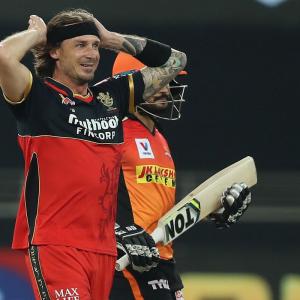 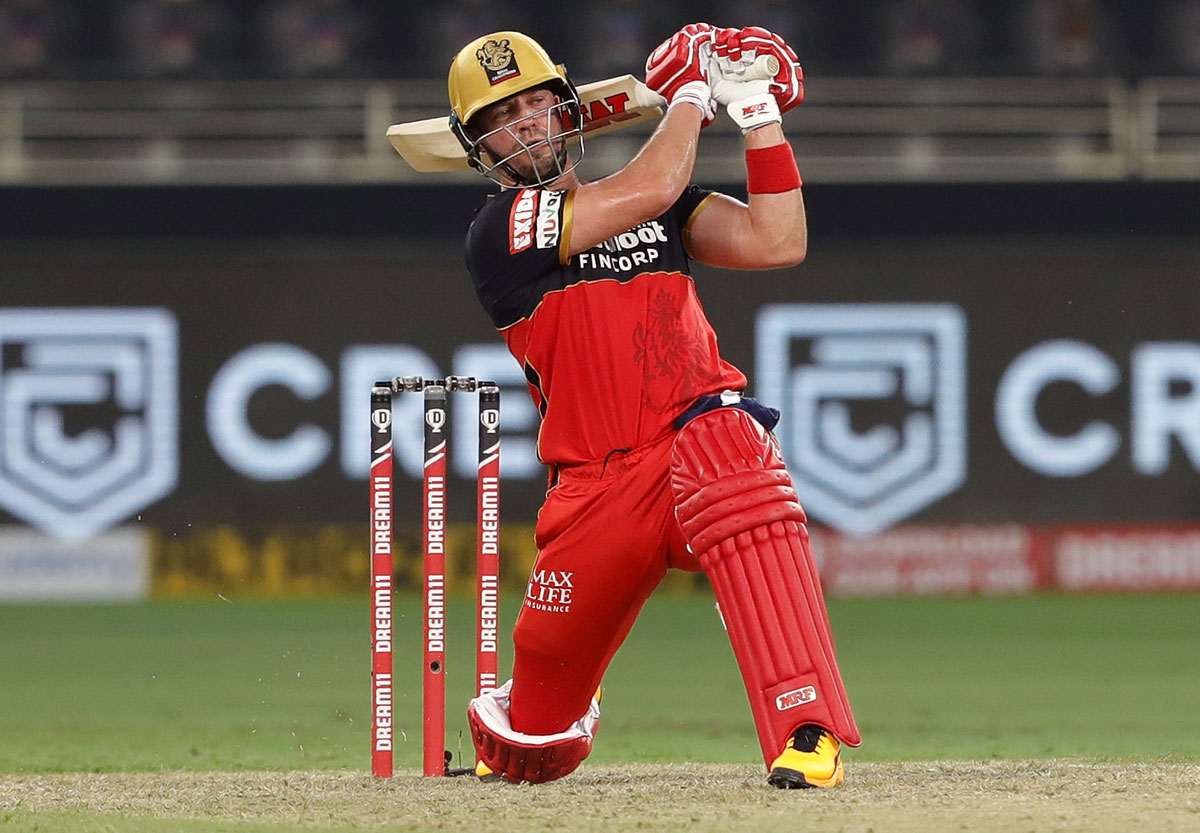