'I would prefer Karthik for World Cup'

'I don't know why they (the selectors) are making so many changes.'
'The player loses confidence also when he is dropped.' 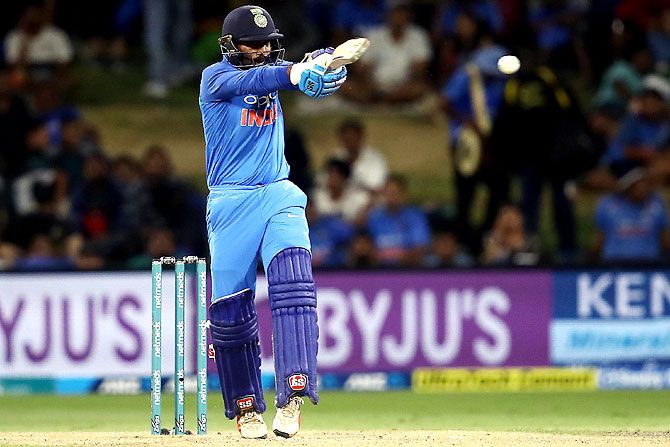 Not everything seems right with the Indian team especially looking ahead at the World Cup.

The batting order needs to be sorted out, but you don't seem to have too many options in hand.

The selectors seem to have compounded the issue with regular changes in recent months.

A year ago, Ambati Rayudu seemed to have sealed the No 4 spot, but two months away from the World Cup, he has been benched.

It was even worse for Dinesh Karthik who was dropped from the ODI team despite good performances lower down the order.

The selectors have gone with the team management's choice and picked young Rishabh Pant who has been a disappointment in ODIs.

K L Rahul has emerged as a new candidate for the No 4 slot though he is more of a top order batsman. Virat Kohli could also bat at No 4, but the skipper prefers to bat at No 3 where he has achieved such success.

Former selector Raja Venkat, who was part of the selection committee that picked the victorious Indian team for the 2011 World Cup, says the current selectors are not doing things the right way.

He reveals the 2011 selection committee led by Krishnamachari Srikkanth had its plans in place a full year ahead of the event which provided stability to the team.

"We decided on a particular 20 that we would shortlist and those 20 were who we concentrated on. The advantage we had was the team was more or less fixed, there weren't too many new faces," Venkat adds.

He recalls how Rohit Sharma narrowly missed out in 2011 because of a packed batting line-up and because the selectors wanted to include an extra spinner in Piyush Chawla.

Seven years down the line, Venkat is surprised why the current selectors are making so many changes so close to the World Cup.

"I don't know why they are making so many changes. The player loses confidence when he is dropped. If the player is in form and you give him a break and bring in players who are not in the scheme of things for the World Cup, then it is a problem," Venkat points out.

Venkat, who was a national selector from 2008 to 2012, wonders why India is struggling to find a capable batsman for the crucial No 4 position, a slot where Yuvraj Singh achieved so much success in 2011.

"They should have stuck to one person at No 4 for the last one year or so. At one stage, Rayudu looked a certainty, but all of a sudden he has disappeared from the scheme of things. I don't know if he has fallen out of favour or whether they are looking to try someone else. If that is the case, then there is none better than Rahul at No 3, which means Kohli will bat at No 4," he says.

At No 4, Rayudu has scored 750 runs in 27 games at an average of 41, including one century and five fifties. He has, in fact, batted at No 4 all through his career for India in ODIs and featured in 15 games in the last six months.

Venkat believes Rayudu, 33, should have got more chances before he was sidelined as he has shown the potential to be a good middle order batsman.

"Rayudu should have been given a longer run because of the lot, he is the one who was shaping up quite well. If Rayudu was out of form, maybe India could have tried someone like Suresh Raina. Having said that, Raina has not done anything of note recently, else he would have been a good option at No 4," Venkat adds.

Venkat, who played for Bengal in domestic cricket, says the selectors made a mistake by dropping the experienced Dinesh Karthik from ODIs as he had fared well in the finisher's role in whatever opportunities he got in the last year or so.

For the record, Karthik took India to victory in two close run chases with a run-a-ball unbeaten 38 in the third ODI against New Zealand and a quickfire 14-ball 25 not out in a high-scoring ODI against Australia, helping India chase down 299 with two balls to spare.

His famous last-ball six against Bangladesh in the Nidahas Trophy final a year ago showed that he is capable of guiding the team home in close finishes.

"Starting from that game against Bangladesh, he has taken his game to a different level altogether," says Venkat. "In English conditions, it won't be easy and you need someone experienced in the batting order. That is where Karthik will come in handy because he is very good against the fast bowlers."

He believes the experienced Mahendra Singh Dhoni is also a good fit for the No 4 slot, depending on the match situation.

"And depending on the start India gets -- like if the top 3 bat up till 25 overs -- then Dhoni should come in at No 4. Dhoni is not the same finisher he was a few years ago when right from ball one he went on the attack. Now he needs time to settle down, so he takes his time for the first 20 balls. After that, he accelerates and starts playing the big shots," Venkat explains.

"If you expect Dhoni to come in the last 10 overs and finish off things, that "doesn't look possible now," says Venkat. I would prefer Dhoni batting higher up the order, with more number of overs to play."

Venkat is not in favour of Rishabh Pant being picked for the World Cup as he believes the youngster still has to improve a lot -- in both batting and wicket-keeping. IMAGE: Rishabh Pant struggled with the gloves in the Mohali ODI against Australia, missing a crucial stumping of Ashton Turner. Photograph: PTI

Pant's wicket-keeping came in for flak during the fourth ODI against Australia in Mohali when he missed an easy stumping opportunity against Ashton Turner and also struggled to keep against the spinners.

"If his batting clicks, then it is fine, but his wicket-keeping is pretty ordinary," says Venkat. "He has to improve a lot to get into the big league. I would prefer Karthik ahead of Pant because he is experienced and knows how to bat in different situations."

Venkat's 15-member World Cup squad also does not include Ravindra Jadeja because he doesn't see the left-arm spinner getting a game in England where India will need an extra pace bowler.

"Apart from the playing 11, you will need in the reserves one spinner, one batsman, one medium pacer and maybe Vijay Shankar as the all-rounder or maybe Ambati Rayudu. Picking Jadeja will be difficult as you need wicket taking bowlers in the middle overs. India already have two very good wrist spinners and you can play only one of them in England," he says.

Contrary to the BCCI's claims Venkat says it will be difficult to convince the IPL franchises to rest the top India players during the tournament to manage their workload ahead of the World Cup.

"The franchises will not listen because they want to win the tournament. After the IPL, there are still a couple of weeks to go before the World Cup so there is some time in between. I don't think they will listen to the selectors about resting players."

"If a franchise is spending so much then he will want 100 percent from all his players. That I feel is some sort of problem for Indian cricket," Venkat adds.

He believes the IPL could be a lifeline for Karthik and Rayudu who could boost their World Cup hopes with a good showing with the bat.

If they put in good performances they could force the selectors into picking them. Similarly, a fast bowler like Khaleel Ahmed has a good chance of impressing the selectors if he bowls better than Umesh Yadav."