Rajneesh Gupta explains how Team India performed during the year across all three formats. 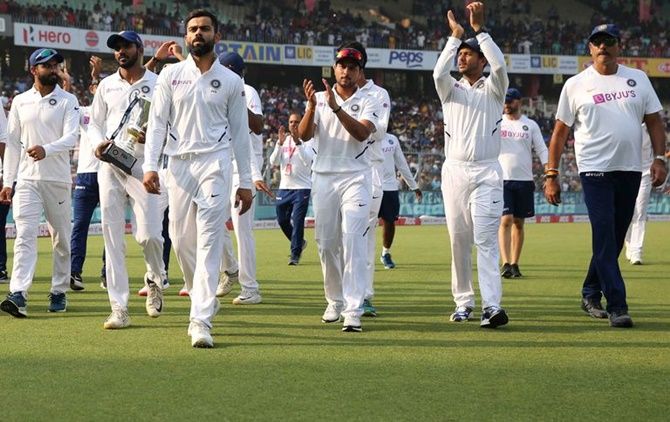 A chronology of India's performance in each series in 2019:

Some of India's record-breaking performances in the year:

Beating Australia in their own backyard 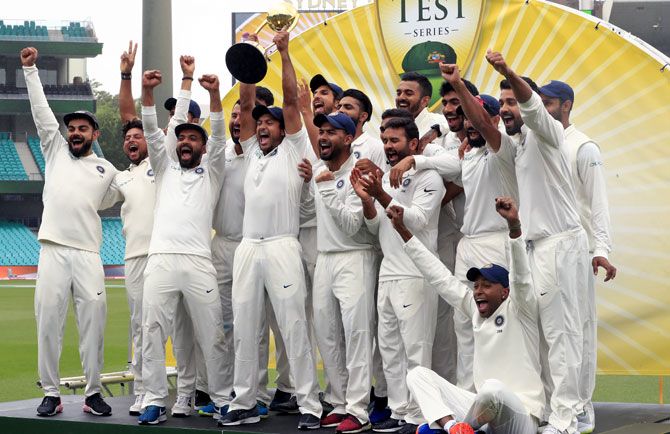 The drawn Test at Sydney in early January gave India a 2-1 series win over Australia, making India the first subcontinent team to win a Test series in Australia.

Later by winning the three-match ODI series, India became the first visiting team to beat Australia in Australia in bilateral series in all three formats on the same tour.

A record spree of double hundreds 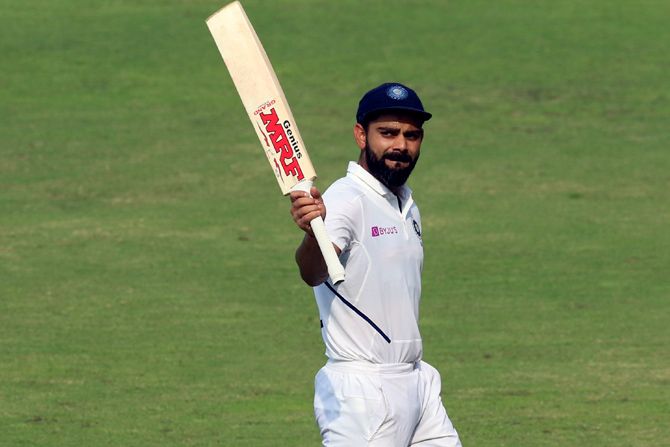 IMAGE: Virat Kohli walks back after scoring 254 not out in the second Test against South Africa in Pune. Photograph: BCCI

During the Test series against South Africa, Mayank Agarwal scored a double hundred in the first Test at Visakhapatnam.

Virat Kohli then scored 254* -- the highest score by an Indian captain in Tests -- at Pune.

Rohit Sharma then joined the fun in the third Test at Ranchi scoring 212.

India thus became the first team to have a double hundred in each Test of a three-match series Twice before had a team scored double hundreds in three consecutive Tests: Sri Lanka (in 2004) and India (2016-2017), but none of these instances came in the same series.

Mayank Agarwal then scored 243 in the first Test against Bangladesh at Indore, making it four in four! 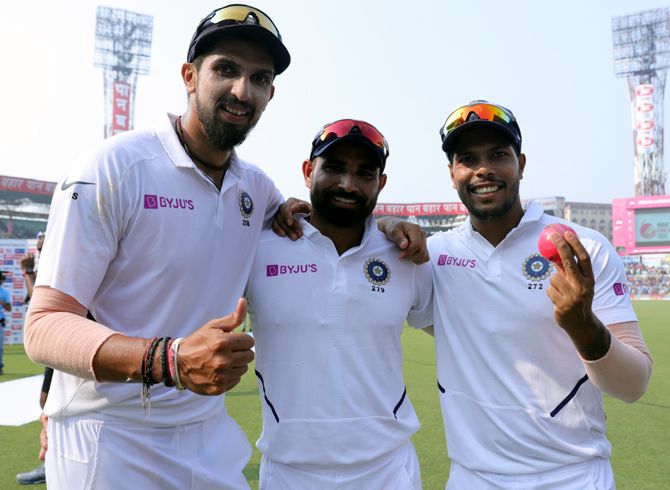 IMAGE: Ishant Sharma, Mohammed Shami and Umesh Yadav took 19 wickets in the second Test against Bangladesh at the Eden Gardens in Kolkata. This was the first pink-ball Test played in India. Photograph: BCCI

History was made when India defeated Bangladesh by an innings and 46 runs in the Kolkata Test.

This was the fourth consecutive innings win for India.

The sequence started with the Pune Test against South Africa, which India won by an innings and 137 runs.

This was followed by a win by an innings and 202 runs at Ranchi.

Then in the first Test against Bangladesh, India registered a win by an innings and 130 runs before registering another massive win at the Eden Gardens.

While there are a few instances of a team winning three consecutive Tests by an innings margin (India themselves have done so on two other occasions), no team had won four in four before India. 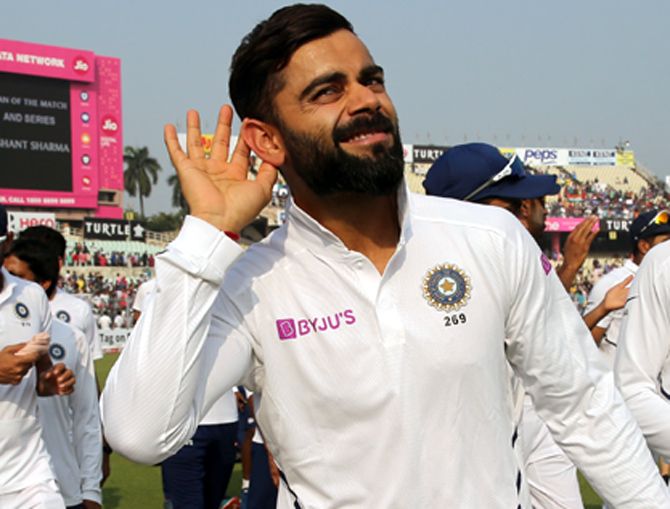 IMAGE: All the seven wins in the current sequence has come under Virat Kohli. Photograph: BCCI

India have now won seven Tests on the trot -- two vs the West Indies in the Caribbean, three vs South Africa at home and two vs Bangladesh also at home.

This is now India's longest winning streak in Test cricket.

The previous record was of six consecutive Tests -- all under M S Dhoni -- between February and November 2013.

All the seven wins in the current sequence has come under Virat Kohli.

After getting bowled out for 416 in the first innings of the Kingston Test against the West Indies in August, India were not dismissed even once in the next seven innings.

This seven-innings streak is the longest streak of declared innings by any team in the Test cricket.

The previous record was held by England with six consecutive declared innings during the tour of the West Indies in 2009.

Statistically speaking, this is the most successful year for India in Test cricket with an 87.50% winning record.

India had a 75% win-record on three occasions.

Most successful years for India (in Tests)

A year of hat-tricks for Indian bowlers

Mohammed Shami (during the World Cup), Jasprit Bumrah (in a Test), Deepak Chahar (in a T20I game) and Kuldeep Yadav (in an ODI game).

India thus became the first team with a hat-trick across all three formats in the same calendar year.

Hat-tricks by Indian bowlers in international cricket in 2019

A series of towering sixes 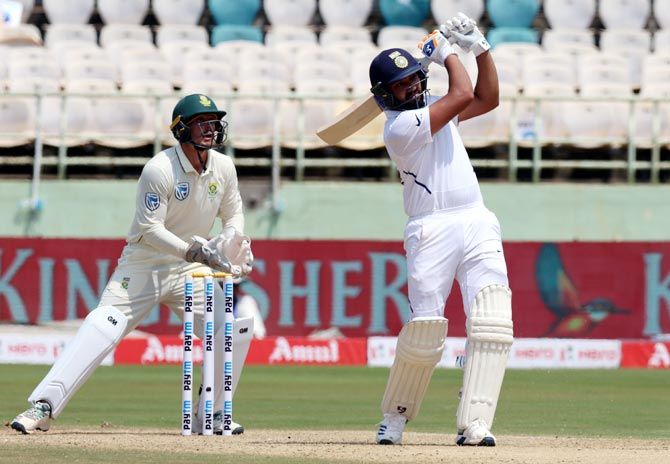 IMAGE: Rohit Sharma during his century against South Africa at Visakhapatnam. Photograph: BCCI

Rohit Sharma -- opening the innings for the first time in a Test against South Africa at Visakhaptnam -- hit six sixes in the first innings and seven sixes in the second innings.

Other Indians also jumped in and as many as 27 sixes were hit in the Test by Indian batsmen -- the most ever hit by any team in a Test.

New Zealand's 22 sixes against Pakistan at Sharjah in 2014 were the previous most.

20 more sixes were hit by India in the next two Tests, taking the series tally to 47 -- the most ever hit in a series.

The enviable record at home

The two series wins against South Africa and Bangladesh meant India won 11 consecutive Test series at home since the 2012-2013 season, a new record. 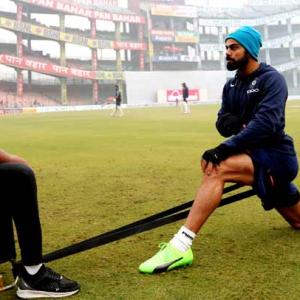