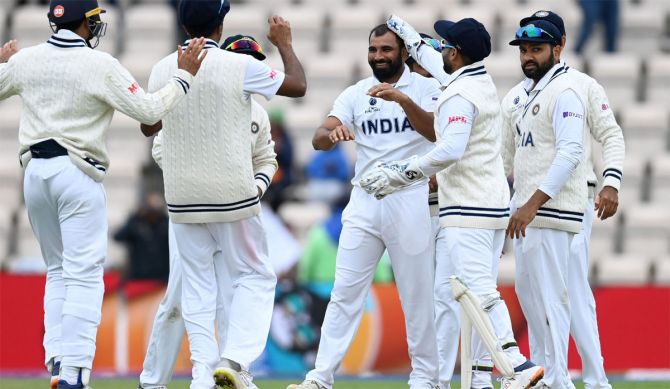 IMAGE: India's players celebrate after Mohammed Shami dismisses B J Watling during Day 5 of the World Test Championship Final, at The Hampshire Bowl in Southampton, on Tuesday. Photograph: ICC

India will be looking to set New Zealand a target only after having enough "back-up runs" on the final day of the World Test Championship final, said senior pacer Mohammed Shami, after close of play on Tuesday, hinting that the team would adopt a 'safety first' approach.

India were 64 for 2 in the second innings at stumps on the fifth day, 32 runs ahead. Skipper Virat Kohli (batting 8) and the seasoned Cheteshwar Pujara (batting 12) were at the crease.

"We have lost a lot of time due to rain, so there is no discussion as such on a total. We have just started our second innings and we need to put runs on the board," Shami, India's man of the day with four wickets, said at the media conference.

"We have to score as many as possible and then see how much time is left to put them in and decide accordingly.

"In conditions like England, anything can happen but we simply can't have a pre-plan in mind that we can get them out in this many overs. You need time to get 10 wickets and some solid plans in place. But, first, we need to have enough back-up runs," added Shami, which means India won't mind a draw in current circumstances.

Shami was the pick of the Indian bowlers on the fifth day and pleased that the plans he wanted to execute came off nicely.

"Obviously, as you play the Test match you can't stick to one plan for five days. You need to be flexible and set up lines as per the track. We needed to bowl those tight lines which benefits the team in order to restrict New Zealand to as less as possible. So the pressure created momentum and we got wickets in clutches."

A captain's go-to bowler, the veteran speedster is happy that he has been able to perform his duty in an effective manner.

"Whenever I have been entrusted with responsibility, I have put in my whole-hearted effort. Whatever be situation, I know what captain wants and then I follow his instructions. I have always been an attacking bowler who goes for wickets."

So did he have any regrets in missing out on a five-for?

"When you play for India, you have no such regrets. You can't think about personal milestones." 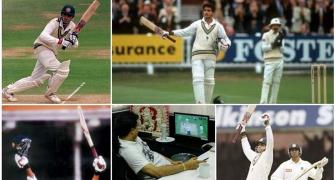 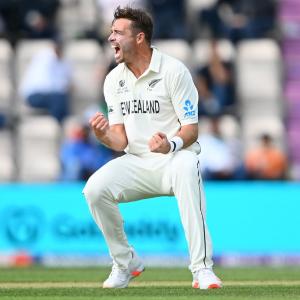 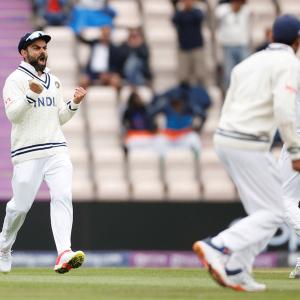