Day 2 of the World Test Championship Final between India and New Zealand produced 64 overs of play, and Day 3 is more or less likely to be similar, although the threat of rain does lurk over the game.

The weather forecast for Sunday currently appears good enough ahead of the start of Day 3.

As per the forecast on AccuWeather, the chances of showers in the morning are somewhere around 40 to 50 per cent, and while cloudy weather beckons, there is a strong possibility of some showers halting play.

'Heavy showers continuing during the morning, gradually easing during the afternoon to allow some brief sunny spells. Staying dry into the evening and overnight. Maximum temperature 21 °C', according to the UK Met department.

The final hour or so of Day 3 is expected to remain clear, but overcast skies promise to remain throughout, which may once again lead to light issues in the final stages of the day. 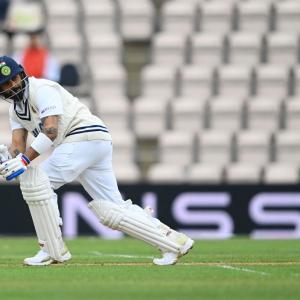