IMAGE: Ajinkya Rahane and Cheteshwar Pujara walk across the outfield as rain delays the start of Day 4 of the ICC World Test Championship in Southampton on Monday, June 21, 2021. Photograph: Alex Davidson/Getty Images

As expected, the weather played spoilsport as the fourth day's play of the World Test Championship at the Ageas Bowl in Southampton on Monday was abandoned because of rain.

Persistent rain since Sunday night meant that the umpires were forced to call off play on Day 4 without a ball being bowled. IMAGE: Rohit Sharma with a Sainsbury bag. Something to munch for Ritika and Samaira, Ro? Photograph: Alex Davidson/Getty Images

Some of the Indian players, bored of sitting inside the dressing room, came out for a stroll. Rohit Sharma, Ajinkya Rahane and Cheteshwar Pujara took a walk in the rain. Meanwhile, Black Caps pace sensation Kyle Jamieson was in no mood to relax as he played table tennis with a team mate.

'Wet weather has returned to the Hampshire Bowl so it's table tennis for now', the Black Caps tweeted. IMAGE: The Ageas Bowl in Southampton under covers because of rain on Day 4 of the World Test Championship Final on Monday. Photograph: Alex Davidson/Getty Image

Former England captain Kevin Pietersen says an important one-off match like the World Test Championship Final should not have been played in the UK, considering the unpredictable English weather.

'If it was up to me, Dubai would always host a one off match like this WTC game. Neutral venue, fabulous stadium, guaranteed weather, excellent training facilities and a travel hub!' KP tweeted.

'Oh, and ICC home is next to the stadium.' India were left frustrated on Day 3 of the WTC final as the New Zealand batsman batted steadily.

India looked in control as they started Day 3 on 146 for 3 in the rain-hit WTC final, but things changed quickly in the morning session, which was delayed by 30 minutes due to rain.

Jasprit Bumrah and Ishant Sharma failed to make an impression with the new ball and it was only Mohammed Shami who created some chances on Day 3 of the WTC Final on Sunday.

Disappointed by the performance of India's seam trio, some cricket fans made Bhuvanesh Kumar a trending topic, discussing just how much Team India is missing his services in this game. 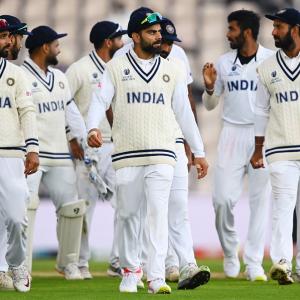