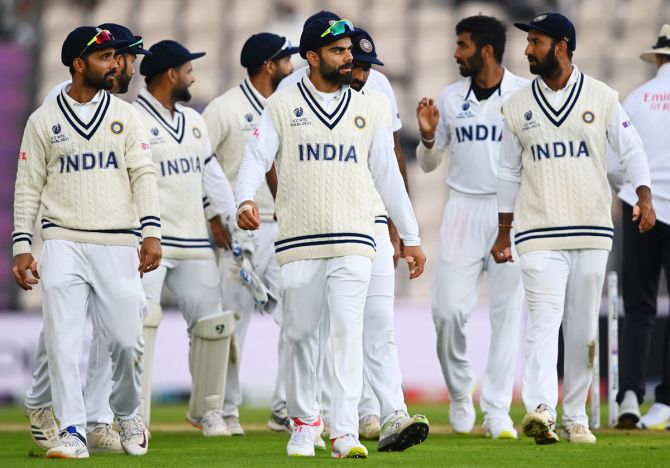 IMAGE: The Indian players leave the field after play was suspended due to bad light on Day 3 of the World Test Championship Final in Southampton on Sunday, June 20, 2021. Photograph: Alex Davidson/Getty Images

A determined New Zealand bounced back instyle on the third day to gain the upper hand in the World Test Championship Final,in Southampton on Sunday.

India looked in control as they started Day 3 on 146 for 3 in the rain-hit WTC final, but things changed quickly in the morning session, which was delayed by 30 minutes due to rain.

Unlike the previous day, the New Zealand pace bowlers started off in the right fashion with disciplined bowling, hit the right areas and forced the Indian batsmen into mistakes.

India were looking to Captain Virat Kohli and his deputy Ajinkya Rahane to build their innings, but Kyle Jamieson thwarted all their plans with an excellent spell.

Jamieson put the Indians on the backfoot early on the third day with the key wicket of Kohli, who was unable to add to his overnight score of 44.

Kohli was done in by the full inswinger from Jamieson which struck him right in front, a decision which he reviewed but was unable to overturn.

Jamieson nearly got Rishabh Pant in the same fashion. Pant survived the leg before shout courtesy the on-field umpire's call. But it was not long before the Kiwi fast bowler snapped up Pant, who played a rash shot, chasing a wide delivery only to get an edge and was caught in the slips.

Those two big wickets in the space of six overs dented India big time. Rahane looked to steady the ship in the company of Ravindra Jadeja, but the vice-captain was also guilty of giving his wicket away with a reckless shot. 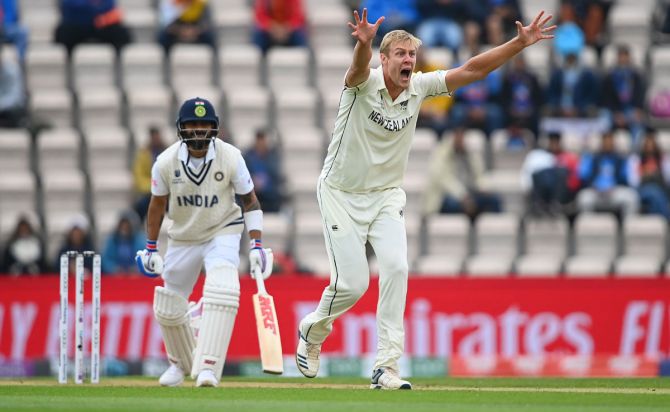 Ravichandran Ashwin batted positively to score 22 as he took India past the 200 run mark but he was caught in the slips off Tim Southee.

Jadeja got a lifeline when he was put down by Southee at third slip off Trent Boult. But Jamieson polished off the Indian tail quickly after the lunch break.

Jadeja (15 from 53 balls) was caught down the leg side by off Boult as India were bowled out for 217, losing their last three wickets in the space of four deliveries.

New Zealand openers Tom Latham and Devon Conway consolidated their team's position as they made a cautious start. Bumrah and Ishant failed to make an impression with the new ball and it was only Mohammed Shami who created some chances as he got Latham to edge a rising delivery which flew over the slips.

The Kiwi openers put on 70 before Ashwin ended India's frustration with the wicket of Latham, who was caught in the covers for 30.

Conway carried on to thwart the Indians as he continued his dream start to Test cricket. Conway, who scored a double century on his Test debut against England earlier this month, hit a resolute half-century from 137 balls.

The left-hander's resistance was finally broken just before the close of play for bad light, as he was caught off Ishant Sharma at mid-on in the final over of the day, providing India with a late boost.

New Zealand are sitting pretty on 101/2 after a gritty showing with both bat and ball, and India need to strike a few early blows on Day 4 to get themselves back in the contest. 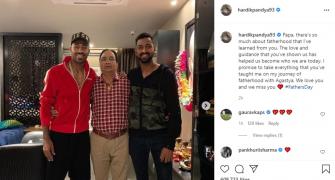 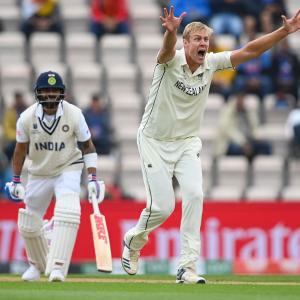 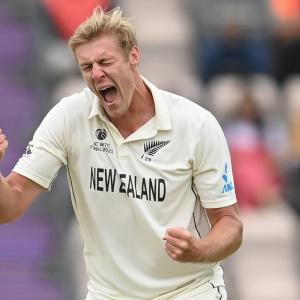