Pakistan opened their World Cup campaign with a thumping 205-run victory over an unimpressive Kenya, in a Group A match, at Mahinda Rajapaksa international cricket stadium in Hambantota on Wednesday.

It is Kenya's second successive defeat in the mega-event following the 10-wicket demolishing by New Zealand in their tournament-opener on Sunday.

Pakistan next play Sri Lanka in Colombo on Saturday.

Pakistan came up with a superb all-round display against the Kenyans. After piling a mammoth 317 for seven, they dismissed the minnows for a paltry 112 in 33.1 overs. 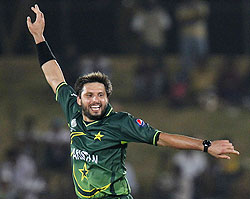 Even though he failed with the bat, skipper Shahid Afridi led from the front while defending the target, picking five wickets for just 16 runs in the former champions' comprehensive victory.

Only four Kenyan batsmen got to double figures, Collins Obuya top-scoring with a gutsy 47 off 58 balls.

Earlier, Pakistan's middle-order came up with some splendid batting to steer the team to a massive 317 for 7 after opting to bat.

Shrugging off a poor start, Kamran Akmal (55), Younis Khan (50), Misbah-ul-Haq (65) and Umar Akmal (71) chipped in with valuable half-centuries each to post a challenging total.

While it was the experienced Younis and Kamran who helped the team recover from early stutter, Misbah and Umar capitalised on the duo's showing to pile up runs at the Mahinda Rajapaksha international cricket stadium.

From 12 for two in 6.5 overs, Younis-Kamran lifted Pakistan to 110 for three, sharing a crucial 98-run third-wicket stand before quickfire knocks from Misbah and Umar turned the tide completely for Pakistan.

Misbah scored 65 off 69 balls, inclusive of one four and two sixes, while Umar hit 71 off 52 balls, including eight fours and a six, as they put up 118 runs for the fifth wicket.

It was Otieno, who provided the early breakthrough for the African nation as Seren Waters took a fabulous catch to see off Hafeez. In the very next over, Odoyo got rid of Shehzad, who played 18 balls to score just one. 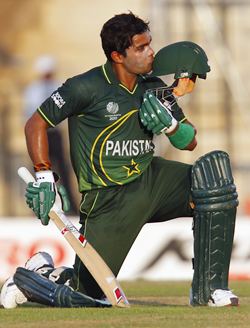 It was then up to the veterans Kamran and Younis to consolidate the innings. The duo responded to the calls but survived some anxious moments before opening their arms.

The moment Nehemiah Odhiambo was introduced into the attack, Younis went for a four, which was followed by Akmal's two consecutive hits to the fence in the same over, as 16 runs came from it, including three no-balls that lifted some pressure off Pakistan, as they crawled to 40 for two in 10 overs.

Thereafter, Kamran started to dominate the proceedings and with able support from Younis slowly but steadily built the innings.

Kamran soon completed his half-century, but just when he was looking dangerous, left-arm spinner Shem Ngoche sent him back after a well-made 55 off 67 balls, studded with five fours.

Younis continued with Misbah-ul-Haq before Steve Tikolo cut short his innings of a 67-ball 50.

Misbah, who was dropped on six, and Umar then toyed with the Kenyans bowlers, sending them on a leather hunt.

Umar made the most of the batting powerplay that Pakistan took in 43rd over as 70 runs were scored in five overs.

The Kenyans conceded 46 extras, including 37 wides.

And, by the time Odoyo (7-2-41-3) dismissed Umar and Afridi in consecutive balls in the penultimate over, damage was already done.

It was an important innings for Pakistan, who have not progressed beyond the first round of the World Cup in the last two editions.