Cauvery matters to Chennai-ites, no doubt over it, but not at the cost of cricket, or its home team, or its favourite captain, reports A Ganesh Nadar after watching Tuesday night's zinger of a match between CSK and KKR. IMAGE: Protests were held outside Chennai's M A Chidambaram stadium on Tuesday, April 10, to demand the cancellation of the CSK versus KKR IPL game, over the Centre's failure to constitute the Cauvery Management Board. Photograph: PTI Photo

This was the instruction to spectators from the IPL board following threats from Tamil Nadu's pro-Cauvery activists who wanted the Chennai Super Kings versus Kolkata Knight Riders game on Tuesday cancelled as they felt aggrieved over the central government not forming a Cauvery Management Board in spite of a Supreme Court order to do so.

In the state itself, opinion was sharply divided on the issue.

While some suggested a ban on all IPL games in Chennai, others suggested other forms of protest.

Superstar Rajinikanth broke his silence on the side of his adopted state and said CSK players should wear black bands, leading a wit -- given the numerous sponsorship logos on players' jerseys -- to suggest that these black bands could be sponsored by Black Label.

As earnest as the protestors were on disrupting Tuesday's humdinger of a match -- with agitations engulfing parts of Chennai, even leading to the arrests of a couple of protestors -- it was evident from the packed stands as well as the delirious reception accorded to CSK Captain M S Dhoni -- which out-decibelled the applause accorded to local boy Dinesh Karthik who was captaining the rival team -- that there was no stopping the game.

That the tie was a sellout was evident on Monday itself when tickets were being sold on the black market for as much as Rs 6,000.

By 8 pm on Tuesday Chennai's M A Chidambaram stadium was packed to the rafters, and it was obvious that Cauvery had lost out to Cricket.

Try as the protestors might, there was no way for them to breach the 4-tier security put in place.

Of this phalanx, the inner ring was the happiest as they were sitting in the stands and watching the game, ready to apprehend any trouble-maker from within.

But the scene at the entrance to the stadium was different.

"Take out everything from your pockets unless you want me to put my hands inside," the policeman told me sternly.

To my quizzical look he responded, "Sir, they are carrying these small bands with protests written on them and we have been told to seize it."

Obviously the policemen were not very successful at confiscating the pamphlets, with the words 'Form Cauvery Board' on them, which were soon floating about the stadium.

If you were impressed by the sea of yellow on the television screens on Tuesday night, don't be.

Sure, the CSK fans outnumbered KKR's, but it was not as if all of them had picked up yellow T-shirts on the way to the stadium.

What had happened was that the CSK management was distributing yellow T-shirts free to spectators inside the stadium.

And to those don't associate the spirit of commerce with Chennai, a word of caution.

Quick-thinking locals were selling these self-same T-shirts outside the stadium for as low as Rs 100.

How did I know? Because I was among those who bought one, only to realise my folly once inside the stadium.

But the cops did have their way even here -- they confiscated the plastic bag in which the T-shirts were packed.

As the match was in progress, there was a bit of commotion when some flying objects landed on the ground close to a fielding Ravindra Jadeja.

The cops stationed in that stand spread out, looking for the culprits, and detained a few from the outfit Naam Thamizhar.

Jadeja got his revenge when he scored the winning six off Vinay Kumar off the penultimate delivery.

As the match wound its way to a nail-biting end -- as those involving CSK usually do -- it was clear that apart form the floating protest bands there was nothing else happening inside the stadium.

Cauvery matters to Chennai-ites, no doubt over it, but not at the cost of cricket, or its home team, or its favourite captain.

It was clear on the way out that the protests existed more in the newspaper columns and television anchors's heads than on the ground. 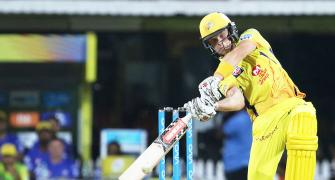 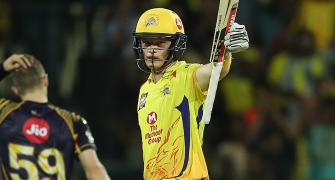 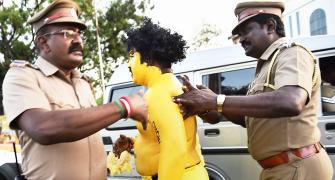 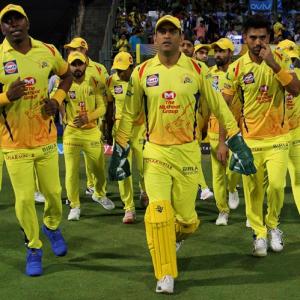 CSK, Royals take guard to put troublesome past behind