'The Pakistan teams of the 90's, used to enjoy upper hand but now India is better'

'We are not handling pressure well. The team that handles pressure in these games win' 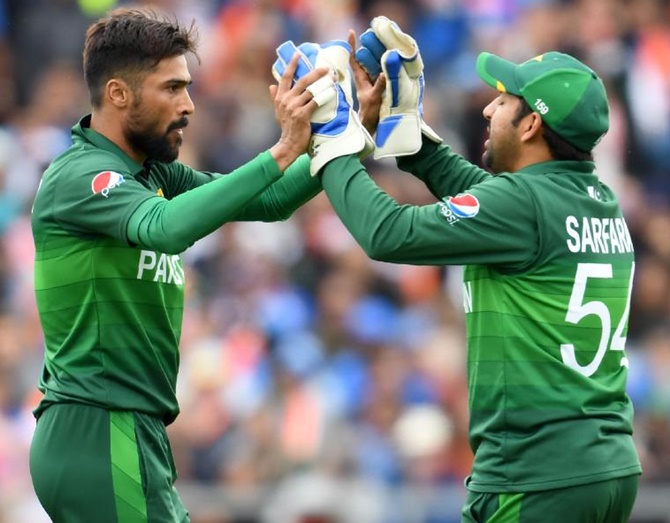 IMAGE: The Pakistan captain was literally hounded by his country's media. Photograph: ICC/Twitter

Pakistan captain Sarfaraz Ahmed has reconciled to the fact that they 'were a better team than India in the 90's' and now the tables have turned.

The soft-spoken Pakistan captain was literally hounded by his country's media with a host of uncomfortable questions following the team's heavy defeat against India, in Manchester, on Sunday.

Asked if the Indo-Pak rivalry has fizzled out over the years, Sarafaraz said: "We are not handling pressure well. The team that handles pressure in these games win. The Pakistan teams of the 90's, used to enjoy upper hand but now India is better than Pakistan. That's why they win matches."

Prime Minister Imran Khan's advice was 'bat first even if the pitch is damp' but Sarfaraz Khan doggedly defended his decision, saying the reason for defeat was 'failure in all three departments'.

The Pakistan Prime Minister and an iconic World Cup winning captain, in a series of tweets on the marquee clash, had spoken about the right approach for the high-pressure game.

"The whole team is not performing well in all three departments. If you talk about fielding, even Virat Kohli had said that he would have fielded. We haven't seen the pitch for two days. There was some moisture and hence I decided on fielding. We won a good toss but didn't hit the right length," said Sarfaraz.

A defeat against India inevitably gives rise to conspiracy theories and the post match media interaction was no different.

"Why is it that the players' body language is so negative?" asked one of the scribes. The manner in which Sarfaraz kept his counsel was remarkable.

"May be you guys have seen something in the body language but players are trying their best. There has been fielding lapses. Rohit could have been run-out twice and had we availed those chances, it could have been a different result."

Another one asked, "Have all players been physically and mentally fit to take on India?"

"There are no issues with anyone. Imad Wasim (gastric problem) had an issue but everyone had passed the fitness test. Now that we have lost, you can raise the issue."

The third person's query was about what happened to agitated Mohammed Amir gesticulating to media manager Raza Kitchlew.

"I didn't see anything. May be he was angry because he was trying to get wickets which he didn't get," Sarfaraz reasoned.

He also clarified on the alleged rift in the dressing room with seniors like Mohammed Hafeez and Shoaib Malik being unhappy with his leadership.

"There are no ill-feelings in the dressing room. The boys are backing each other. As far as why I didn't give Hafeez and Shoaib more than an over, it is because I felt there was no need for that. The batsmen were set and they went for runs (11 each) in the only over that they bowled."

Although it's a Herculean task for a team placed ninth among the 10 competing nations but he said that the endeavour is to win the remaining four games, said Sarfaraz.

"We should try to be positive and think like, okay we didn't play good cricket but let's try and win four games in order to bounce back," he added. 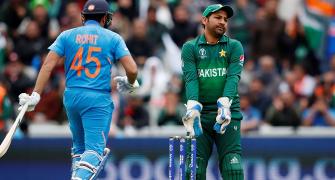 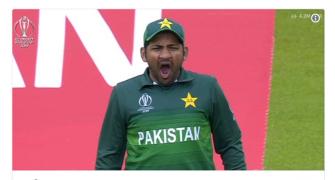 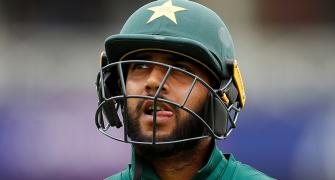 No room for error after India loss, says Pakistan's Wasim 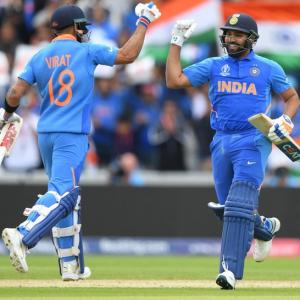