Warne's Warriors too good for Sachin's Blasters in Game 2 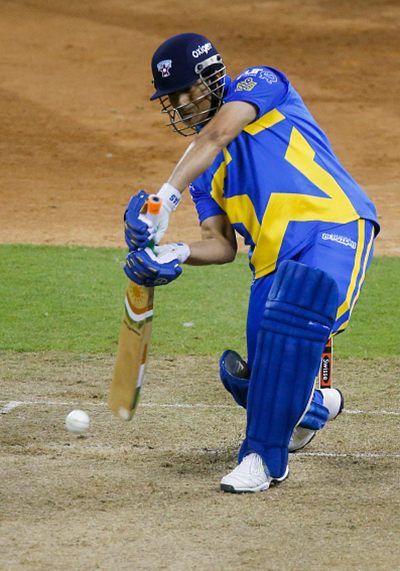 The victory gave the Warriors, who won Game 1 by six wickets, an unassailable 2-0 lead in the three-match series.

Shaun Pollock was their top scorer with 55 off 22 balls while Graeme Swann was unbeaten on 22.

Symonds finished with figures of 4 for 65 in his four overs while Mushtaq, who claimed the prized wicket of Sachin Tendulkar (33 off 20 balls), had figures of 2 for 12 in his three, off which one was a maiden.

The third and final match of the series is in Los Angeles on November 14.

Though the outcome of the match was not that significant, considering the series is mere exhibition, the famed former cricketers from both teams displayed fierce competitive spirit.

The competitive zeal was evident when the dream opening pair of Tendulkar and Virender Sehwag walked into the middle.

What made the contest more mouthwatering was Wasim Akram opening the bowling for the Warriors and swinging the ball in from the word go.

However, Sehwag still found a way to break free by flicking the last delivery of the over beyond the square leg fence.

The recently-retired opener looked in ominous touch, as it was the case in New York in the first game, hitting his second six over cover in the following over, bowled by Ajit Agarkar. He played a rare dot ball after smashing Agarkar before playing on to his stumps.

It was now Tendulkar's turn to use the long handle. The master blaster hammered three fours and couple of sixes before his old foe, Saqlain Mushtaq, found his stumps with a fast off-spinner.

Ganguly, playing his first game of the series, was rusty to start with but managed a four and a big hit in his run-a-ball knock of 12.