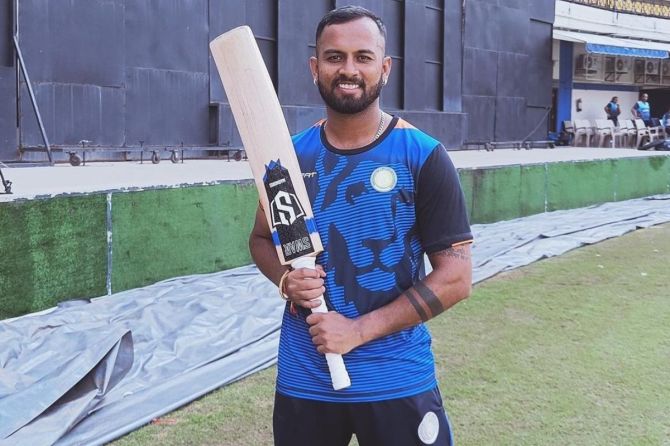 Saurashtra opener Samarth Vyas recorded a magnificent double century while Dharmendrasinh Jadeja bagged an incredible 7/10 as their team crushed Manipur by 282 runs in the Vijay Hazare Trophy in New Delhi, on Sunday.

Manipur won the toss and opted to field first in the Group A game, after which the minnows from the northeast were subjected to a brutal onslaught for a major part of the 50 overs at the Jamia Millia University Cricket Ground.</>p

Thanks to Vyas' 131-ball 200 and Harvik Desai's 100 off 107 deliveries, Saurashtra posted a record 397 for four. The highest team total was previously set by Gujarat, who made 363 for six against Vidarbha in the previous season.

In reply, Manipur were all out for a paltry 115 as Dharmendrasinh Jadeja finished with 7 wickets in 10 overs, including as many as six maidens. Vyas smashed nine sixes and 20 boundaries during his stay in the middle while his opening partner, wicketkeeper Desai, hit two sixes and nine boundaries. </>p

The duo of Vyas and Desai took the opposing bowlers to the cleaners throughout the innings while stitching a massive first-wicket partnership of 282 runs.

The Saurashtra openers batted till the 37th over before Desai was caught by Ajay Lamabam off a Johnson Singh delivery.

Vyas continued with his aggressive ways until Bishworjit Konthoujam ended his stay in the 45th over, getting the Saurashtra opener caught by Rex Singh.

In the day's other Group A matches, Uttar Pradesh beat Himachal Pradesh by five wickets, while Tripura stunned Hyderabad by seven wickets.

Senior left-arm pacer Pradeep Sangwan, Shivank Vashisht and Nitish Rana took a couple of wickets each to restrict Meghalaya to 216 for seven in 50 overs. Outstation player Punit Bisht top-scored with 75 off 80 balls.

Dhull, at number three, was impressive with an unbeaten 71 off 64 balls. Veteran India pacer Ishant Sharma, who starred in the opening game against Vidarbha, did not play on Sunday.

In other Group B matches in Kolkata, Karnataka beat Vidarbha by 66 runs while Jharkhand beat Assam by eight wickets. Rajasthan defeated Sikkim by seven wickets.

Bengaluru:  Wicketkeeper-batter N Jagadeesan starred with a knock of 114 off 112 balls in Tamil Nadu's nine-wicket win over Andhra in a Group C match of the Vijay Hazare Trophy one-day cricket tournament here on Sunday.

Tamil Nadu chose to field after the coin landed in their favour and the bowlers did well to bundle out the opposition for 205. Openers Jagadeesan (12 fours, 2 sixes) B Sai Sudharsan (73 off 75 balls, 7 fours, 2 sixes) then helped Tamil Nadu cruise to the target in 32.1 overs.

Andhra had looked in a good position at 143 for 1 with opener Abhishek Reddy and captain K S Bharat at the crease. But medium-pacer Sandeep Warrier removed Reddy for 85 (99 balls, 9 fours, 1 six) to a catch by B Aparajith.

The TN bowlers kept striking at regular intervals with lanky left-arm spinner R Sai Kishore (2 for 27 in 10 overs) choking the scoring while medium-pacer R Silambarasan (3 for 49) and Sanjay Yadav (2 for 34) also did the job for the team.

Chasing 206 for victory, Jagadeesan (12 fours, 2 sixes) and fellow opener Sudharsan forged a good partnership and attacked from the word go. The 177-run stand in just over 28 overs put Tamil Nadu firmly in control.

Sudharsan was run-out by Ashish but Jagadeesan continued to have a go at the Andhra bowlers and the team romped home in the 33rd over.

There were wins for Kerala, Haryana and Goa. All the first-round matches on Saturday were washed out.

Brief scores of other matches in Group C:

Mumbai:  Young Vivrant Sharma produced a sensational all-round performance to fire Jammu and Kashmir to a 94-run win over Baroda in a rain-hit group D match of the Vijay Hazare Trophy here on Sunday.

Sharma hit an 87-ball 64 after opening the innings and then returned to snap four wickets with his left-arm spin to emerge as the most valuable player in the 50-over match that was reduced to 49 overs each due to a wet outfield.

If Sharma slammed seven fours and a six in his knock, Abdul Samad (64 off 52 balls) and Fazil Rashid (55 off 52 balls) also hit fluent fifties, as JK posted a challenging 282 for six after opting to bat at Bandra Kurla complex.

Ambati Rayudu was the top-scorer for Baroda with a 63-ball 49, while Ninad Rathva (30), Atit Sheth (29) and Bhanu Pania (28) also tried to keep them in the hunt but failed to extend their stay.

In another match, at the Dr DY Patil Sports Academy, Punjab rode on Mandeep Singh's unbeaten 111-ball 100 to notch up a six-wicket win over Uttarakhand.

Sent in to bat, Uttarakhand couldn't force the pace of the innings and were bowled out for 255 in 49.1 overs.

If Avneesh Sudha cracked a 64-ball 51 at the top, No. 7 Vaibhav Bhatt managed a 49-ball 41, but a disciplined bowling attack led by Abhishek Sharma (3/31) helped them to keep things in check.

Chasing, Punjab had a disastrous start and were reeling at 21 for three in 6.1 overs but Mandeep and Anmol Malhotra (46) steadied the innings and also brought up the 100.

After Malhotra perished, Mandeep found an able ally in Sanvir Singh (84 not out) as the two joined hands to complete the job.

Ranchi: Openers Shubam Rohilla and Ravi Chauhan hammered centuries as Services trounced a formidable Mumbai by eight wickets, reaching the target of 265 in 45.3 overs in a Group E match of the Vijay Hazare Trophy here on Sunday.

After a stuttering start, Jaiswal and Rahane steadied the innings, adding 105 runs for the third wicket. The left-handed Jaiswal was then involved in a 47-run stand with Mulani for the sixth wicket. Some late hitting by Tanush Kotian (26, 16 balls, 2 fours, 2 sixes) took the Mumbai score to 264 though they lost wickets at regular intervals.

In reply, the Services openers, left-handed Rohilla and right-handed batter Chauhan, dominated the Mumbai attack. He smacked 15 boundaries and hit 4 sixes to send the opposition bowling on a leather hunt.

The opening duo put on 231 runs before Chauhan fell to Aman Khan. Rohilla continued to torment the Mumbai bowling further and took the score to 261 before being bowled by Royston H Dias for 135. Rahul Singh Gahlaut (19 not out) and Amit Pachhara (5 not out) took Services past the finish line in the 46th over.

Mumbai had opened the tournament with a facile win over Bengal on Saturday.

Brief scores of other matches in Group E: 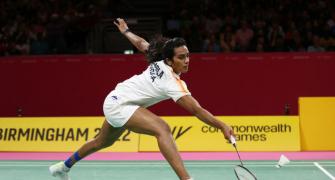 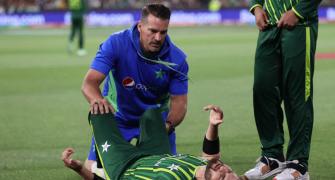 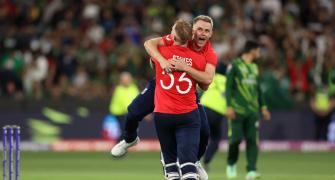 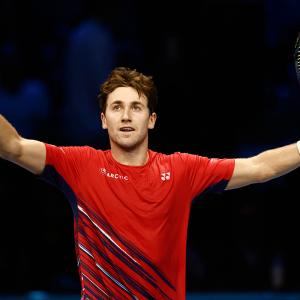 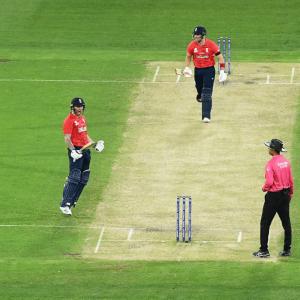