‘Young India has shown the way. Young India is showing that they are not afraid. What a win, what a magnificent win’ 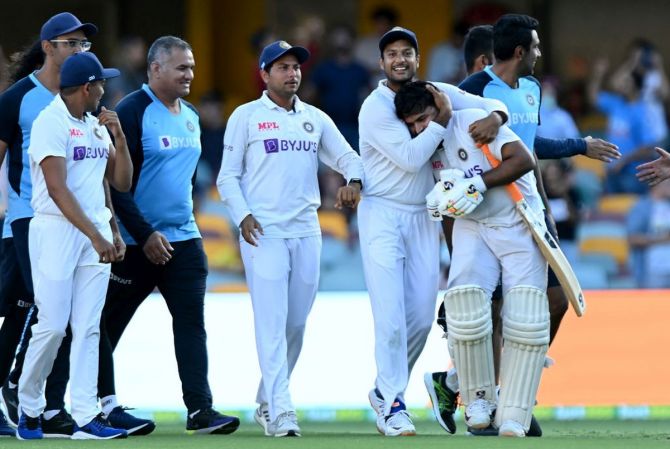 IMAGE: The Indian cricket team celebrates after their win over Australia in Brisbane on Tuesday. Photograph: Bradley Kanaris/Getty Images

"Young India has done it," said the legendary Sunil Gavaskar, terming the historic 2-1 come-from-behind Test series win over Australia as a "magical moment for Indian cricket".

The Indian team showed a lot of gumption to retain the coveted Border-Gavaskar Trophy with a historic three-wicket win over Australia in the fourth and final Test here on Tuesday, successfully chasing a 328-run target.

"Absolutely, this is a magic, magical moment for Indian cricket. They were not prepared to just save the game. They were wanting to go out and finish the tour in a blaze of glory. Young India has done it," Gavaskar told Sony Ten 3 after the match.

"Young India has shown the way. Young India is showing that they are not afraid. What a win, what a magnificent win."

Gavaskar was effusive in his praise for the entire group for their lion-heart effort, especially after the team missed seniors like Jasprit Bumrah, Ravichandran Ashwin and Ravindra Jadeja in the last match due to injuries.

Not to mention, regular skipper Virat Kohli didn't feature in the last three Tests as he flew back to India for the birth of his first child and in his absence Ajinkya Rahane led the side admirably.

"It starts with Shubman Gill playing such a wonderful innings this morning. Then the old war horse Cheteshwar Pujara making sure that there were no inroads made by the Australians in that middle session.

"And then Rishabh Pant coming in, once again promoted up the order at No.5 by this managing to Rahane, who has an unbeaten record now. Two out of the three Test matches here he has captained he has won.

"And before that he has captained India twice, he has won both those Test matches. Natarajan making his debut, what a debut it has been. Prithvi also. But what a tour, what a win," he said.

The batting legend opined that the performances of youngsters in the fourth Test proves that Indian cricket is in safe hands. In the absence of big players, India found new stars such as Shubman Gill, Washington Sundar, Shardul Thakur, Mohammed Siraj and Rishabh Pant among others who surprised the Aussies with their never-say-die spirit.

"This series win is even more magnificent because this time Australia had their full-strength team. The ball was turning on the fifth day. Yesterday also some balls kicked off, some kept low when Australia were batting. So, to score on that pitch, and with such ease, the last two-three wickets fell while trying to bring the target down," Gavaskar said.

"It felt really nice because this young Indian team has shown something different. In this win, to whom will you give credit? Mohammed Siraj took five wickets, Washington Sundar took three, Natarajan three. Then the way Washington Sundar and Shardul Thakur batted. Shubman Gill, Rishabh Pant, the way they batted. After seeing all this, and they are all young players, I think the future of the Indian cricket is so bright that we can have great anticipation for every upcoming series."

Gavaskar also praised the grit and determination shown by batting mainstay Chestehwar Pujara in Indian's second innings as he held the fort on one end with a patient 56 despite receiving numerous body blows from the Australian pace trio of Mitchell Starc, Pat Cummins and Josh Hazlewood.

"See, whatever I say about him will be very, very less. He put his body on the line for Indian cricket, for the Indian cricket team. He took blows on gloves, body, helmet but he didn't deter. His presence at the other end also gives confidence to young stroke players that there is someone holding the other end," he said.

"That's why his innings was so important because if India had lost two wickets in the second session, it would have made things difficult. He held the fort together until the second new ball. And with that, Pant grew in confidence and see, what unfolded. It's such an extraordinary day."