Wish Team India on a win to remember! 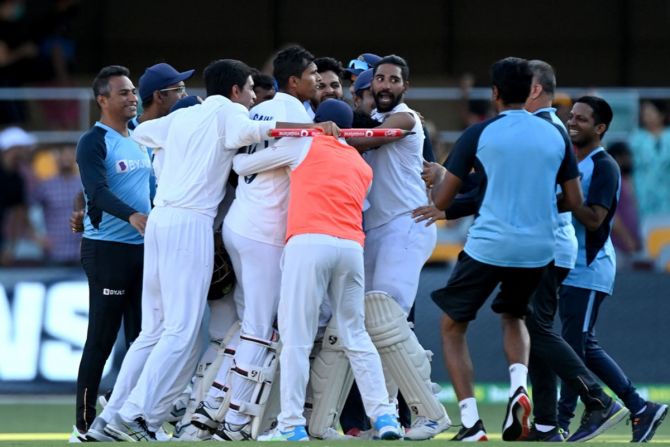 IMAGE: The Indian team celebrates its historic win over Australia at the Gabba in Brisbane, January 19, 2021. Photograph: Bradley Kanaris/Getty Images.

When India drew the Sydney Test against Australia, leaving the series tantalisingly poised at 1-1, and headed to Brisbane for the fourth Test, the decider, the home team could be forgiven for assuming they would win the match and series.

Consider the stats: The highest target chased down at Brisbane is 236. And that was seven decades ago.

Further, the last time Australia lost a match in Brisbane was in 1988!

And when the Indian pacers Mohammed Shami, Umesh Yadav and Jaspreet Bumrah sat out with injuries along with spinners Ravindra Jadeja and Ravichandran Ashwin, Australia's confidence levels must have shot up.

Essentially, India's pace attack was in the hands of newbies Mohammed Siraj (2 Tests old), Thangarasu Natarajan (debut) and Shardul Thakur (who had lasted all of 10 balls in his first Test), and Washington Sundar the spinner (debut).

Natarajan, Thakur and Sundar accounted for 9 Australian wickets in the first innings before Sundar and Thakur staged a rearguard action with the bat in India's first innings, scoring 129 runs between them and taking the team to just 33 runs short of the Aus score.

In Australia's second innings Siraj grabbed his first 5-for, and with Thakur bagging 4 wickets, restricted the home team to 294.

India in its second innings did not once take its eyes off the ball. Shubhman Gill scored a fluent 91, setting the stage for an improbable win, and Rishabh Pant capitalised on it with a starry 89.

And making the Brisbane Test go into the history books, for it not only made India win the series 2-1, but it is also the first time that India had a back-to-back Test series triumphs against the mighty Australian team.

So, please wish Team India on a win to remember!

Please mail your wishes to sportsdesk@rediff.co.in and we will publish them on Rediff.com!