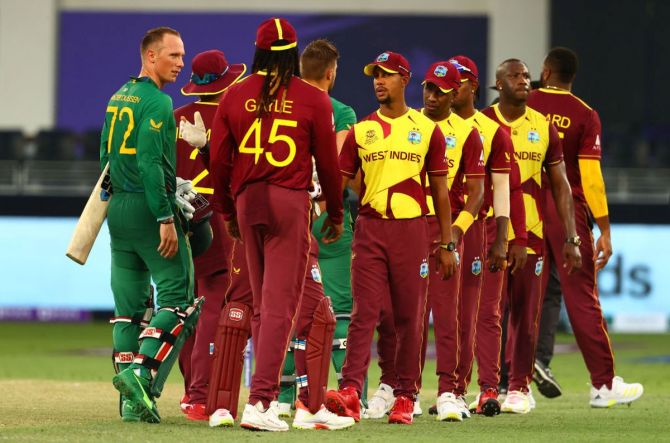 IMAGE: The West Indies and Bangladesh need to come up with something special after losing their first two matches in the T20 World Cup. Photograph: Francois Nel/Getty Images

Their campaigns thrown haywire by back-to-back defeats, defending champions West Indies and Bangladesh will be locked in a do-or-die battle when they square off in a crucial Group 1 Super 12s match of the T20 World Cup, in Sharjah, on Friday.

While the West Indies lost to England and South Africa, Bangladesh were defeated by Eoin Morgan's England after going down to Sri Lanka.

Both teams need a win to keep their semi-final hopes alive.

The West Indies desperately need to sort out their batting woes. In their campaign opener against England, they were bowled out for 55 and all their batters were guilty of throwing away their wickets going for big shots instead of rotating the strike and building the innings.

In their second game, the two-time champions slightly tweaked their no-holds barred approach, sending Lendl Simons to anchor the innings, but the opener was painfully slow, managing 16 off 35 balls. 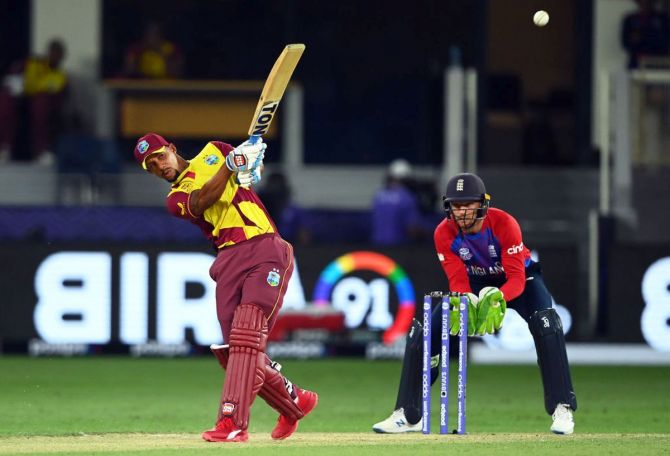 IMAGE: Lendl Simons will have to fire and give the West Indies a strong start. Photograph: Alex Davidson/Getty Images

Simmons's innings resulted in the other batters, including Evin Lewis who hit a quick-fire half-century, to take risks and in turn lose their wickets.

The West Indies lost eight wickets for 64 runs between the 11th and 20th over and put up a below-par target. Going ahead, Simmons could be replaced by Roston Chase, who anchored the innings well while scoring an unbeaten 54 in the warm-up match against Afghanistan.

A useful bowler, the Barbadian can also give the team another spin bowling option. The West Indian bowlers have also looked ordinary with not enough runs to defend.

Only left-arm spinner Akeal Hosein was impressive. Additionally, the UAE conditions do not suit West Indies' 'big-hitting' style of play. They are yet to register a win in seven outings, including the two warm-up games played ahead of the tournament. On the other hand, Bangladesh are familiar with the sluggish sub-continent tracks but failed to exploit them.

A lot was expected from Bangladesh, having come into the tournament as the sixth-ranked team which had beaten the likes of New Zealand and Australia. But the Mahmudullah-led side has been inconsistent throughout the tournament.

They have won only two of their five matches so far.

In Mohammad Naim, Liton Das, Shakib Al Hasan, Mahmudullah and Mushfiqur Rahim, Bangladesh have some talented batters but they have failed to fire in unison.

Their bowlers also lacked discipline and will have to put up a much-improved show, as the West Indies, although struggling at the moment, have a formidable batting line-up studded with match-winners.

Despite the many issues plaguing the side, Bangladesh could have a slight edge going into the game, having already played a day match on Sunday. 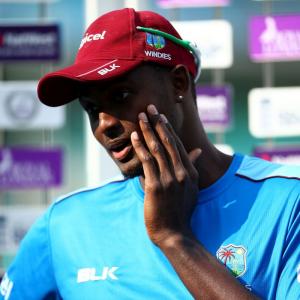 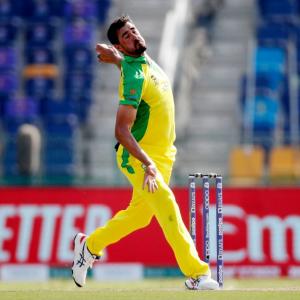