'Every player has a different role in the team and those roles can change in the middle with each game.' 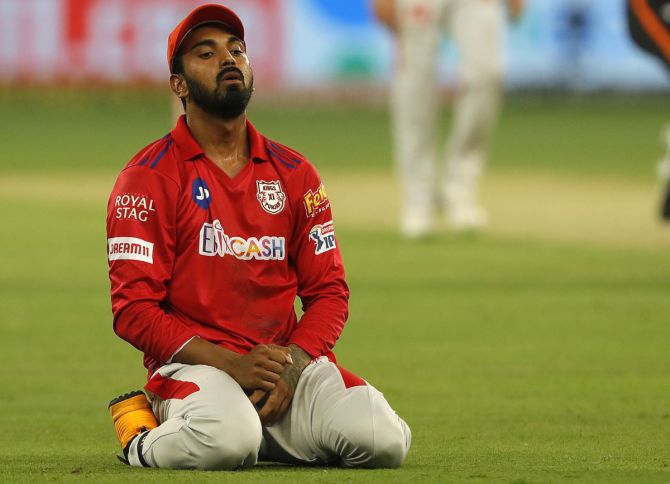 Strike rates are over-rated, said Kings XI Punjab captain K L Rahul, brushing aside criticism of his bottom-placed team which lost its fourth match on the trot, failing miserably in a chase of 202 against SunRisers Hyderabad, in Dubai, on Thursday.

Kings XI lost by 69 runs as Rahul could manage only 11 off 14 balls at a strike rate of 68.75. His innings featured no boundaries despite batting in the Powerplay.

"I think strike rate is very, very overrated. For me, it is only about how I can win games for my team and on a certain day if 120 can win a game for my team then I will do that. This is how I bat and I like to take responsibility," Rahul said after the match.

The skipper, who has 313 runs in the six games so far including a century and two fifties and is the leading run-scorer of the tournament, was eventually dismissed by Abhishek Sharma in the seventh over.

Since he struck a 69-ball 132 -- the highest by an Indian in the IPL -- against Royal Challengers Bangalore, the swashbuckling opener has adopted a more sedate approach.

The 28-year-old said being the captain, one has to take responsibility and every player has a role assigned to him which can change based on the match situation.

"As a leader, you have to take responsibility. We all make mistakes. I am not saying that I have not made a few mistakes but you learn each day as a leader, as a batter. It is a partnership when we are in the middle as a batting group."

"Every player has a different role in the team and those roles can change in the middle with each game. So, I tried to do the best I can for the team and tried to assess the situation and played according to that.

"At the end of the day, to walk out of the ground knowing that I have got my team as close to winning or tried to win the game is the most important thing," he added. 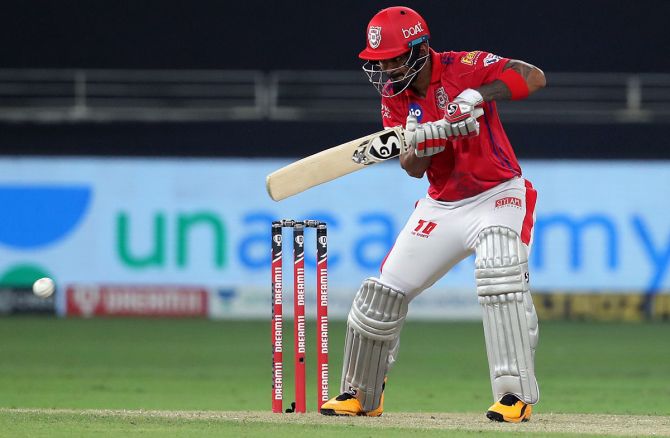 IMAGE: Since he struck a 69-ball 132 against Royal Challengers Bangalore, KL Rahul has adopted a more sedate approach. Photograph: BCCI/IPL

Asked if the team has become too reliant on him and Mayank Agarwal, Rahul said, "When you see a team at the bottom of the table, you start to think a lot of things aren't going right, it hasn't gone right but no teams have top six players firing.

"A couple of them will be in good form and a couple of them won't be looking good so it is important that the in-form players get as many runs as possible. The openers are always expected to give teams a good start," he added.

After a disappointing death bowling performance in the tournament, the Kings XI bowlers made amends against SunRisers by conceding just 41 runs in the last five overs while taking six wickets, with young leg-spinner Ravi Bishnoi (3/29) triggering a batting collapse.

"Arshdeep and Bishnoi - so good to see them among the wickets. They bowled high-pressure overs, and it's great to see how they held their nerve to bowl those big overs for the team at this platform," Rahul added. 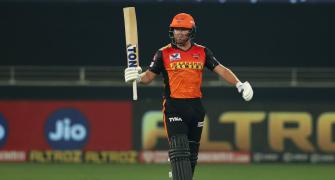 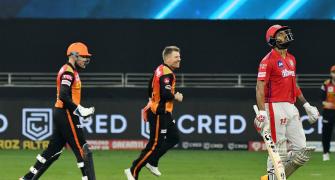 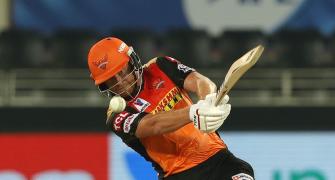 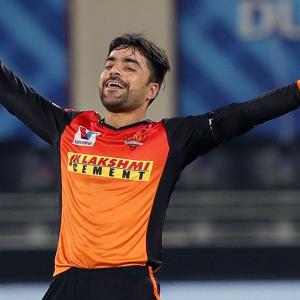