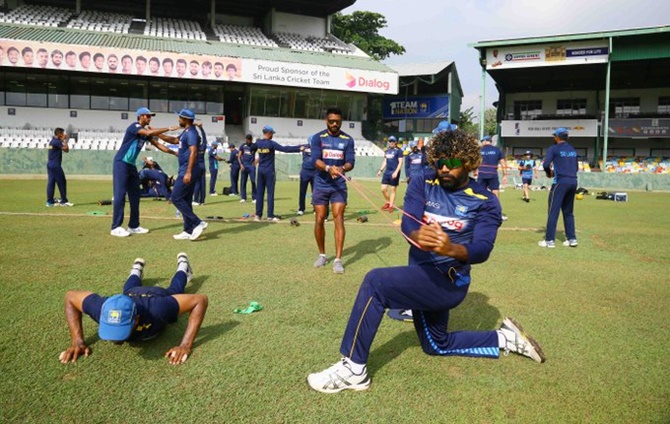 IMAGE: Coach Mickey Arthur said his prime focus now is to get the balance of the team right. Photograph: SLC/Twitter

He doesn't doubt their skills but newly-appointed coach Mickey Arthur feels education on various aspects of the game is the need of the hour for Sri Lankan cricketers.

Arthur, who was appointed as Sri Lanka coach in December last year, on Thursday said the Lankan players need to work on small aspects of the game like match management, game plan and strategy ahead of the ICC T20 World Cup to be held in Australia later this year.

"We have got a set of players who are very skilled and we just need to educate them a little bit in terms of game plans, strategy and match management. We need to make them understand when to take risks and when not," Arthur said on Thursday ahead of Friday's third and final T20 International against India in Pune.

"We are working hard on rotating strikes. Those are the little things we are working on. After every outing we need to get better and better and in eight months time we have to be competing (in T20 World Cup)," he added.

In his first assignment in the new job, Arthur said his prime focus now is to get the balance of the team right and unearth players for specific roles in the little outing Sri Lanka has before the T20 World Cup.

The 51-year-old said the numbers of talented players India are constantly producing in world cricket speaks volumes about their bench strength.

"India is tying out some really good players and there is abundance in talent here. The players that they bring in just stand up and do their job. It shows how strong structure they have now," said Arthur, who has also coached Pakistan, Australia and South Africa in the past.

Asked why former captain Angelo Mathews was not picked in the playing eleven for the second T20 in Indore, which they lost by seven wickets, Arthur reasoned: "It was my first T20 with the team and I relied on starting with where they finished."

"Angelo brings us a wealth of experience. So we need him to start form a base and then look at how we can tinker with the team and how we could get specific roles for everybody. That'll still take us a little bit of time," he said.

"The only reason we didn't play him (Mathews) was simply because we were starting from where Sri Lankan finished in their last T20 series. And he (Mathews) hasn't played for 16 months in this squad."

With batsmen dominating bowlers in T20 cricket, the Sri Lankan coach said it is time to strike a balance between bat and ball.

"I think pitches. When the pitches offer a little bit for the bowlers, it's really good. Getting rid of the powerplay? I'm not sure. Look, I don't think spectators wanna come to games and just see sixes and fours. It gets a bit boring," Arthur said.

"I think you want to see bouncers and slower balls. You want to see the bowlers getting a little bit advantage. That could be spin bowlers as well. So, I think pitches and ground size too. The grounds are too small and they don't aid spinners then."

Arthur said now-a-days it is difficult for any batting team to set a target in T20 cricket.

"The wickets here (in India) are really good, so you have to score 170s. I have told players that try and put targets in T20 cricket because sometimes you go out there thinking I will get 180 and take too many risks while setting and then get all out for 140 and later realise that maybe 150 could have won us the game," he said.

Arthur also spoke about his past experiences with Australia, South Africa and Pakistan, saying he enjoyed his three-year stint with Pakistan.

Assessing the wicket on offer here, he said the pitch had little grass on it, which could aid pacers.

Sri Lankan are trailing the three-match series 0-1 after the first T20 was washed out in Guwahati.