Should India play 3 spinners in the Rajkot Test?

What should India's playing 11 be for the 1st Test against England? 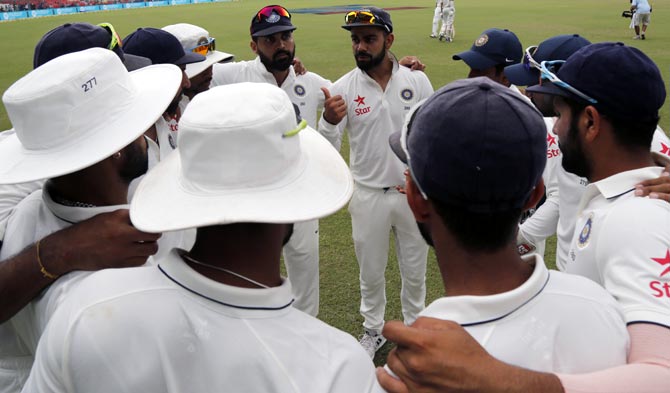 As we head into the opening Test between India and England, which begins on Wednesday, November 9, cricket fans wonder if the Rajkot pitch will be a turner like pitches in the recent home series against South Africa and New Zealand have been.

India, who registered back to back series victories against South Africa and New Zealand, haven't lost at home in four years, and for this it has to thank turning pitches and magical spinners.

The last time India lost at home, it was curiously against England.

The Englishmen upset Mahendra Singh Dhoni's side 2-1 in a four Test series in 2012, and those wins came on wickets which aided spinners quite a bit.

The wicket at the Saurashtra Cricket Association stadium in Rajkot, which hosts its first-ever Test, has traditionally assisted spinners in domestic cricket.

So Ravichandran Ashwin and Ravindra Jadeja will be the first two names on Virat Kohli's team list for the Rajkot Test and the skipper may certainly consider including leg-spinner Amit Mishra in the playing 11.

Mishra was in terrific form in the ODI series against New Zealand last month, taking 15 wickets in 5 games.

India played two spinners in the three Tests against New Zealand, which it won 3-0. After England's abrupt collapse against spin in the second Test against Bangladesh a couple of weeks ago, Kohli will be tempted to include Mishra.

If India go into the first Test with three spinners as part of a five-bowler attack, it could pencil in all-rounder Hardik Pandya who bowls at 140 kmph these days and will add depth to the batting.

Who will Kohli and Coach Anil Kumble choose to partner Mohammed Shami?

Will it be Ishant Sharma, back in the side after recovering from chikungunya?

Or will Umesh Yadav get another Test?

India's batting line-up selects itself and the only slot open for debate is the No 6 slot.

If the hosts opt for six batsmen, Karnataka batsman Karun Nair will make his Test debut.

Who do you think should feature in India's playing 11 for the Rajkot Test?

Should India include Hardik Pandya?

Here is your chance to help Kohli and Kumble pick the Indian team for the first Test against Alastair Cook and his boys. :)

Please click the boxes below to select your India team for the Rajkot Test: 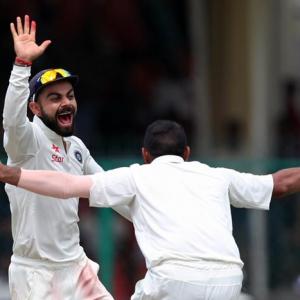 'How can I stay home when Test cricket is at my doorstep?' 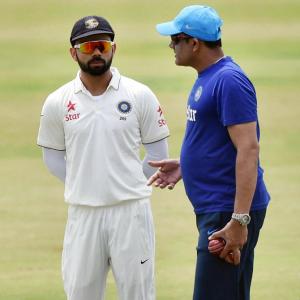