Eyeing a maiden IPL title, the fancied Delhi Capitals will face another litmus test in the form of a Kolkata Knight Riders unit brimming with optimism when the two sides lock horns in the Qualifier 2 match in Sharjah on Wednesday.

Delhi Capitals failed in their first big test when they lost to Chennai Super Kings in the first qualifier and another defeat will mean there will be no more examination for the strong squad, led by India wicketkeeper Rishabh Pant. Their bowlers crumbled under pressure in the closing stages as Mahendra Singh Dhoni produced a sensational finish to take CSK to their ninth IPL final.

Two-time winners KKR will no doubt take confidence from their victory against Royal Challengers Bangalore in Monday's Eliminator that dashed Virat Kohli's hopes of winning an IPL title with his longstanding franchise.

If the emphasis is on momentum and peaking at the right time then KKR will definitely fancy their chances in their next outing, notwithstanding their opponents' resources and depth in their squad.

Delhi Capitals, who topped the league stage with as many as 10 wins for a total of 20 points, are well aware of the task that awaits them.

Since Australian great Ricky Ponting took over as their coach, Delhi Capitals have grown from strength to strength as they finished second runners up in the 2019 edition before reaching the final last year.

This year their aim is to do one better and win the title. IMAGE: Delhi Capitals have posted five wins in the second leg of IPL in the UAE, but were beaten by KKR,. Photograph: BCCI

They are one of the most balanced sides in the tournament with a formidable batting line-up and a potent pace attack. In Shikhar Dhawan, Prithvi Shaw and Shreyas Iyer, Delhi boast of a solid top order. Pant, along with Shimron Hetmyer, look after the middle order, even as they missed the injured Marcus Stoinis' all-rounder prowess.

Dhawan (618) was the second highest run-scorer in 2020 and has already raked up 551 this season. His opening partner Shaw is also coming off a good game against Chennai Super Kings.

On the bowling front, the South African pace duo of Kagiso Rabada (2020 purple cap winner) and Anrich Nortje has proved to a dream pair. Then there is speedster Avesh Khan, who has taken 23 wickets so far in this season of the tournament, and he will back himself to add to his tally against KKR.

Delhi Capitals have posted five wins in the UAE leg of the tournament but one of their defeats has come against KKR, and what better opportunity for them to exact revenge than in the virtual semi-final contest.

It is easier said than done though, with Eoin Morgan's side enjoying a massive reversal of fortunes in the Gulf after enduring a disastrous first half in India earlier this year.

They just about managed to sneak into the play-offs at the expense of five-time defending champions Mumbai Indians, thanks to their better net run-rate.

Things changed for the better after the Kolkata-based side landed in the UAE and if their performance against RCB is any indication, KKR is raring to go and will want to do more than just end their campaign in the play-offs. KKR have turned things around in style, winning six of their eight matches in the UAE, including the Eliminator game against RCB. 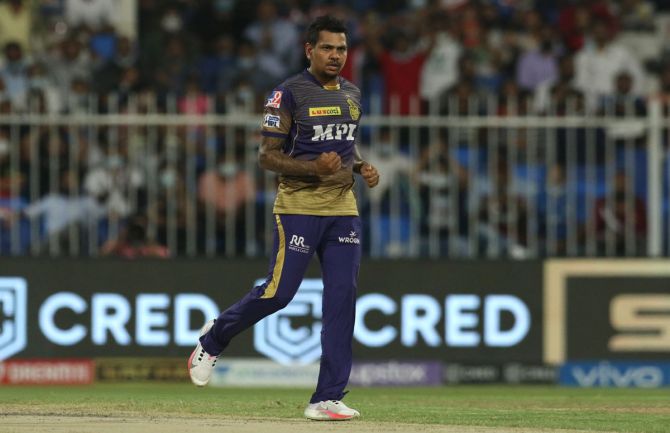 IMAGE: KKR have turned things around in style, winning six of their eight matches in the UAE, including the Eliminator game against RCB. Photograph: BCCI

On a pitch offering turn, KKR's spin duo of Varun Chakravarthy (16 wickets so far) and Sunil Narine, who is on a high after his superb all-round performance against RCB, will look to test the formidable Delhi batting line-up.

Batting hasn't been KKR's biggest strength this season and Delhi Caputals will look to capitalise on that.

Up against a potent bowling attack, the likes of Shubman Gill, Venkatesh Iyer, Rahul Tripathi (team's top-scorer this season with 393 runs so far) and Morgan himself will need to rise to the occasion if KKR is to make the final, where Mahendra Singh Dhoni's three-time winners Chennai Super Kings await. 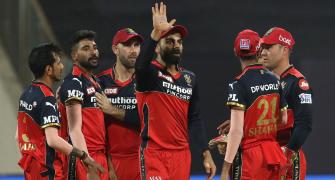 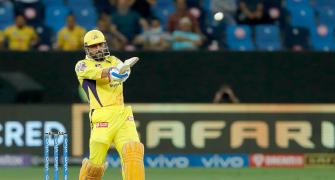 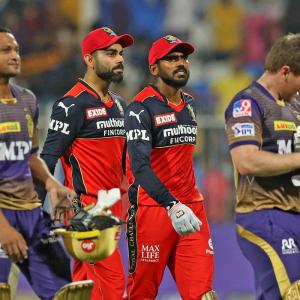 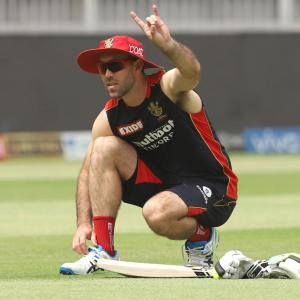