IMAGES from the opening T20I played between India and South Africa in Thiruvananthapuram on Wednesday.

IMAGE: Suryakumar Yadav continued in his rich vein of form striking another half-century on a difficult track. Photograph: BCCI

Arshdeep Singh and Deepak Chahar hit the South Africans hard with some magical swing bowling before Suryakumar Yadav's little gem on a difficult track ensured an easy eight-wicket victory for India in the first T20 International in Thiruvananthapuram on Wednesday.

A target of 107 on a pitch with underlying moisture and more than waist-high bounce at times was a struggle before Suryakumar (50 not out in 33 balls) released the pressure created by KL Rahul (51 not out, 56 balls) as India won the game in 16.4 overs to go 1-0 up in three-match series.

The pitch that former India head coach Ravi Shastri on air termed "not ideal for T20 cricket" had batters of both teams struggling to cope with both pace and movement.

It was Arshdeep (3/32) and Chahar (2/24), who basically clinched the issue for India within first 15 deliveries of the start after skipper Rohit Sharma called it right at the toss.

Once South Africa were reeling at 9/5 in 2.3 overs, the game as a contest was over and 106/8 even on a difficult track was a sub-par score.

The South Africans did bowl their heart out in defence.

Kagiso Rabada bowled an ideal Test match delivery that pitched on length and reared up while moving a shade and all Rohit Sharma (0) could do was to dangle his bat at the corridor of uncertainty.

Virat Kohli (3) got an express delivery from Anrich Nortje that kept climbing as he tried to have a go away from his body and the edge was taken by Quinton de Kock.

Surya, India's best T20 batter by a distance, got a streaky six when his attempted flick turned into an outside edge that flew over third-man for a maximum off Nortje.

The next six was a picture-perfect whip over deep square leg and then an inside out six off Keshav Maharaj indicated that he is India's in-form man.

Rahul's batting at the other end on the same strip became an ordeal as India had their lowest ever Powerplay score on board.

Just that there was no scoreboard pressure, Rahul could once play his waiting game and the only shot worth appreciating was a six off Nortje.

India's reserve seamers Arshdeep Singh and Deepak Chahar made the white Kookaburra talk with some incisive swing bowling that restricted South Africa to 106/8 in the first T20 International in Thiruvananthapuram on Wednesday.

With Jasprit Bumrah pulling out of the game due a recurrent back problem which has resurfaced once again, it gave left-armer Arshdeep (3/32 in 4 overs) and Chahar (2/24 in 4 overs) a chance to appreciably move the ball both ways, making full use of the nip in the air and the bounce off the surface.

South Africa were rocked in a space of 15 deliveries and before they knew what hit them, the Proteas were reeling at 9 for 5 on a pitch that had a fair covering of grass and certainly some underlying moisture.

Temba Bavuma (0) was nicely set up by Chahar with stock outswingers, which the skipper left alone before a banana inswinger had him bowled through the gate. The deviation into the batter was as big as it could be.

Arshdeep started by taking the ball a shade away from the left-hander and Quinton de Kock (1) in his bid to get a move-on dragged one back onto the stumps.

The other left-hander Rilee Rossouw (0) also chased a wide outswinger (inswinger by the bowler) to nick one to Rishabh Pant behind the stumps.

But it was the delivery by Arshdeep to David Miller (0) that will be remembered for a long time to come.

Miller was anticipating an outswinger and had committed on the front-foot only to find that the bowler had got one to bend back into him. His atrocious across-the-line shot would have resulted in only one thing and that was getting castled.

New T20 sensation Tristan Stubbs (0) didn't get enough wood to his slash over deep to a delivery from Chahar that bounced a shade more. The result was Arshdeep taking a well-judged catch diving in-front.

With five wickets gone, there was no coming back for South Africa and predictably there wasn't any change in the script.

Aiden Markram (25 off 24 balls), Wayne Parnell (24 off 37 balls) and Keshav Maharaj (41 off 35 balls) did try their bit in resurrecting the innings but the damage done during the first three overs of Powerplay did affect the approach of the visitors severely.

The bowlers like Ravichandran Ashwin (0/8 in 4 overs), Axar Patel (1/16 in 4 overs) and the normally profligate Harshal Patel (2/26 in 4 overs) had no problems in continuing to choke the run-flow. 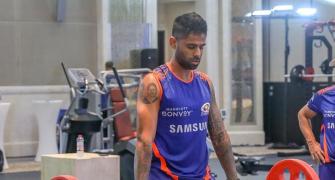 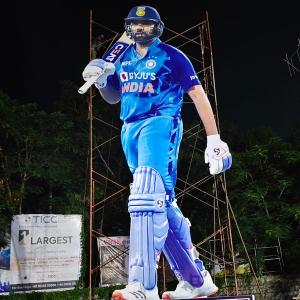