Images from the third One-Day International between India and England, in Pune, on Sunday. 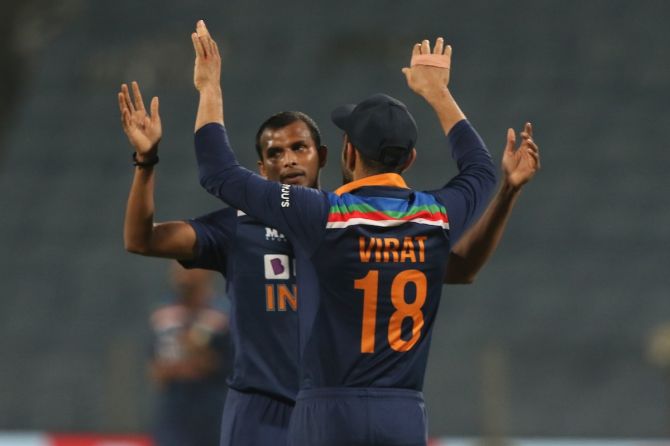 IMAGE: India’s skipper Virat Kohli celebrates victory with T Natarajan, who bowled the last over, in the third One-Day International against England, in Pune, on Sunday. Photograph: BCCI

Sam Curran's tenacious batting was in vain as India edged past England by seven runs in the third One-Day International to win the series 2-1, in Pune, on Sunday.

The 22-year-old England pacer top-scored with 95 as he hung around with the tail to keep the visitors in the hunt before Mark Wood was run-out in the last over to erase hopes of a sensational victory.

Chasing 330 for victory, England got off to a poor start, losing their top four batsmen inside 20 overs. It was not until Dawid Malan and Liam Livingstone got together that England had a ray of hope as they got close to the target with their run-rate under control. 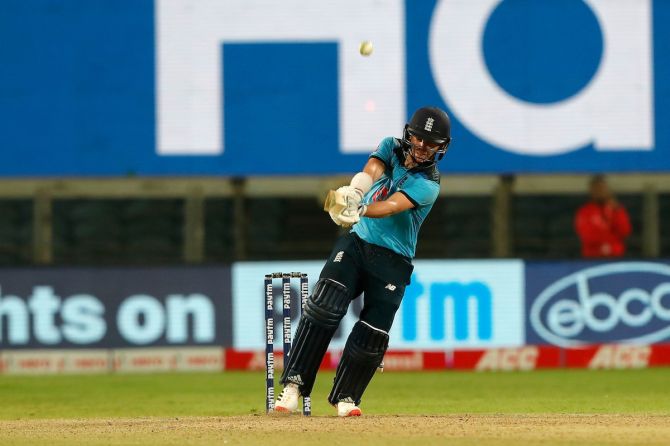 IMAGE: Sam Curran sends the ball over the boundary during his blazing, unbeaten 95. Photograph: BCCI

Once Malan, who scored his maiden 50, and Livingstone were dismissed by Shardul Thakur, Curran kept fighting with Moeen Ali and Adil Rashid, and then Wood, to take the game down to the wire.

Needing 14 off the last over, Wood was run-out, and it was just a matter T Natarajan sending down of the remaining deliveries tidily before India celebrated a tense victory. In reply, England floundered after the early departure of openers Jason Roy (14) and Jonny Bairstow (1).

Ben Stokes (35) and Dawid Malan (50) staged a strong fightback to rally the visitors, but it wasn’t enough against some precision bowling by the Indian pacers.

Curran chipped in with a gutsy knock in the company of Rashid (19) but they could not prevent Virat Kohli’s men ending the series with a flourish. 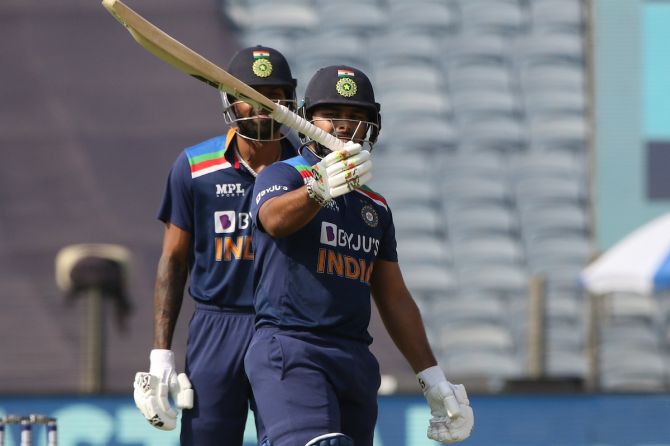 Pant's sparkling knock of 78 off 62 balls was well-supported by Hardik (64 off 44 balls), but India lost their last four wickets for a mere eight runs on another batting belter.

During his career-best knock, Pant plundered four maximums and five boundaries, while Hardik had five fours and four sixes in their 99-run stand for the fifth wicket. 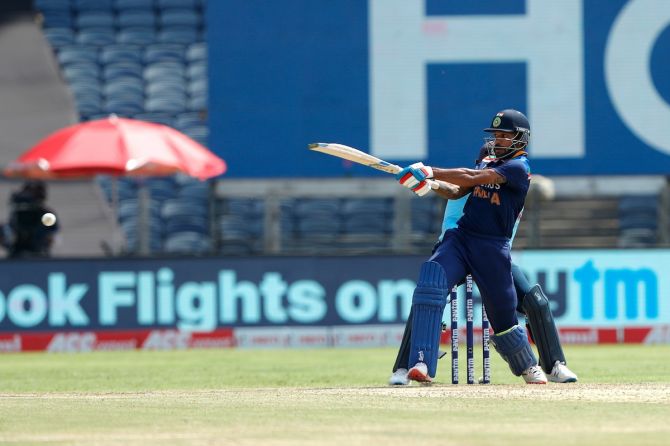 IMAGE: Shikhar Dhawan pulls one to the boundary. Photograph: BCCI 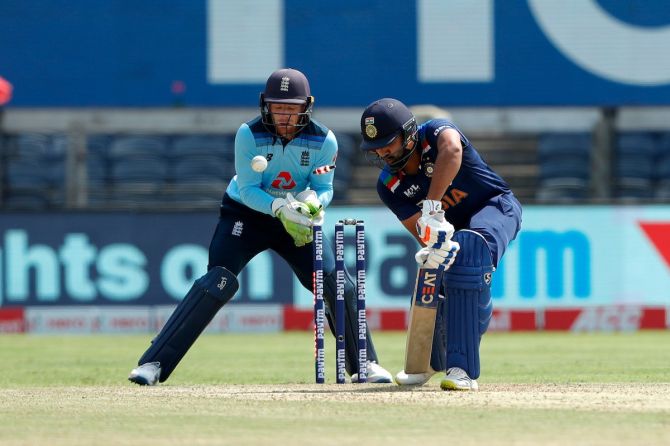 India made one change, with T Natarajan replacing Kuldeep Yadav, while Wood replaced Tom Curran in the England team.

India’s openers got going after a watchful start, as just 31 runs came after the first five overs. But they gained momentum gradually as England’s pacers got erratic and Dhawan brought up his 32nd ODI fifty. 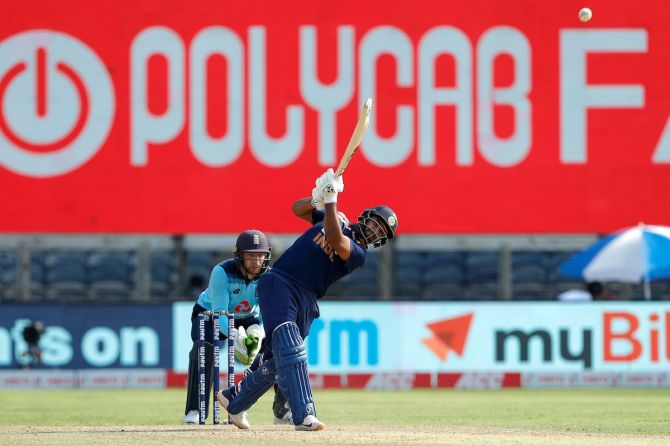 Just as India got past the hundred mark, Rashid got England the breakthrough.

Rohit was done in by the wrong one. He played away from the body and saw the ball go between bat and pad and clip the top of the off-stump. India were 102-1 in the 15th over. 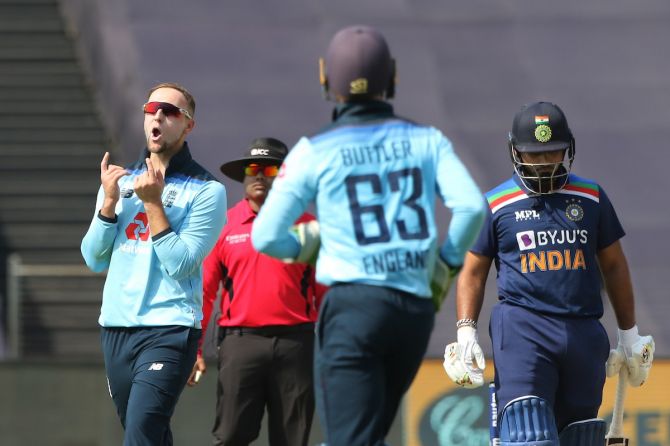 Dhawan failed to pick the googly and handed the spinner a return catch. India were 113-2 in the 17th over.

Skipper Kohli was next to depart after being foxed by Moeen Ali. He made room to play a turning ball, missed and saw it hit the leg stump.

India’s captain back was out for 11 runs and India were reduced to 117 for 3 in the 18th over. The pin duo of Rashid and Moeen brought England back into the game. 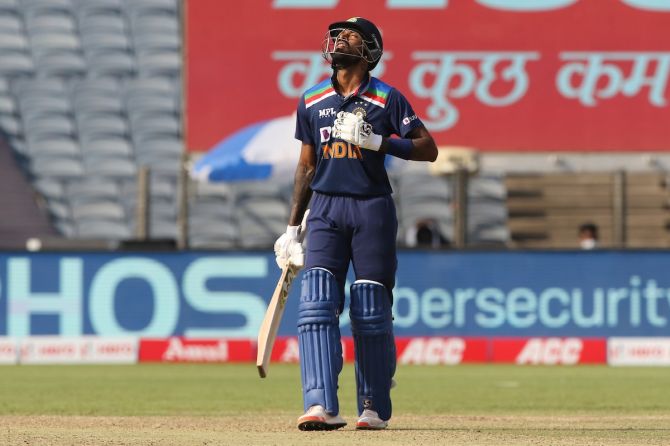 Leggie Liam Livingstone was introduced into the attack in the 24th over and he delivered immediately, dismissing K L Rahul for 7 with his second delivdery.

Livingstone bowled a low full toss and Rahul slog-swept only to find the ball travel to short fine leg, where Moeen completed a brilliant catch. India were down to 153 for 4. 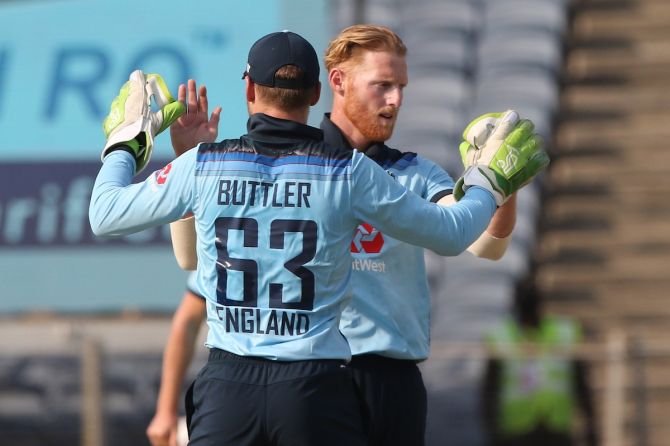 Rishab Pant and Hardik Pandya then steadied the slide and scored at a quick pace, finding the fours and sixes with as much ease as getting the singles.

Pant's blazing knock was ended by Sam Curran. The batsman poked at a fuller delivery and Jos Buttler stuck out his glove as he dived to complete a low catch. Pant was out for 78 off 62 balls and India were reduced to 252 for 5 after 36 overs.

Pant and Hardik were involved in a 99-run partnership. 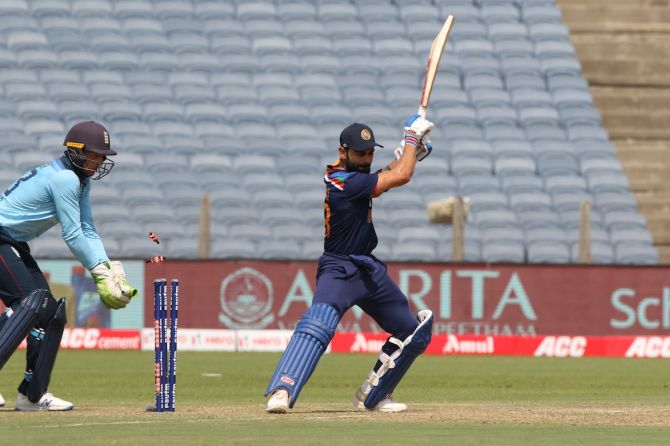 Hardik scored a breezy 64 off 44 balls, which included five fours and four sixes, before being bowled round his legs by Ben Stokes.

Krunal Pandya and Shardul Thakur then chipped in with 25 and 30 runs respectively before India were dismissed for 329 in 48.2 overs. 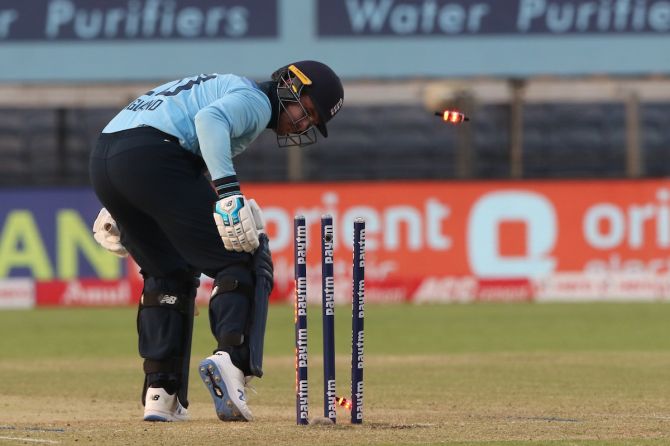 Bhuvneshwar got India an early breakthrough. He made one swing in and opener Jason Roy was left clay-footed, as the ball went past the inside edge and hit the top of the stumps. 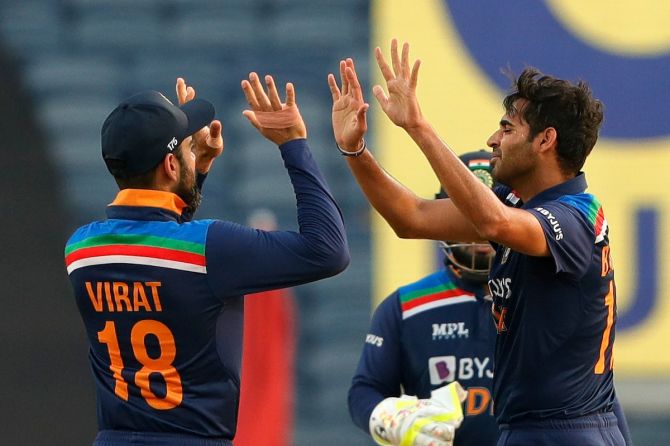 Bhuvi struck again in his next over, the third of the England’s reply, hitting Jonny Bairstow low on the pads as the batsman went across the stumps and played the ball to the leg side for a quick single. There was a big appeal for LBW and the umpire raised the finger.

England took the review, which showed it was the umpire's call as the ball was hitting wickets. England were 28 for 2 after three overs. 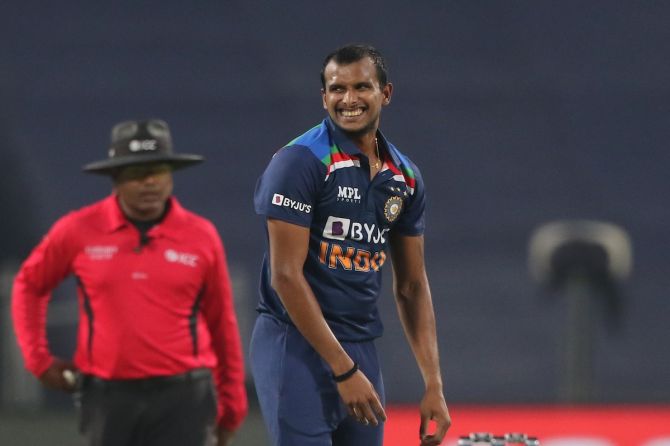 It only got better for India when T Natarajan dismissed Ben Stokes.

Tempted by a full toss, Stokes came down the track and pulled it right it to Dhawan at deep mid-wicket. There was a check for no-ball, but it was all clear and Stokes had to walk back after scoring 35 off 39, which included four fours and a six. 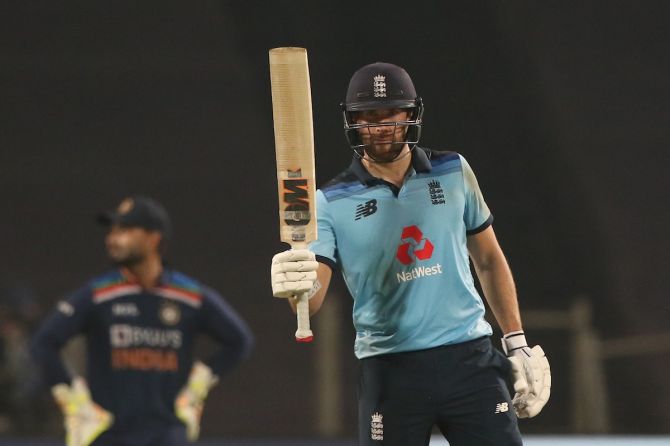 Shardul Thakur then made a big shout for LBW against Jos Buttler off the first delivery of his third over, but the umpire was not interested. Kohli took the review and won it! The ball nipped back in and Buttler was hit on the back pad. The impact was on middle and leg and that was out. Buttler was gone for 15 and England reduced to 95 for 4 in the 16th over.

Liam Livingstone hit four fours and a six, but just when he looked well-set for a big score he handed Thakur a return catch off a full toss on his follow through. He was out for 36 and England’s chase was looking bleak as they were reduced to 155 for 5 in the 24th over. 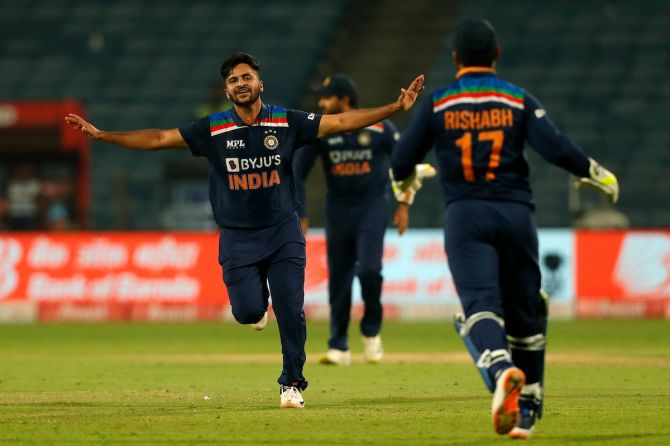 Malan soon brought up his 50. However, England’s joy was short-lived as Thakur struck again for his third wicket, having the well-set batsman caught by Rohit Sharma at mid-off.

Six wickets down, England were staring down the barrel at 168 for 6 in the 26th over. 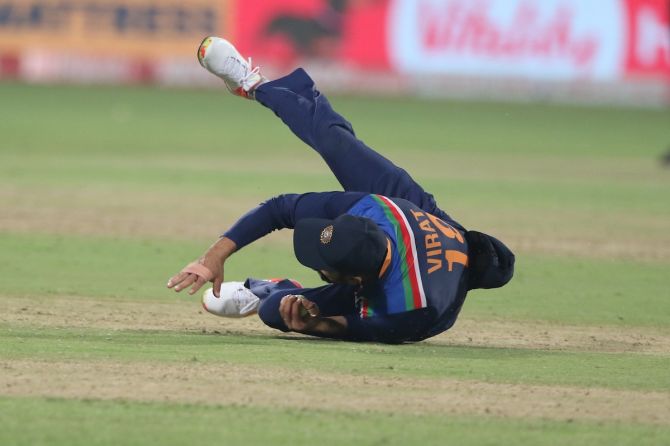 Moeen Ali put up a semblance of a fight, but with a mountain to climb it proved too little. In his attempt to score big and fast he mistimed his shot off Bhuvneshwar and was caught by Hardik at mid-off. He was for  29 and England were down to 200 for 7 in the 31st over, with Bhuvneshwar picking his third wicket.

Sam Curran and Adil Rashid were then involved in a 50-run partnership to frustrate India’s hopes of wrapping it up early before the latter perished for 19 off 22 balls, giving Thakur his fourth wicket, as Kohli took a stunning one-handed, diving catch to his left at mid-off. 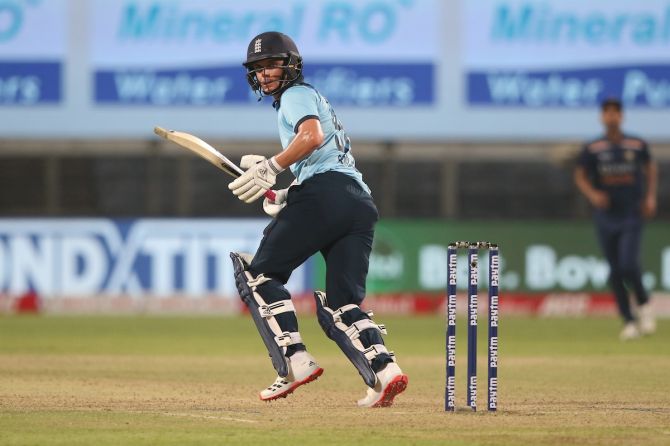 Curran, dropped by Hardik Pandya on 22, brought up his maiden fifty and then went all guns blazing. He and Wood put on a 50-run stand as 18 came of Thakur's last over and England inched close to the target.

England needed 14 off the last over, bowled by Natarajan. However, Wood was run-out to the first ball.

Curran was unbeaten on 95 off 83 deliveries, which included nine fours and three sixes as England ended their 50 overs on 322 for 9. 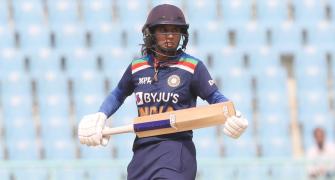 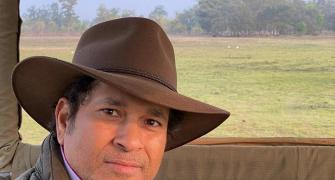 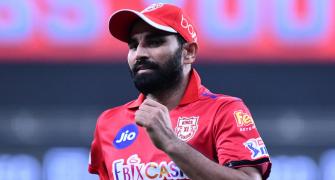 Fit-again Shami gears up for IPL 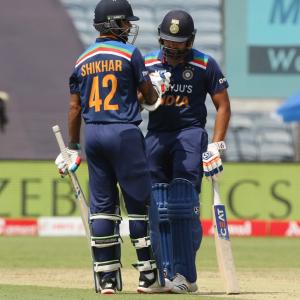 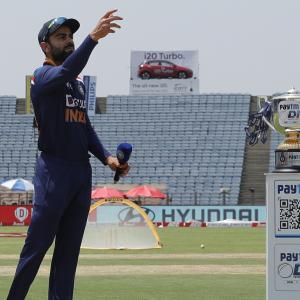